I’m so baffled and put off by their support for this title. I loved the initial release and was imagining how they might build on and improve the campaign, but all we got is a DLC set in the future after the Three Kingdoms period and now another campaign in the past. We don’t even have a titular Three Kingdoms setup yet, and it’s very difficult for that sort of arrangement to happen in-game!

Argh. Sounds like this may be another DLC I skip. I really expected more from them on this, especially since it sounded like it performed very well?

A big problem is basically how the game plays - which is effectively 5 Kinds of Heroes with some chaff. You need a setting with some kind of hero figures, else the game just feels wrong. 8 Princes kind of worked because it’s a period of history nobody (even Chinese) knows anything about, so they can fill in the gaps. But other periods are much harder to squeeze in.

Three Kingdoms is trying very hard to squeeze China into a Total War box, and it’s not (imo) particularly successful at it. TW:3K doesn’t at all feel close to what i’d imagine 3K battles were about. Maybe on some high level strategic sense there’s a bit of interest there.

Personally i’d hoped that 8 Princes would roll into the “barbarian almost-takeover of China in the 380s” which split China in two for 200 years - and it kind of feels like that’s what they were going for. According to that press release, if you read between the lines, it’s possible the reason DLC has been slow is because they retooled and went a different direction when 8 Princes didn’t do so well (it’s 36% positive on Steam).

I’m so baffled and put off by their support for this title. I loved the initial release and was imagining how they might build on and improve the campaign, but all we got is a DLC set in the future after the Three Kingdoms period and now another campaign in the past. We don’t even have a titular Three Kingdoms setup yet, and it’s very difficult for that sort of arrangement to happen in-game!

Yeah, I liked the base game too but only played it a little. Cause nowadays you don’t play strategy games till they get couple of years of support, do you? Even with the initial polished release. And CA were very nice with the initial roster of playable factions. Each of them feels unique in some way and if I knew that the game will get no support I’d be happy to play it as released. And patches made some big changes like changing roles of commander class. And with important characters doing their thing you can get very different campaigns even for the same factions. So I’m excited about patches but not expansions.

According to that press release, if you read between the lines, it’s possible the reason DLC has been slow is because they retooled and went a different direction when 8 Princes didn’t do so well (it’s 36% positive on Steam).

I’d expected them to then release some other type of DLC that improves the main campaign. Like adding some other type of factions, probably Northern nomads or something, that would be playable in both main campaign and 8 princes. Even if they weren’t that important historically they were always in the background of history of China. Instead we’re getting another starting point, is it really different from 8 princes even if there are some familiar faces?..

It’s my understanding that you will be able to carry over your campaign from this new DLC to the main campaign. So it has a bit more interactivity than 8 Princes. But yea, I’m not crazy about how they are doing the DLC for this game either.

Notes for tomorrow. Looks like they copied over the new emperor mechanics to all endgame declared emperors. Also big unit & morale changes.

Heaven is to be rent asunder, earth shall fall away. This poem was written by former Han Emperor Liu Bian’s wife when they were both poisoned by Dong Zhuo. It comes from Total War: Three Kingdom’s base campaign, yet it perfectly fits the new Mandate...

I think PC Gamer and PCGN have their reviews live now as well, maybe a few others.

Hah, it sounds like this is the Fall of The Samurai expansion (best expansion) to Shogun 2 with more differences between factions. I wonder how the diplomacy will work if there’s 2 sides to the conflict from the start.

Just saw this tweet a bit ago, and was curious about others’ thoughts. 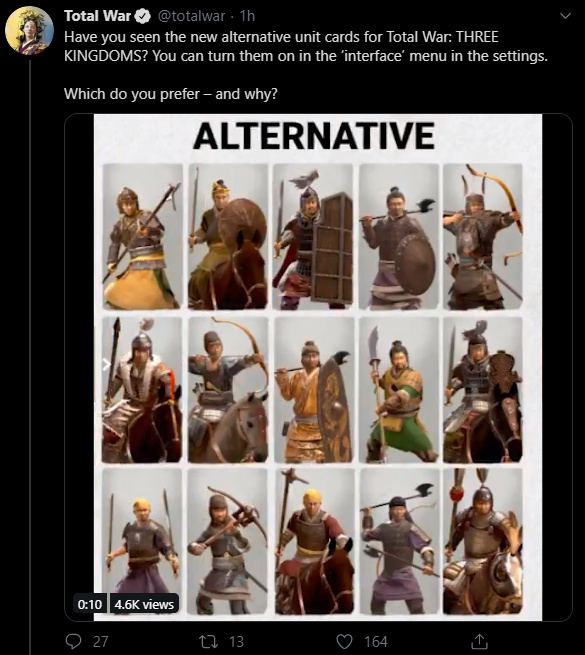 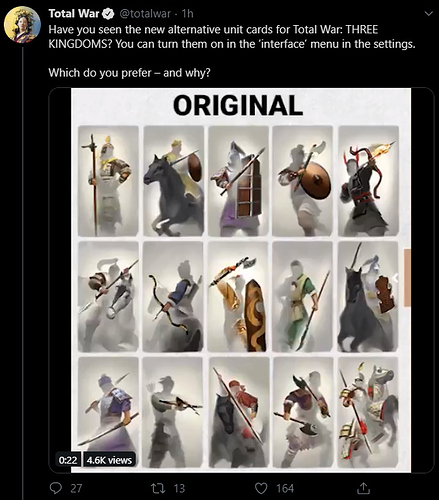 I havne’t picked this one up yet (I’m really more a Warhammer guy), but I have to say those original icons look amazing to me. Very cool, stylish, and servicable showing the weapons being used more than the units. I like it a lot. The Alternate ones look like regular 3D models that seem totally fine, very good, but not as good in my opinion.

Nothing beats a good 2D art though, I wish more games would just use awesome 2D art instead of trying to use 3D models as icons/portraits.

I prefer the originals, partly aesthetically but also functionally. The more abstract unit cards focus on what the unit does and further serve to make the hero characters pop in the UI. And the heroes are very much the game’s focus, at least in Romance mode.

Anyone picked up the new expansion? I’m really impressed with it so far. Although I have noticed that turn resolution times seem to have degraded.

I agree that original shadowy ones are cool. In other games you have all those icons that make distinguishing units hard. You want to see weapons and armor. Does this guy have an armor or is it a fancy shirt? Is it a spear or a sword in this guy’s hand, I can’t see because of all the details and funny hat.

The base game has been on my wish list and I was planning on holding off for a bit to work on my backlog. But, on a recent 3MA podcast, most rated it as their game of the year. So, I will pick it up soon.

On a side note, steam tells me that this just launched:

English translation to come next month. Looks like it’s an iteration on IX and XI, so it’s not an officer RPG like X or XIII, but probably better mechanics and AI.

Probably at least a PUK to come, and 100s of officer portrait DLCs. 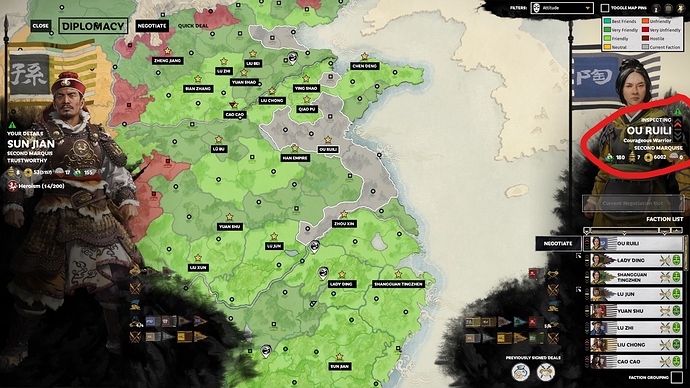 I’d like to see Eastern Jin and the Battle of Fei river… one day. That day will be some very distant time in the future though.

Hmmm I just noticed that three kingdoms --a total war game that I have avoided so far --has the “this is total war” achievement. An achievement I spent countless hours on in Rome 2 and Atillla… looks like it may be time to try again. (Atilla was easier because of the eastern empire interest rate).

I wonder which faction would be a good one for that?

Well thematically it should be done as Cao Cao.