Man, I’m just sitting here looking at Warhammer 3 in my steam account and pissed I can’t boot it up and play IE.

Man, I’m just sitting here looking at Warhammer 3 in my steam account and pissed I can’t boot it up and play IE.

By that definition, every LL in all TW:WH games is overpowered!

Hey, now; the Tomb Kings are just grumpy for being woken up and no longer possessing the ability to drink coffee. 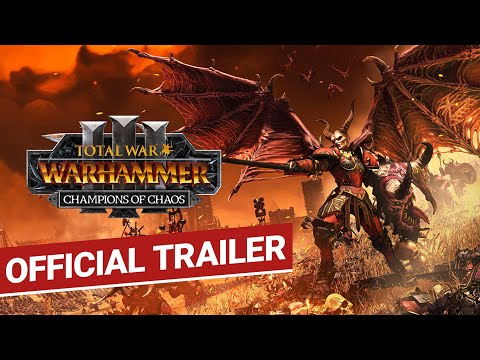 Just finished up an Ogre campaign and oh are they fun. The changes to main campaign help mitigate the awfulness of the demon portals opening all over but the realms are still pretty tedious. At least you don’t have to hunker your lord down in a city to get rid of the awful Chaos trait (as long as you fight the final Realm battle) and the AI won’t zip past you in the realm of Tzeetch. There is also a bit of global buff for getting a soul.

The best thing is that they are shooting cannonballs that both explode and roll through lines of infantry. Anything human size or smaller just gets wrecked. Monster size (like other ogres) they are just pretty good and against single entities they struggle, as they are not too accurate and even if every cannon ball hit they still do significantly less damage as a group than say a unit of Cathay’s Celestial Dragon Crossbowmen which can delete your Stonehorns if you are not careful (my super Leadbelchers do 2,944 total damage versus 4,720 total damage of some Celestial Xbows).

Also, they have Crushers. While Mournfang cavalry is great, Crushers are pretty much a straight upgrade. They can screen for your Leadbelchers and Ironblasters and defeat any monster or cavalry anyone sends at you.

I don’t think Leadbelchers and Ironblasters are going to beat a Skaven weapon team army in terms of sheer firepower but Leadbelchers are definitely worth bringing to take care of the enemy archers. While Ironblasters seem to have some nice potential I just don’t care for their firing arc. I’d rather have a Hellstorm or Plague Catapult, so make some allies.

Edit: I also realized that I never tried out the Scraplaunchers! To my credit I didn’t discover the wonders of Ogre range until after the main campaign as I was in love with Ogre melee (and the quest battles favor melee over ranged, so I focused on it too).

Oh, shoot, sorry - I read this yesterday and I really enjoyed it, thanks for posting! 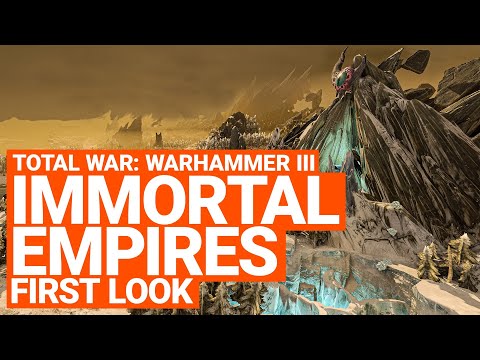 13 minutes of a contiguous shot - a wonderful fly-over of the entire map with descriptions and explanations for the locations shown. The map looks gorgeous, I’ve always loved how the War3 campaign map looked and this entire thing is exactly what I was hoping for. It’s so huge, I feel badly for every being impatient for this thing to drop - this is such a massive undertaking.

Really amazing job with piecing this map together. The map looks great and love hearing the advisor again!

I was linking this video to my cousin and was inspired to show him how much nicer/cleaner/easier to read the War3 map is and how I was hoping to see the old areas in the trailer and so I took a screen grab of the Silver Road (Thorgrim’s start location) from the trailer and found one I could get off someone doing a Let’s Play on YouTube of this Legendary Lord to compare. 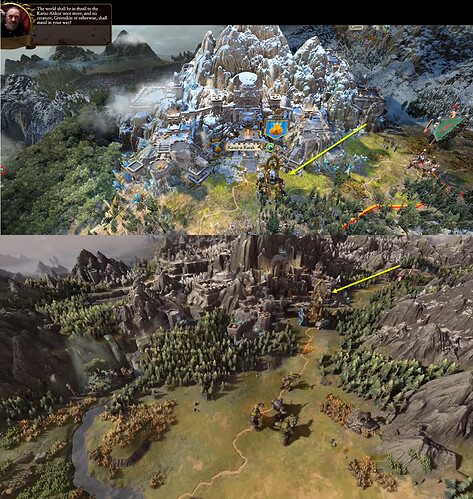 Is the top the new one?

Is that… a joke? I honestly can’t tell.

Content creators will be able to start showing off Immortal Empires tomorrow. There is also a multiplayer tournament this weekend which is always great as it shows off the new units, lords etc.

I am team this as a good sign that the deves are confident with the beta build!

Is that… a joke? I honestly can’t tell.

No. Maybe I misunderstood what you were saying?

The top pic is the IE and you can more easily see the Dwarf Keep.

I get it! Yes, much easier to see!

So when I transitioned to TW:W3 from TW:W2 Mortal Empires, I (like many others) had some serious issues with the campaign map. I get terrible frames on TW3 (like 20-30) and a solid 60 on TW2. I also, at first found TW3 aesthetically displeasing (fancy way to say I thought it was ugly). Revisiting Mortal Empires though I find the UI and campaign map of TW3 superior.

I’m not clever enough to explain why but I’m with @Scotch_Lufkin on the map being cleaner and easier to read. I also find it just more colorful and prettier now. The different colors of corruption, while at first a bit off putting, I now appreciate how easy it makes at a glance to tell how bad it is in a province and who the main culprit is.

I snapped a couple screenshots of locations both in Mortal Empires and TW3 for a rough comparison. These were taken without corruption (well, Skaven corruption doesn’t really have a visual). 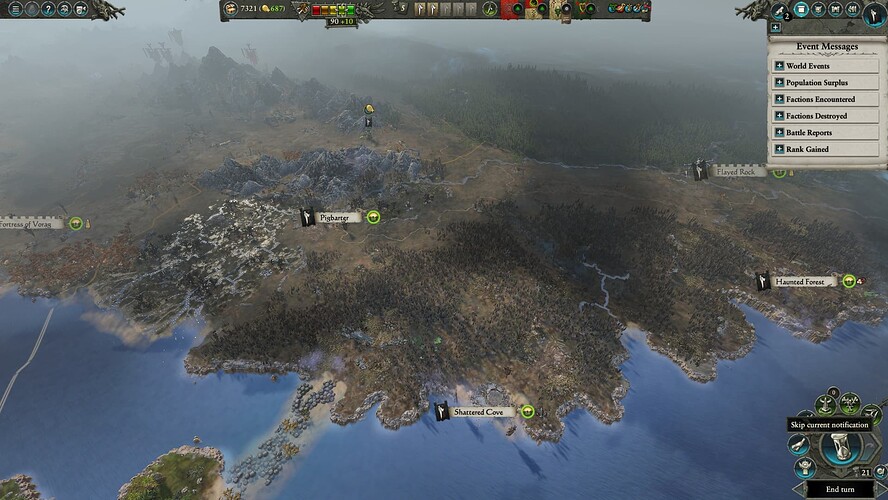 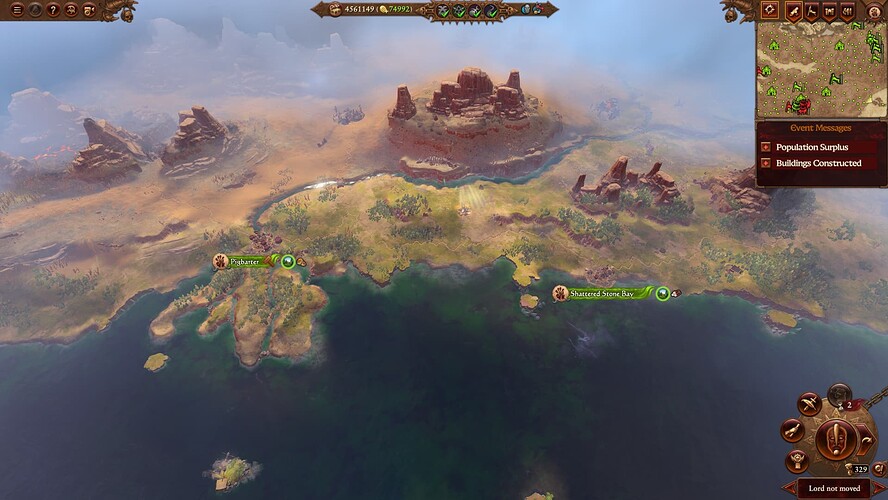 Kislev also got a serious makeover 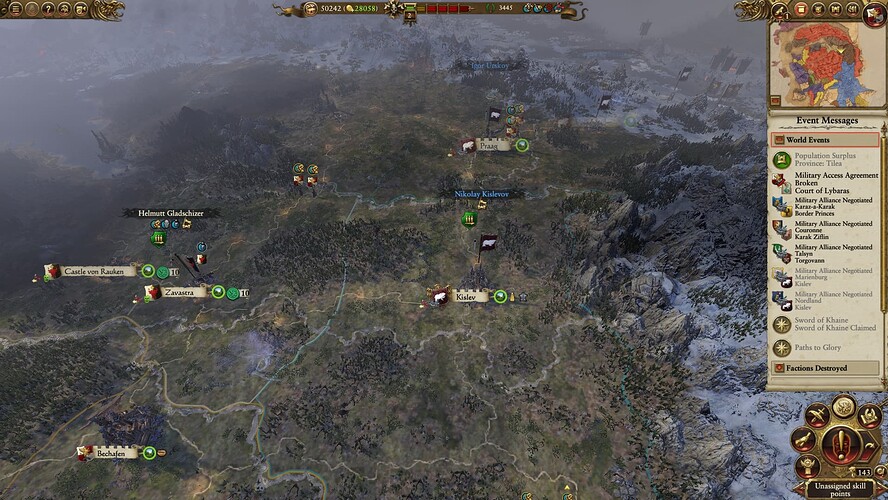 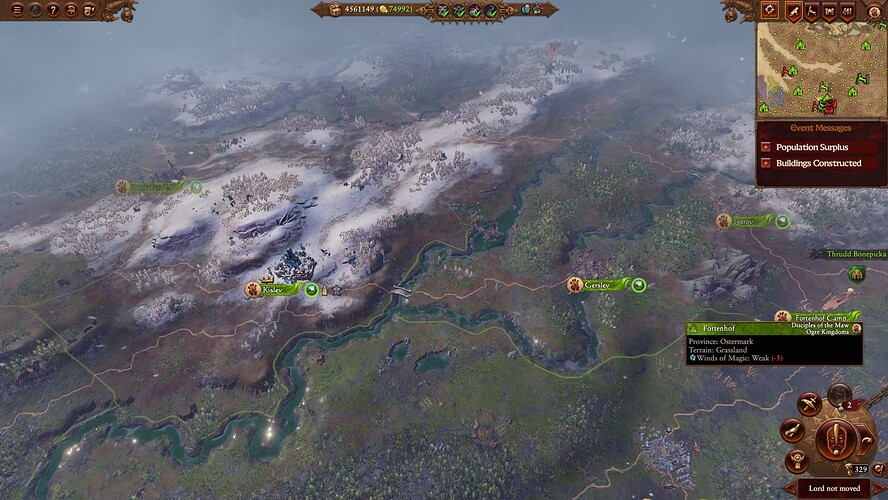 I think the Kislev one really highlights the ease and readability. The rivers are really pronounced and the roadways are much clearer.

Again, the TW3 campaign map makes my FPS chug but I think it is quite lovely and really look forward to the Immortal Empires map.