The top pic is the IE and you can more easily see the Dwarf Keep.

Is THIS a joke, I honestly can’t tell?

The top pic is War2, the bottom is from the IE trailer. The bottom looks 100000x better, I am excited.

OMG I am so confused.

Warhammer 2 is the top picture, Warhammer 3 is the bottom picture. Warhammer 3 looks oodles better. That’s it.

Sorry, I wasn’t joking, just backwards. Nevermind me as I shouldn’t be posting while multitasking during work.

You’re both wrong! That’s a picture of Candy Crush Saga on an iPhone 6!

So when I transitioned to TW:W3 from TW:W2 Mortal Empires, I (like many others) had some serious issues with the campaign map. I get terrible frames on TW3 (like 20-30) and a solid 60 on TW2.

I had this issue as well, but are you saying the TW3:ME runs better now than the TW3 campaign? Or just that even running worse you can put up with it due to the new map being much better? 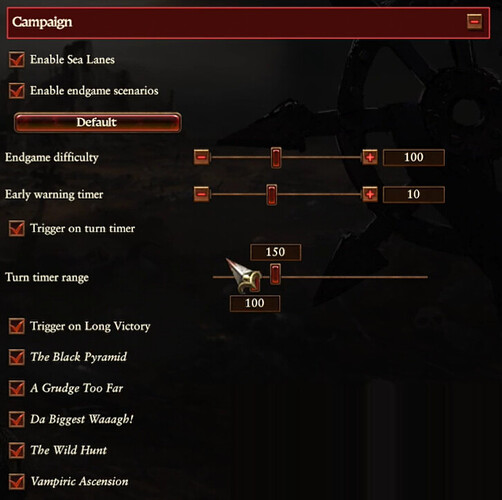 The only US stream I’ve found so far is this one - Twitch - and so I’m cherry picking (while I skip around in the video) info. I found this screen which I thought was great, as it’s exactly the kind of option/feature this mode needs where we have some fun mid- and late-game events to keep things moving along and challenging, in theory. And being able to turn some of them off that you may not like or be tired of seeing over time is great.

Also, this person mentioned the game was taking up about 103GB of space on his drive, so I thought I should mention that. It’s a big game.

One thing I don’t know if I’ve mentioned anywhere, is I really like how faction/lord selection looks in this UI. But seeing all the factions here was kind of wild, even if I knew on paper about what it would look like, this was still something else. 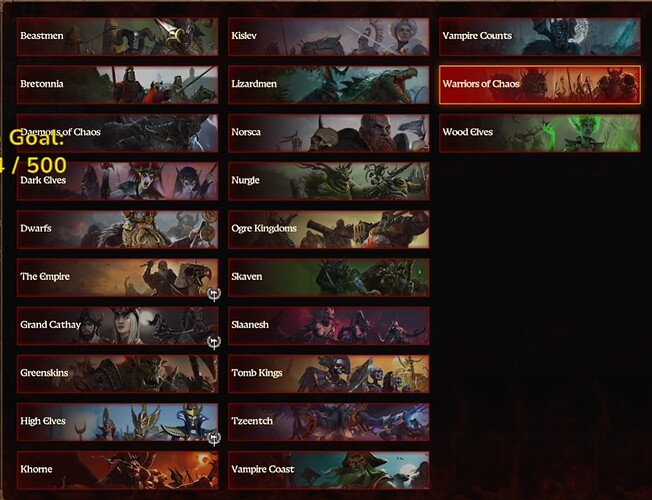 I also took note of the time it took for the AI factions to take their first turn. This isn’t going to be indicative of the entire game (as it progresses the AI has more to get done, you can see more of the map, and while there are fewer factions those that exist have more to do) but it’s a good start - the first End Turn click took just about 30 seconds, with 275 factions taking their go.

Also, the better/more fun objectives was shown a bit in another video I saw. Dwarf for example. 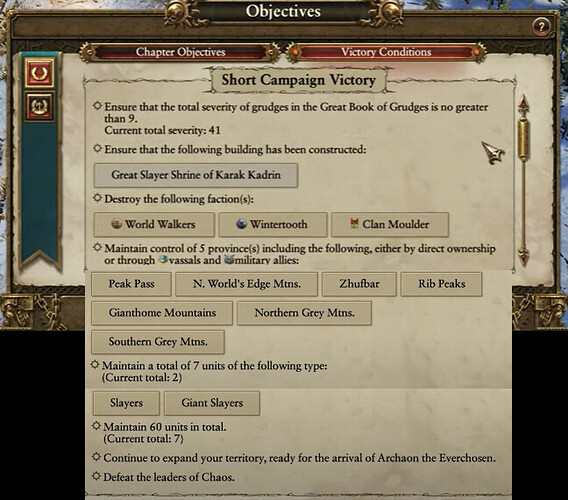 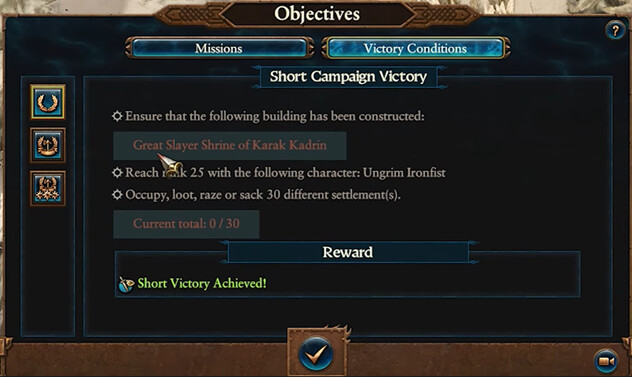 Worth noting that for completing this objective, there is an actual reward for doing so and while you could end your campaign here and call it good, if you kept going (presumably to tackle the Long objective) you have that option and can benefit from the permanent boon provided by the short objective reward.

For several more example Short objectives and a look at some Long Campaign and Domination objective example, as well as a deeper look at the end game challenges and options, here is the video I am watching: 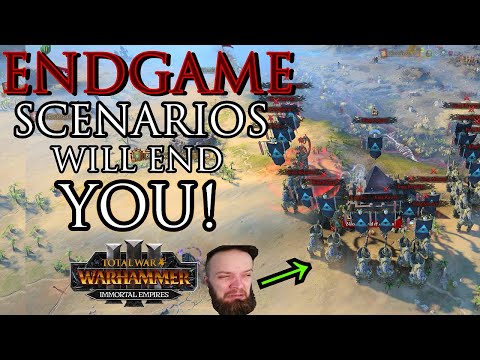 This video also talks about the imported Warhammer 2 maps and how many are very different than what we may be used too from War2 but also that they seem to have weather variations based on what’s happening on the strategy map, which will add to a good bit of map variety.

I’ve seen some streams popping up this morning. So far it is old factions on the new IE map. I admit to having tragically under played games 1, 2, and 3 (especially 3). However, the hype is building. I’m thinking this newest dlc plus the new map will be the game I imagined many years ago. Will it be enough to get me to sit down and finally dive in deep? I don’t know. But the hype is definitely building as I see where they have taken the game from late WTW2, to the iffy launch of 3, to the shaken up version launching (beta) in a few weeks.

Sorry I tried to be clear, I’ve only played the TW3 main (Realms of Chaos) campaign. I don’t know if the new campaign/map will run the same or worse (possibly better, but I don’t think so). Its definitely a case of even with the TW3 campaign map running worse I think the map looks better than TW2: Mortal Empires (there’s not any overlap with the Vortex campaign I believe, so harder to compare).

So, its your second point (“even running worse you can put up with it due to the new map being much better”) but I stress I am only talking about the TW3 Realms of Chaos map as I won’t have access to the Immortal Empires until you all do (unless you got some early access).

Edit: Okay so the best comparison is from that video @Scotch_Lufkin posted.

Here is the Silver Road in TW2: Mortal Empires (sorry there are no armies or much visibility) 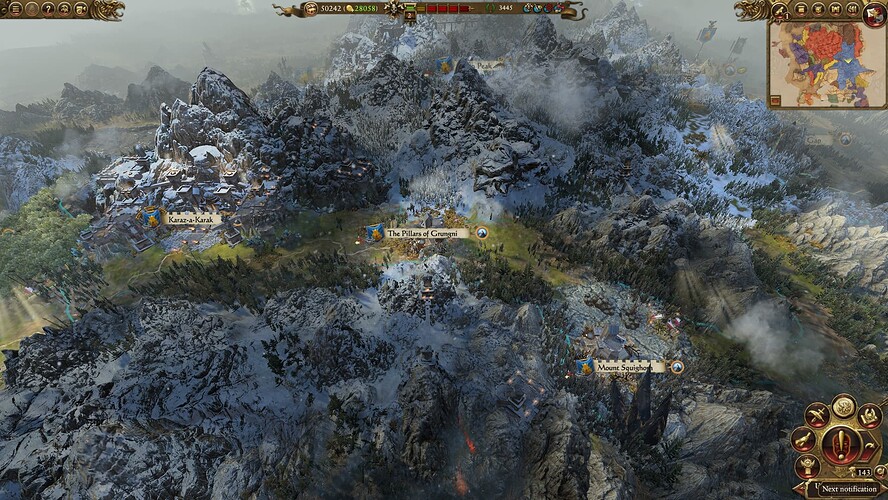 Here is the Silver Road in TW3: Immortal Empires (snipped image from the above YouTube video) 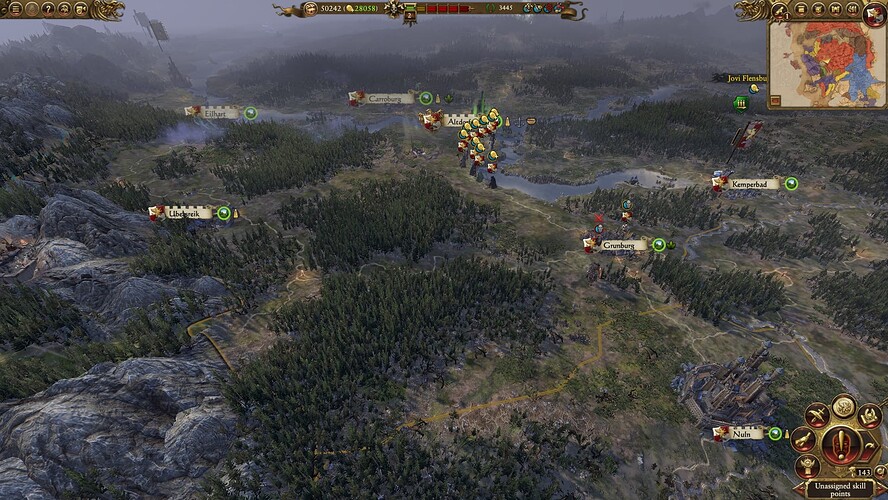 Again, from the YouTube video, Reikland in TW3: Immortal Empires 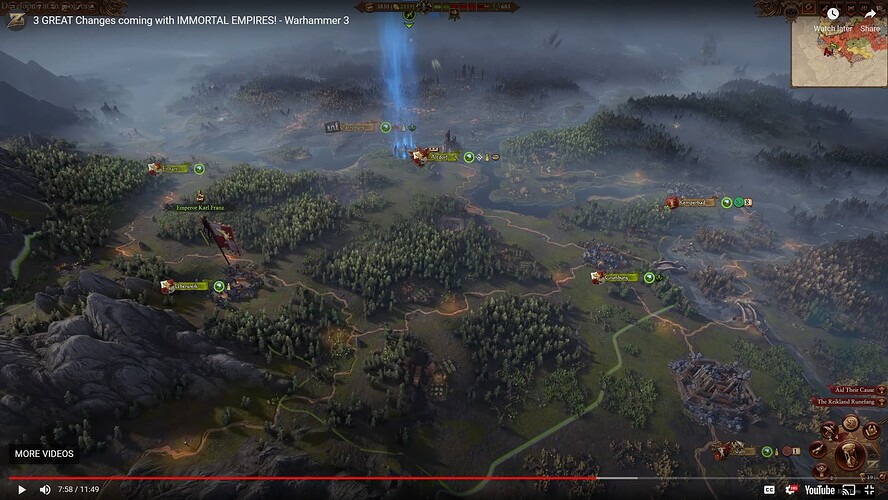 Thanks for both of these, it’s what I was going for with my compare yesterday.

The Reikland one in particular is a great example of improved readability.

Thanks for the detailed reply @Mike_Hernandez and for all the others who did the vids and stuff. I mean, I’m gonna buy this I’m sure. I was just hoping it would run better than it did when I tried it off of Gamepass. Maybe it’ll still run a bit better from Steam instead of the gamepass version. Mostly I just need to upgrade my rig.

Thanks for your feedback, it has been noted and I will file it appropriately.

But also you can’t be serious. JFC.

No need to be rude.

My brother, you are on Qt3.

I don’t think he meant in a rude way, he was just saying that if you don’t see one as a big improvement over the other than it might not be something you’ll care about.

Snark is the default tone of the internet but I don’t think it was being used here. :)

It’s just the difficulty of communicating over text without the benefit of body language or tone. Re-read what you wrote with a snotty/condescending tone and I think you’ll see why he interpreted it that way. :)

EDIT: Sorry for using too many emoticons. :) I really need to stop. :) Although I felt it was important my tone was conveyed correctly, given the context. :)

I don’t think he meant in a rude way, he was just saying that if you don’t see one as a big improvement over the other

Oh wait, the post was in fact about readability!
Never mind :P

I’m in the same boat. It sucks that the improvements cause such a performance hit. I was a bit annoyed at first, since the improvements are not necessarily graphics/fidelity but more nuanced, like coloring and just making the map more readable. However, I’ve come to really appreciate the changes after going back and revisiting TW2’s Mortal Empires. Being able to clearly identify chokepoints, roads, bridges etc. helps enormously. But I miss my 60 fps :(

Maybe it will come back? Any chance?

BTW did I offend you @Scotch_Lufkin ? I haven’t played War2 since it first came out, so I don’t remember anything. It was an honest question because everyone has their own style of what they like and what they find clear. I wasn’t trying to be snotty or funny. I was just unsure. Flummoxed to why the tone suddenly shifted here over a comparison screenshot.

Thanks for watching so I don’t have to!