So I got a bunch of roguelikes in the recent Steam autumn sale, and while they’re all pretty freaking great (like Vagante, which Scott Lufkin is enamored with, as am I really), the one that’s got my by the short and curlies is this amazing platformer called TowerClimb. 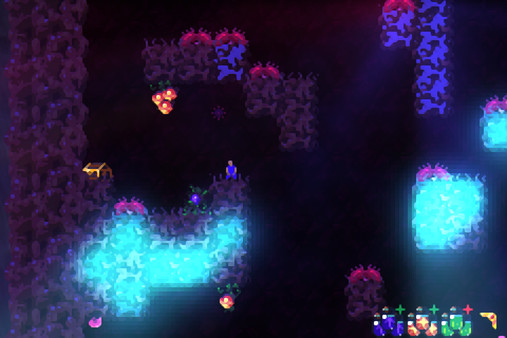 The game has retro pixel art with more advanced lighting, and looks wonderfully charming even though it’s a very deadly game. It took me several tries justto get through the tutorial, which apparently they only just added for n00bs like myself. ;) The game involves climbing to the top of a tower, room by room, and each randomly generated room has its own challenges. There might be rising lava, or rats that’ll wanna eat’cha on every ledge. However, the developers stress that each level is passable, you just have to plan ahead a bit, which means proper use of potions, jumping, climbing, throwing things and so on.

The game has three primary potions: A jump potion which allows you to double jump, an incindiary potion that acts like a grenade, and a teleportation potions. The “normal” game starts you off with a few of these, and you can buy more if you acquire enough berries and meet a witch in the level which will trade you berries for potions. Even with these potions, you’ll die a lot. Whether through falling, being eaten, blowing up or what have you. So far I’ve died in a myriad of different ways, but like Spelunky, I always feel the death is my fault, rather than the game being unfair.

The controls are tight as fuck, which they have to be given how precise you have to be at times. I’ve been playing with a gamepad, and have been having a lovely time. The game also has local co-op, which I can’t wait to try. Another high point is the soundtrack, which is just fantastic.

Here’s a decent video I found of someone playing it:

Overall, I can’t stop thinking about this game. Anyone else playing this one? It’s apparently been around forever but I’ve just found out about it. Thanks for letting me rave about it. :)

I bought this game when it was in beta ages ago. Just checked my inbox and the devs sent me a Steam key back in September! So I’ll be checking it out again shortly. I remember the beta being balls hard. Assuming you had really hard balls.

It’s still balls hard, but they’ve made it a tad easier for new players by allowing players at easy and normal difficulties to carry multiple potions, whereas at higher difficulties it’s still apparently one of each potion, which seems CRAZY to me.

Damn, this game is crying out for leaderboards so you can track your progress and stats against your friends. It’s exactly the kind of game that, like Spelunky, encourages you to play just one more game to beat that friend above you on the leaderboard. Right now it’s fun, but it’s a lost opportunity.

774 feet so far, which I’m sure it really quite pathetic. Brian, what’s the score to beat from you?

Hi Brian! I’m one of the devs, signed up here a few days ago when I saw you mention the game! Glad you’re enjoying it as much as you are :) 1000ft is less than like 5% through the game :P there’s a lot of tower to climb! One thing i can say without spoiling is that the game very much rewards perseverance, and we’ve designed it in a way that gets much more interesting as you go on playing. For this reason we sometimes get complaints the game seems “lacking” or “simple”, but they’re usually from players who couldn’t get very far or only played a short amount of time before making their judgement, without fully understanding the scale and design choices we made. It pains me when this happens because there is actually a ton of interesting stuff, but it’s meant to act as a large incentive to always getting a little bit further. The early areas are kind of simple, but this is really to habituate players to all the controls and little details they’ll need to tackle the every increasing difficulty. As indies we have the ability to take risks making games with this kind of structure, so keep in mind that the game doesn’t show all it’s cards to you at the beginning. We’ve designed it so you feel a great sense of accomplishment in your victories, rather than feeling like it’s dragging you through exposition. We wanted it to be an epic adventure, and when people finally beat the game they get pretty emotional!

Thank you so much for being a fan.

Hey Quazi, how are ya? Thanks for replying here and on my Steam review the other day, that was SO cool. You really have an amazing game here, so I’m trying to sing its praises to anyone who’ll listen. :)

Also, krok brings up a good point, leaderboards would kick ass in this, might there be any plans to implement them?

I’m going to look into adding stuff for achievements and possibly leader-boards (not sure how they’d work though because the game isn’t infinite/score based!) this winter break, might be difficult with our old engine though. Also edited my above post, didn’t expect a reply so fast :P !

Wishlisted this, it will be on my radar for the winter sale. ;)

Same here. I’ve been binging hard on Downwell lately, and think I’ve hit my limit (not enough variety in Normal mode to maintain interest after beating it, and Hard just kicks my ass). So I’m ready for the next great roguelike platformer.

Oh god, the variety of deaths and such I’ve seen only in a couple of hours has been fantastic. The first time I was in a room with rising lava – which includes really tense, fast moving music – was particularly memorable.

I’m going to look into adding stuff for achievements and possibly leader-boards (not sure how they’d work though because the game isn’t infinite/score based!) this winter break, might be difficult with our old engine though. Also edited my above post, didn’t expect a reply so fast :P !

What about having a leaderboard that shows the highest everyone has gotten that resets after a set period of time (daily? weekly?), and let folks view the board filtered by friends and the public, maybe.

What about having a leaderboard that shows the highest everyone has gotten that resets after a set period of time (daily? weekly?), and let folks view the board filtered by friends and the public, maybe.

Yea, I figured it’d only really make sense between friends, so I’ll look into that mostly! There are plans for a level editor as well, so i’m hoping i find a way to get steam features integrated with our engine.

Thanks for the info, Quazi. Yes, I hoped the game’s difficulty and experience curve would be something like Spelunky; you try and try and try again until you reach the next level or chapter, and suddenly you’re introduced to a whole new set of concepts and secrets, so it rewards skill and experience. One of the things that encouraged me to play Spelunky for over 100 hours (and I’m sure I’ll go back to it eventually) was that sense of competition; score, gold and level. In this case, you have the perfect stat in terms of height, but you could even do something with the death cards - if not a leaderboard rank (who has died the most) but definitely achievements (50 deaths by spikes! fallen over xxx feet before hitting the ground! etc)

The other thing that kept me coming back to Spelunky was the daily seeds; everyone plays the same random seed to see how high they can get. That’s a more comparable leaderboard challenge as well.

I kind of feel like every rogue-like needs the daily Spelunky challenge option - such a great idea, imo.

Quazi, thanks for weighing in. I love the idea of a game holding back on meaningful gameplay as a reward for progressing. That’s a brave and admirable approach considering how many games feel they have to put it all out there in the opening hour. Which is certainly the way to appeal to folks in a crowded market characterized by short attention spans! But it invariably dilutes the sense of discovery and reward. I’m really keen to try this now, which is unfortunate because I’m about to be away from my computer for a week.

The controls are tight as fuck

You sound like a dad trying to relate to his teenage children. :)

Well, Phil Dunphy is a hero of mine…

Hey Tom! I hope you like it when you get around to trying it. Some choices have been pretty polarizing, with people either loving or hating them. From difficulty to controls to exposition, we find some players absolutely love/understand what we’ve done and why, while some end up feeling frustrated or simply prefer different design. This was a game we designed to fit our tastes, rather than to have mass appeal. We’re generally fans of more difficult games where you have to work for your reward, and it really shows in the game itself. There’s lots of content locked behind difficulty, and it’s all meant to be built around the idea you’re trying to accomplish a really monumental impossible feat that no one has succeeded in. Actually succeeding is a feat you’re meant to be proud of, rather than simply the end of a game. There’s lots of optional content that we tons of time polishing and working on which will only really be seen by a very select few players who persevere. Regardless of if you love it or hate it, i’m interested to see what you think :)

I refunded this pretty quickly after buying it, in fact I was probably a little too quick on the refund trigger but with limited funds for games and a limited refund window I kind of have to be. My wired 360 controller didn’t seem to work in menus or in the game, keyboard controls were a pretty immediate turn off, at one point escape caused the game to quit immediately instead of prompting and then I refunded. I may check it out again sometime, but it definitely hit my first-impression-jankiness.

I also wish there was better/native controller support - I just can’t do platformers with a keyboard.