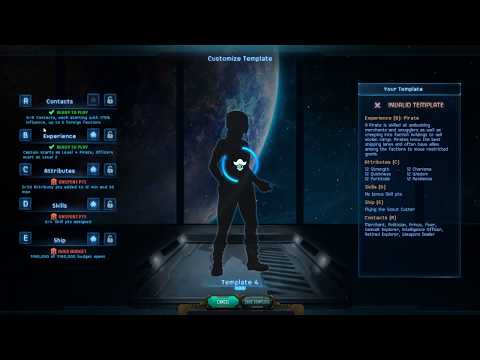 I think Star Traders is possibly the best supported / developed / improved game ever post-release, and also the game that has survived longest on my own “must play this again” list with a corresponding install.

Yet I have tried, and failed, a few times now, to get back into the game. I am faced with two challenges. One is that I have forgotten most things I knew from playing the game quite a lot soon after release. Two is that a heckofalot has changed and been added since!

Why do you say less crew? Too complicated? Or too much management?

There a mod for that! 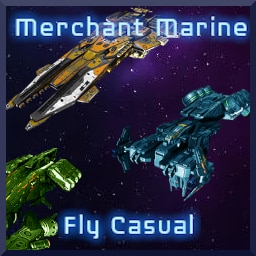 You probably know this, but you can automate crew leveling so you never even have to look at it.

Nope, not at all. As with many games like this, a lot of it comes down to difficulty level. If you’re not pushing against one of the harder difficulty levels or trying one of the more challenging set-ups, you can breeze through Star Traders without sweating the finer details like crew skills.

Do I need to keep a lot of outside notes or anything, or is it all well managed internally? (Sorry for the dumb questions). Watching your play through right now and still trying to catch on. The game is a bit heady right now but I hope to grasp enough to pass some time with it in a fun way.

Lost about six hours to this today. Okay, now we need to go over here to collect this person. okay, better land here for some fuel and R&R. Can I sell any of my crap here? No, don’t have the permits/it’s too restrictive. Grumble mutter grumble. Okay, next quadrant. Better pause for fuel. Oh, some people levelled. Okay, time to spy on this planet for the mission. Go right back? Nah, what’s closest? Etc.

I’m a little overwhelmed. A little confused when I need to land on planets for missions or which ones when there’s more than one, and what all I should be doing, does it get a little better the more you move around? Also it says I should hire another crew member but I’m not sure what to hire. I choose just the basic start scenario.

You don’t necessarily need to have a full crew - experience is distributed across the whole crew for most stuff so a smaller crew levels up faster. But look at the ship screen, at the blue bars in the lower right hand corner. If there’s something you’re under 100% on, you want to hire crew that does that skill. If you’re over 100% on all of them, you could try hiring someone who helps with the one you’re weakest on, or someone that helps with the type of activity you want to do (trading - merchant or smuggler, spying - spy, exploration - explorer, crew combat - soldier, pistoleer, shock trooper, etc). If you don’t know what that is yet, probably just don’t stress it.

Thank you for this! That helps a lot.

Wow that Merchant Marine mod is very fun. I just spend a pleasant few hours with it. I am still figuring out the right balance. With good crew 10+ level the tests are all easy. Maybe I need less officers, The intent of the mod is great - I cared way more about my 16 people than I ever cared about 40. I wonder how few I can get it down to ….

I fully committed and removed my crew compartment. I am flying with 10 officers only. Here they are:

I had picked their classes as I leveled up, back when I also had crew. If I re-started I would pick slightly differently. What to pick? Just look at what your ship needs. Here are my primary area percentages with these 10 officers: 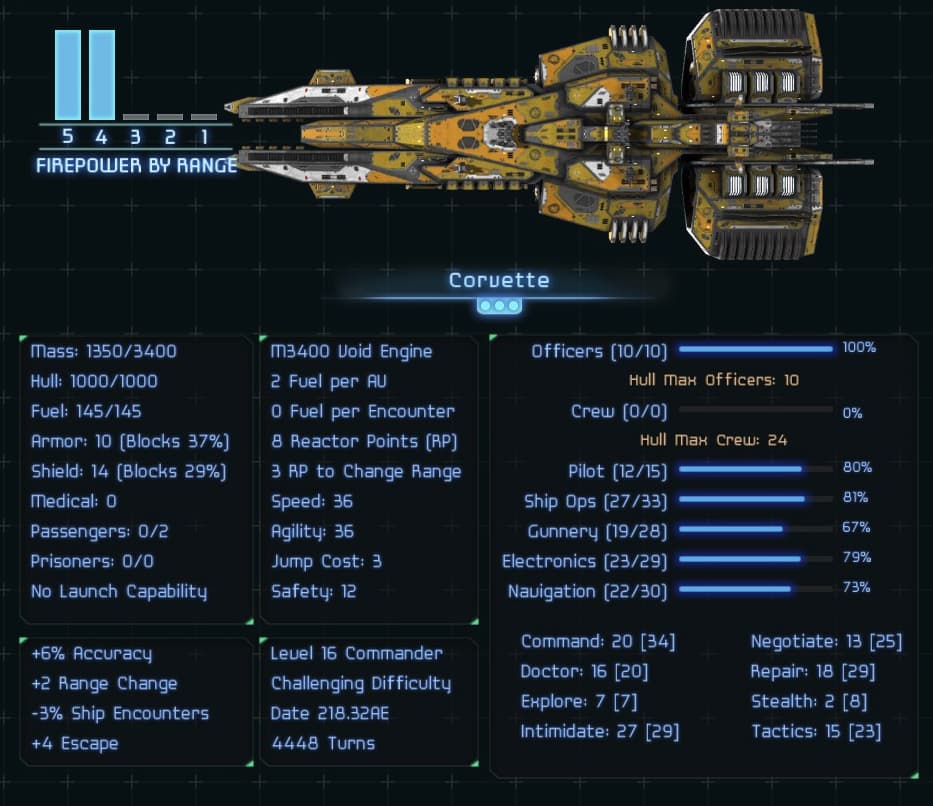 For example, I am still light on Gunnery after adding more weapons but not adding more gunners. So I just added Gunnery to Leetin Crass, who was originally a Mechanic, evolved to a Solider (where I still need her and her shotgun) and now also a new Gunner.

I followed the recommendation in the mod page and set up the custom commander like this, modified with the “FireFly” suggestion:

On your starting planet, hire crew for the skills you need, and promote them to officers. Fire everyone else so you only have 10 officers, then replace the Crew Compartment with another cheap component. The ship details should show Officers 10/10 and Crew 0/0, similar to the pic above.

I find this makes the frequent level choices more meaningful. Crew combat is more tense, since losing one of these fine people would stink. :-( And those random skill checks are scary since no-one is expendable.

Thanks @tomchick for mentioning this mod!

I wish I could get that on my iPad.