I did a test restart, moving to only 10 Officers on the first system. It works. I also increased difficulty to Demanding, but that is personal preference. This is how the classes were assigned, not with a master plan, but by reacting to what was needed most:

The Pilot, Navigator and Doctor remain focused on their primary class. Everyone else has to take a supporting role. Some of this sacrifices long term needs (like Commander) for short term needs (like Navigator).

At commander level 5, all of the areas are just over 50%: 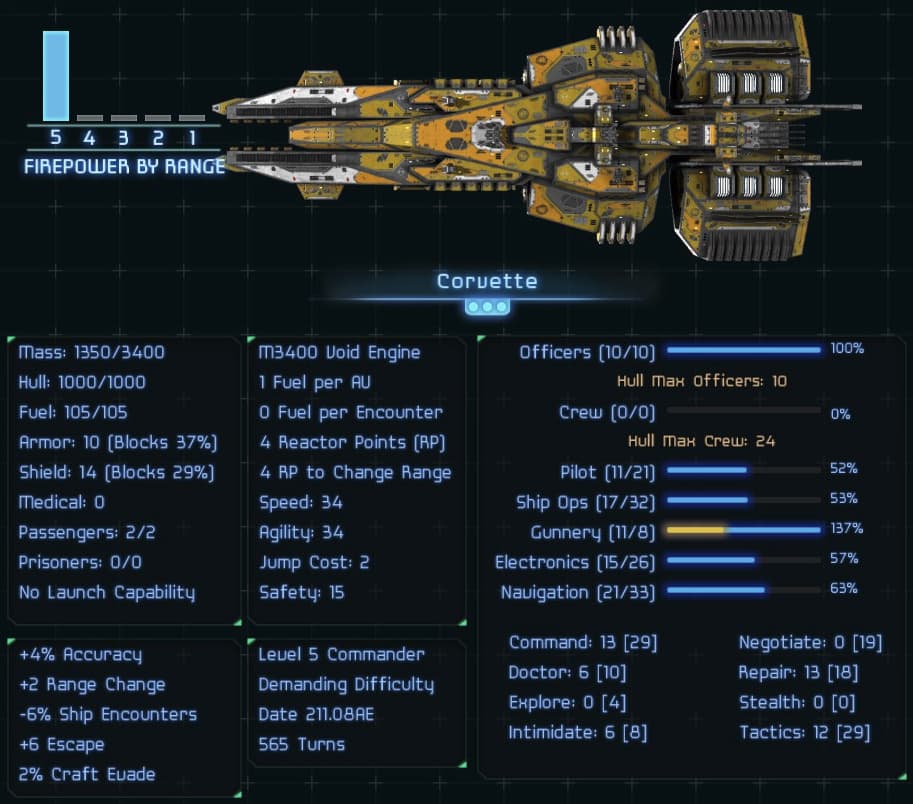 On round 1 at level 1 most were at 10%, so this was a big increase. :-) Gunnery is high because the ship currently has only 2 weapons, as I add more weapons the need will increase and the percentage will drop.

I will play this one to 10th level and see how it feels. The mod description was correct - you need to fly the plot missions for the easy XP and money!

I followed the recommendation in the mod page and set up the custom commander like this, modified with the “FireFly” suggestion:

On your starting planet, hire crew for the skills you need, and promote them to officers. Fire everyone else so you only have 10 officers, then replace the Crew Compartment with another cheap component. The ship details should show Officers 10/10 and Crew 0/0, similar to the pic above.

I find this makes the frequent level choices more meaningful. Crew combat is more tense, since losing one of these fine people would stink. :-( And those random skill checks are scary since no-one is expendable.

Thanks for spelling all this out. I’m trying this as well now.

I’m going back and forth between this and darkest dungeon. Anyone have a tip as to who I should be aligning with in the main story campaign? I don’t know anyone from anyone yet and it feels whichever faction I’m leaning towards is just a roll of the dice.

Thanks @tomchick for mentioning this mod!

And thanks right back at you for trying it and reporting back in detail. You’re getting me psyched to finally try it. Keep the reports coming!

Anyone have a tip as to who I should be aligning with in the main story campaign? I don’t know anyone from anyone yet and it feels whichever faction I’m leaning towards is just a roll of the dice.

An important thing to remember about Star Traders is that there are no wrong answers. Some right answers are less optimal than others, but as with any good sandbox design, you can choose however you like.

I was hoping it was that way. Many rpg’s have a hidden right way to go. I kind of want to defend (side with) the girl who’s being accused of blowing stuff up cause she’s cute and maybe innocent, but didn’t want to shoehorn myself into a corner.

I kind of want to defend (side with) the girl who’s being accused of blowing stuff up cause she’s cute and maybe innocent, but didn’t want to shoehorn myself into a corner.

Ah, you’re doing the main storyline. Yeah, you’ve got a ways to go before you have to worry about making any bad decisions. Keep in mind the main storyline is full of places you can just “step off” if you feel like going to do other things. In fact, if I recall correctly, most of the main storyline missions have absurdly long time limits.

Here are the Officers, with text details below. I added some titles and put them in uniforms for flavor. These are all of the starting Officers, plus some Crew I recruited on the first planet which I promoted. I have not lost a single Officer (thoughts on balance below).

Here are their classes and levels. The first listed is what they were originally, and the second class was taken later.

Here is the ship. All of the core attributes finally got to 100%+ around commander level 15. 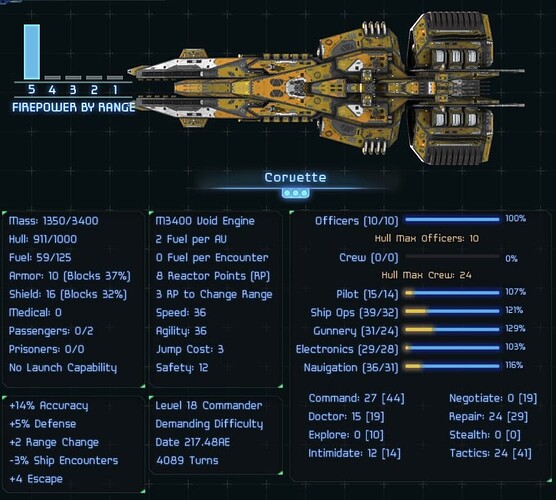 Its been fun, HOWEVER:

It seems too easy, even at Demanding. For the first few commander levels I would fail traveling skill checks, mostly because the pools were at aprox 10%. However, once they got above 50% I now pass 99% of them.

I think its due to two things:

I went looking for a fight. When I hover over my ship the pools say:

Can anyone compare these to a normal ship between commander level 15 to 20?

How hard should the game be? Anything else I can test?

Its a super fun mod. I like having few crew, I even had time to dress them up. :-) I expected Demanding to be pushing back a little harder by now.

In my new standard default game as an explorer it says I should hire someone to fill the one empty bed to fill on my ship. Any suggestions on what type of individual I should be hiring? I’m clueless.

Look at the percentage bars in the lower right hand of the ship details, see above. Hire whomever has the skills you need most (the lowest percentage).

The dev replied to some of my questions on the Trese discord:

For Merchant Marine, early game is rough, mid game is easier, and then mid-late + late is rough. Your comparison isn’t just to level, but actually total experience. It’s on total experience that things balance out. The starter ships are much more focused, which makes your early game defense much higher.

Just wait until the situation is reversed though, the AI also gets boosted small ship stats against you. The mod is balanced around having 6 crew in addition to the officers, so I’d encourage you to add them in. Crew combat for your setup is going to be very rough in the long term. You just won’t have the job ranks to be competitive. Most of the time you’ll still want to go with 4 combat officers (or at least 3), which hurts when it comes to ship dice pools. Getting 3 classes on your officers asap is important because it gives you an extra ~5 points per job for dice pools.

I tried to find ways of making Crew viable Crew Combatants, but I wasn’t able to come up with anything that would be functional. (e.g., enemy crew would ALSO get the bonus)

Have you ran into the Xeno yet? And how do you deal with the Pirates? Smaller size-ship pirates are even nastier than OG STF. The scaling also makes the Valencia Bounty Hunters absolutely lethal.

Anyway, I’m glad you are enjoying it and posting about it. In case it wasn’t apparent I’m the Merchant Marine mod developer. Andrew and Cory have done same great work letting us play with some of their toys.

This is going to be a really stupid question, but I’m having trouble seeing when I have a mission. I click the mission button and several options show up and I’m confused if one of them is saying I have that mission already or if it’s a different mission to select. I know it should be really cut and dry, but many times I think I’m doing a mission, and I click it, it instead says I need to finish a different mission.

Like talking to this guy I could have sworn I’d already accepted missions from him, yet it keeps asking if I want to accept a mission. 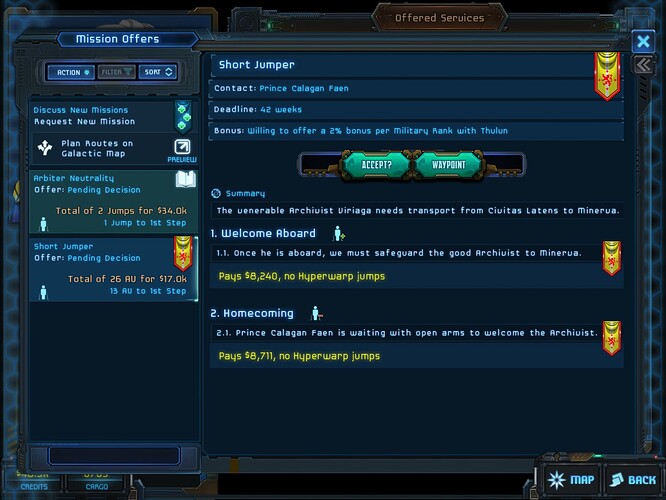 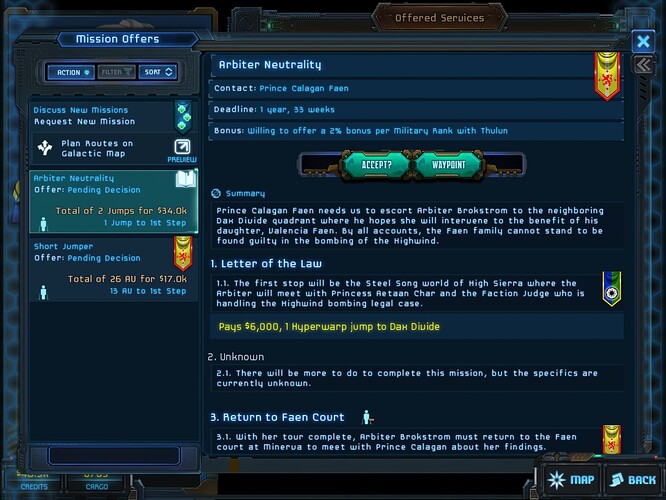 Yet when I’m out in space it looks like this, which means… I have a mission? Can I have more than one mission at a time? 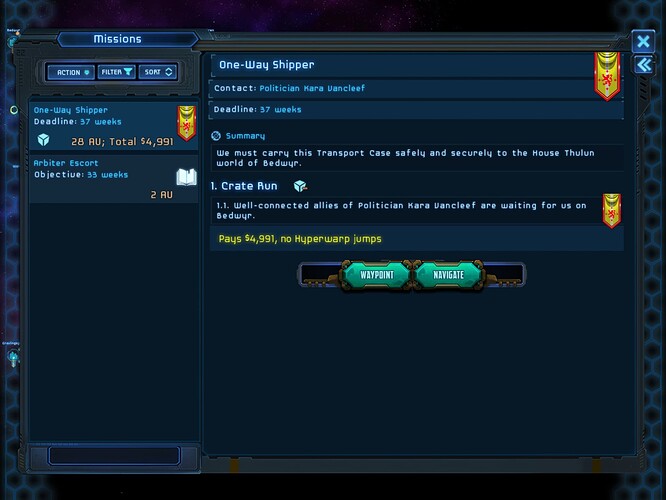 Yes, you can have a whole bunch of missions simultaneously. Each contact will let you take up to X missions from them at a time, which number is determined based on your effective rep with them (personal rep with the contact adjusted by your overall faction reputation). It doesn’t take much to be allowed 2 with a given contact, and I’ve seen 4 - it might go higher. You can also go to the Discuss New Missions tab on the contact’s mission offers screen and prompt them to offer you new missions, even if you’ve already taken all the concurrent missions they’ll let you have, not sure if there’s a limit on how much you can do that. You definitely won’t want to take every mission some contacts offer you. I thiiiink if it’s still on the mission offers screen you have not taken it.

The bottom screen. Does that show I have two active missions? I don’t now why I’m having such trouble wrapping my brain around these screens.

Isn’t strange that something so simple like a missions screen, can look to one brain so abstract even though I’m sure it’s not? I’m hoping it’s just cause I’m foggy from being sick. Otherwise I got dumb hehe.

I remember being a little confused by the mission UI too, for what it’s worth. :)

I hope you’re feeling better. You 've picked two of my favorite games to entertain yourself with – this one and Darkest Dungeon. Anyway, get well soon.

Yeah, I had trouble with it initially too. It just didn’t feel intuitive for a bit, and I would keep accidentally requesting a new mission.

Yes these two games are perfect for the hospital environment since I don’t have a laptop. I love my Switch, but when I’m really sick like this, getting my eyes to focus on such a small screen is too challenging - so the iPad is a good bridge.

Update from my time with the Merchant Marines mod - plus details for anyone interested in the general combat system.

Chatted with the dev for a while. The most important detail is the mod gives small engines a multiplier on Agility and Speed dice. The bonus is specific to three smaller engine types: mass 2400s engine x 2 (aprox +27 dice); mass 3400 engines x 1.5 (aprox +12 dice); and mass 5000 engines x 1.25 (aprox +5 dice). Larger engines are not modified.

Per the normal dice and combat pool rules, these are Strong dice, which will succeed 40% of the time. So a +12 dice bonus on a 3400 size engine would be +4.8 successes, on average.

You can see all of this in the ship combat screen when you hover over the ship. It will show your combat pools (eg Accuracy), and what they are made up of (eg Speed and Navigation), and what the totals are. You will NOT see the engine size modifier, its built into the engine Speed and Agility rating. When your 3400 size engine says 36 Speed and 36 Agility, that already includes the x 1.5 multiplier which brought it from 24 base +12 bonus = 36. 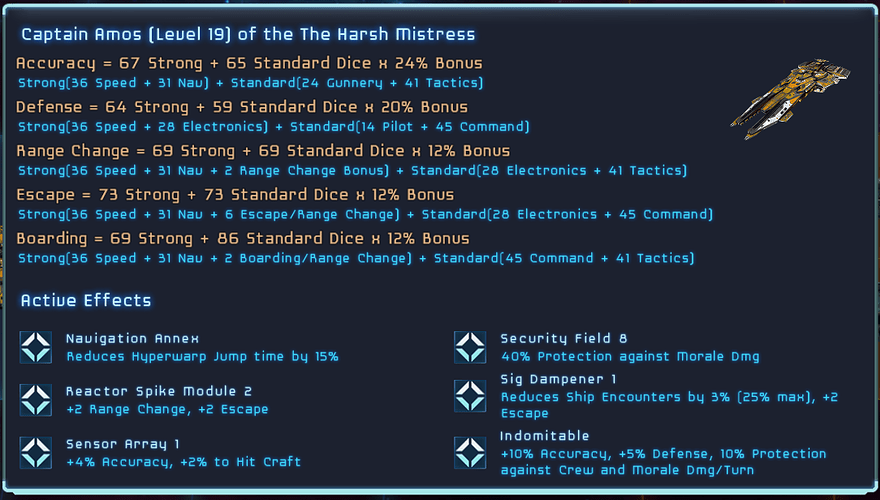 This does not scale with difficulty level. I play on Demanding (5/8) and the dev plays on Impossible (8/8). Some of that is why I found ship combat a little easy.

However, most of the reason I found it easy was because of my own Officer choices, and some lucky bonuses to their Tactics skills, plus the variability of enemy ships. Sure, there is a +12 bonus from the engine, but I also had a +17 bonus to Tactics from lucky Officer traits. When I was fighting enemies less than my level that means I was hitting a lot.

After commander level 20 its starting to even out. Sure I hit a lot, but I am also getting hit back. I think its going to keep getting harder.

So the result is I think the mod is balanced well.

My commander is up to level 23 now. I added a third class to most of my Officers. I stopped taking main quests, and am now taking random quests from other contacts.

I still prefer this “10 Officer” style of play. Let’s see how far I can get!