Unity of Command II - this time it's 3d

Better believe it! The announcement will go through “proper” PR channels as well, but here goes the blog version. The game is scheduled for release later this year (Q3 2019) and all of the rest you basically already know if … Continue reading →

That post links to a bunch of other dev diaries explaining the new features in more detail.

Link to the Steam store page.

I’ve been hearing and reading good stuff about the first one for millennia, so maybe I should get around to trying it in preparation for the sequel. That said, I’m not entirely sold on the units’ new 3D look. 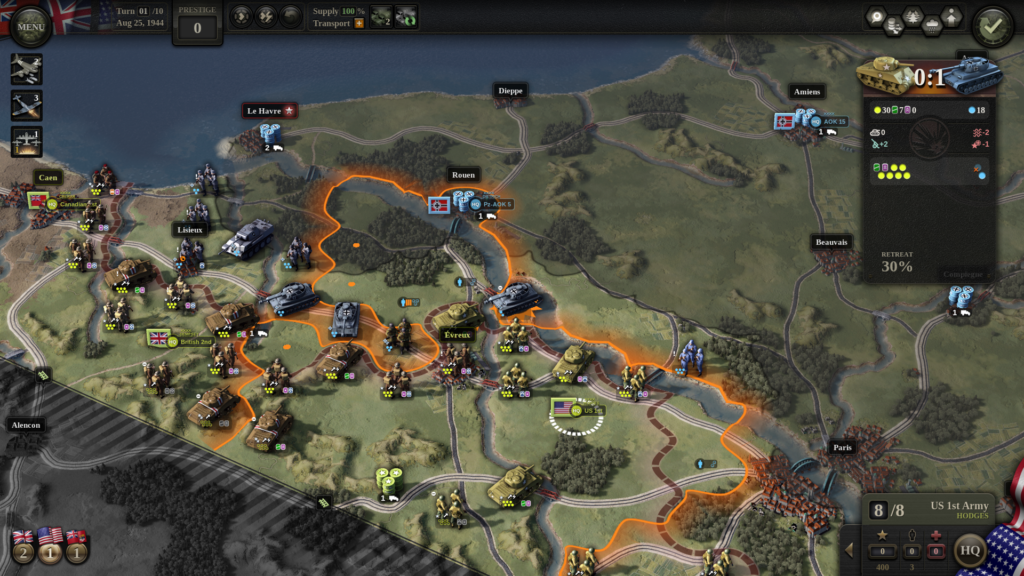 August 1944: after months of hard fighting, the Allies are finally out of Normandy. In front of them, the Wehrmacht has all but disintegrated, having stood its ground up until breaking point. Supply is now the biggest concern for the Allies. …...

Huh, hadn’t heard anything about this stragglers system. 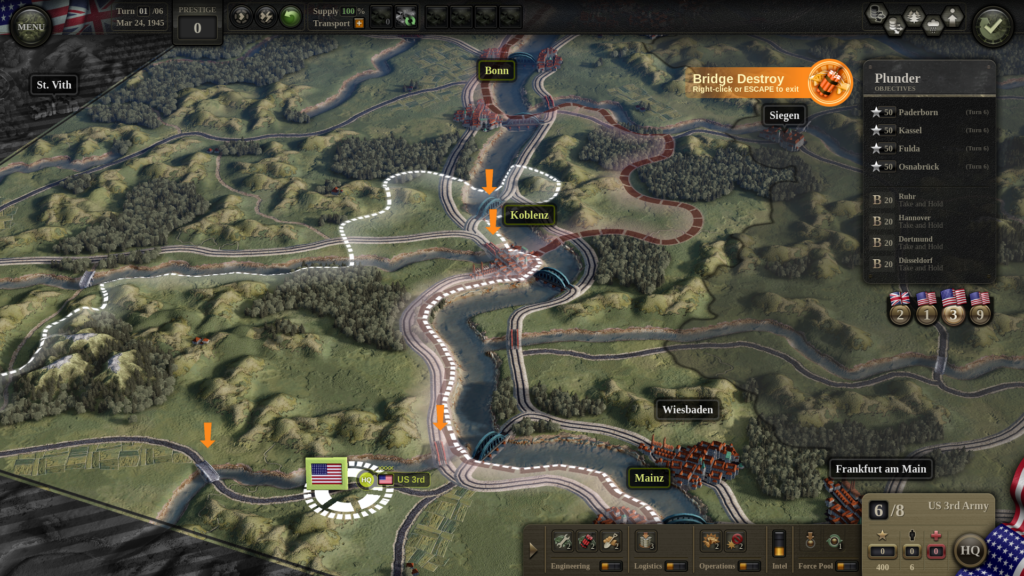 September 1944. Hitler’s armies are retreating in disorder after their defeat in the Normandy hedgerows. The Allies keep up the chase across France, but General George Patton’s 3rd US Army is beset by supply difficulties. The Germans finally manage...

That’s a cool mechanic I haven’t seen before.

Looks nice. I just hope they modify the seemingly obtuse supply line system. I wanted to like the first game so much but I really never understood how to increase supply range so about mid-mission I would be at the limit of my supply lines and unable to move forward. After 10 hours or so I gave up in frustration.

Uh? I found Unity of Command’s supply system the easiest to understand from any game trying to model it (of course, games with no supply modelling are easier to understand :P)…

Supply sources connect to railway hexes. From a connected railway hex (uninterrupted railway line to your supply source, every railway hex in the line under your control), supply extends out to non-railway hexes a given range (defined by the source) in Movement points (so no supply tracing over unbridged rivers, mountains, etc). To extend supply, extend railways by controlling the spaces the line occupies. That’s prety much it.

Length of the railway line does not matter. If a hex is connected to a supply source through controlled railways, supplies extend from there.

All strategy games must have cards.

Unity of Command II :: Gamescom Update - What’s in the Cards?

We are descending on the fair city of Cologne, Germany this week to attend Gamescom, the world's biggest gaming expo. Our chosen screenshot should be appropriate then, as one of the objectives for the Rhine crossings of March 1945 was indeed Cologne...

I didn’t even get a chance to read the link. I’m sure they’ve done a good job with it.

Unity of Command II now has a release date, and is taking applications for beta testers. The test is due to start October 21st. 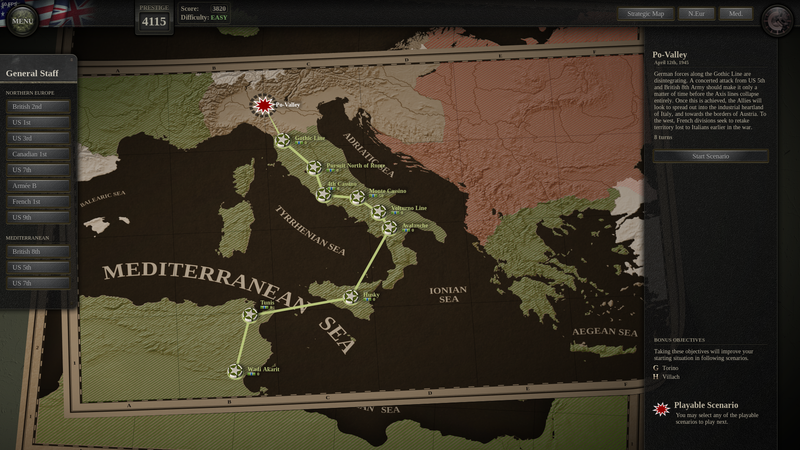 We’re starting the beta test for UoC II in ten days or so. If you don’t mind spoilers and have a high tolerance for bugs, please apply and help us make it an awesome wargame. The beta application is open … Continue reading →

Hey, remember that time when we were joking that Unity of Command 2 was never (probably) going to release? Well, jokes on us, because developer 2x2 Games has decided to go all Galaxy Brain on us by actually announcing a release date. Sort of.

I was in the beta for the first one. Application filed.

I was too. Or maybe a couple of the DLCs. I can’t remember.

Yep I signed up.

Release date is November 12. It looks like I’m still on the PR list for review codes. (I snorted a bit when the form letter addressed me as a journalist.)

Debating whether to play now while I have time or wait it out to play with you all.

Bring on the 12th of November I say, for what I have seen so far looks quite good.

Out today, anyone grabbing this ?

I’m getting this. Their first game and focus on design convinced me it’s a day 1 purchase.

The previews are glowing and the feature list has the the right ticks. I’ll report back when I have had a run on it.

I assume the NDA is no longer in effect.

Just for background, I game on a laptop with native resolution of 1920x1080. Because of this and poor eyesight, I set icons to 175% on my desktop. That said…

I was in the beta and excited to play the game, When I first fired it up, I noticed resolution was set to 900x600. I was anxious to start playing, so I jumped in anyway. Starting my first scenario, I noticed that the right hand side of the screen was cut off. That is the side with the “next turn button”. Quitting and restarting, I thought I’d try adjusting the resolution. I couldn’t make the change until I switched from full screen to windowed. At 1920x1080 the menu screen is so magnified as to make the buttons inaccessable… I had to ctrl-alt-del to get out, and emailed tech support. The best they could do was tell me what file to delete to restore the game to the 900x600 default - which still left the problem of the cut-off controls.

I waited and waited for each build, hoping that my problem would be resolved, but it never was. Last week the developers posted that they figured out that the problem was having icons set to 175%, and if I dropped it back down that was going to solve the problem. They were right and it did. But by last week there didn’t seem to be a point to getting into the beta a week from release. Anyway, the devs said it was an easy fix and they would take care of it.

As of yesterday’s build, nothing had changed. I was going to look at it today, but beta keys were revoked before I could do so.

The point of this long-winded story is caveat emptor.

I dont get any strange artifacts as described.

Because of this and poor eyesight, I set icons to 175% on my desktop

Although it seems that the 175% icons setting may have something to do with the scaling issue.

@Sonoftgb does bring up a good point, playing in window mode, the text is a bit small for my eyes. I can just make out the text. I have an Ultrawide 1440p monitor so I though I’ll change the UI scale to better let me see the text.

But the UI Scaling only affects the Gameplay elements like units, and cards. The Menus and Text in briefings retains the small sizes. It’ll be hard on the eyes if you guys are myopic like me.

Otherwise, the game is very polished and well done. I’m trying out the game systems. Looks like a keeper. You play the Allies in the Campaign. =)

Edit: After @Sonoftgb’s comments I tried adjusting the settings.

And now the text and menu as well as all UI elements becomes larger.

I do not have missing or truncated buttons. But I’m in fullscreen 3440x1440 display mode. I changed it to 1920x1080 window to test and am happy to report that at Windows 150% Text Magnification and Game UI Scale at 100%, it works as expected!