How do you use and build priests?
They seem like dead weight to me, as the cost of their ability usually forces me to keep them away from the fight.

That is my experience too, but the use Coldsteel describes is clearly a superior one i.e. they shine with the right mutators and focused (literally) on applying Aegis as many times as possible.

My 2 hunter, 2 javeliner, 2 tank team has massive damage output but I suspect I might find myelf in trouble when I need to go up against a much larger number of opponents due to lack of damage mitigation. I already find fights against groups with similar numbers of hunter equivalents pretty dicey.

Aegis is incredibly useful. I apply it at the start of battle to my troops without armor (berserker, bloodkinght) to prevent them from getting any early damage from poison, bleeding, etc. I have often used it to protect the objective of the battle (traders, weaponsmiths, etc.) so they don’t die before i can rescue them. I can use it if I need a character to run across thorns, hazardous areas without damage. Just a really useful ability.

For those not on the beta branch, including me, there was a huge update yesterday - new everything including monsters and quests.

One thing I love about it - When you rescue a character that is going to get added to your party you now get a choice of three classes to choose between instead of the previous no choice at all. This will really help party builds.

One thing I am trying to learn to love - One of the new monsters is a Porcupine Beast. Ranged poison. Lovely. Channeling inner peace and love for all creatures . . . .

Wish this was available on iPad, or there was a way I could stream my home games to my hospital room. Is it possible with some of the new services through NVidia?

No laptop, then?
I know there are tons of tools to remote control your desktop from Android (no doubt in the Apple realm as well), but those aren’t usually very good for gaming.

No sadly. Maybe I should think about one for the future? Or maybe the MS surface thing? Or a chrome book? Don’t know what would work with steam. Another game that would be perfect right now would be Dungeons of Dredmore.

If you’re looking for some good iPad games, three that come to mind immediately are Book of Demons, Tropico (I know how you love those city builders), and Star Traders: Frontiers. Maybe one of them will scratch that gaming itch?

Hit Play and I see a window flash open and then immediately disappear.
edit- Nevermind, known issue with Win10. Resolved by browse Urtuk’s local folder, find the file “urtuk.exe” and right click on that file -> “Properties” -> “Compatibility” -> and check the box “Run this program in compatibility mode for: Window 8”.

There’s some very exciting news in the latest dev update.

The second big task for us has been the design, implementation and testing of a new campaign mode: Conquest.

The Conquest campaign will play completely differently from the default Adventure campaign.
Your goal will be to attack and capture sites in one huge world map comprised of fortresses, camps, mines, villages and so on.

You’ll be able to field up to 12 combatants in battle, as opposed to only 6 in the default mode. 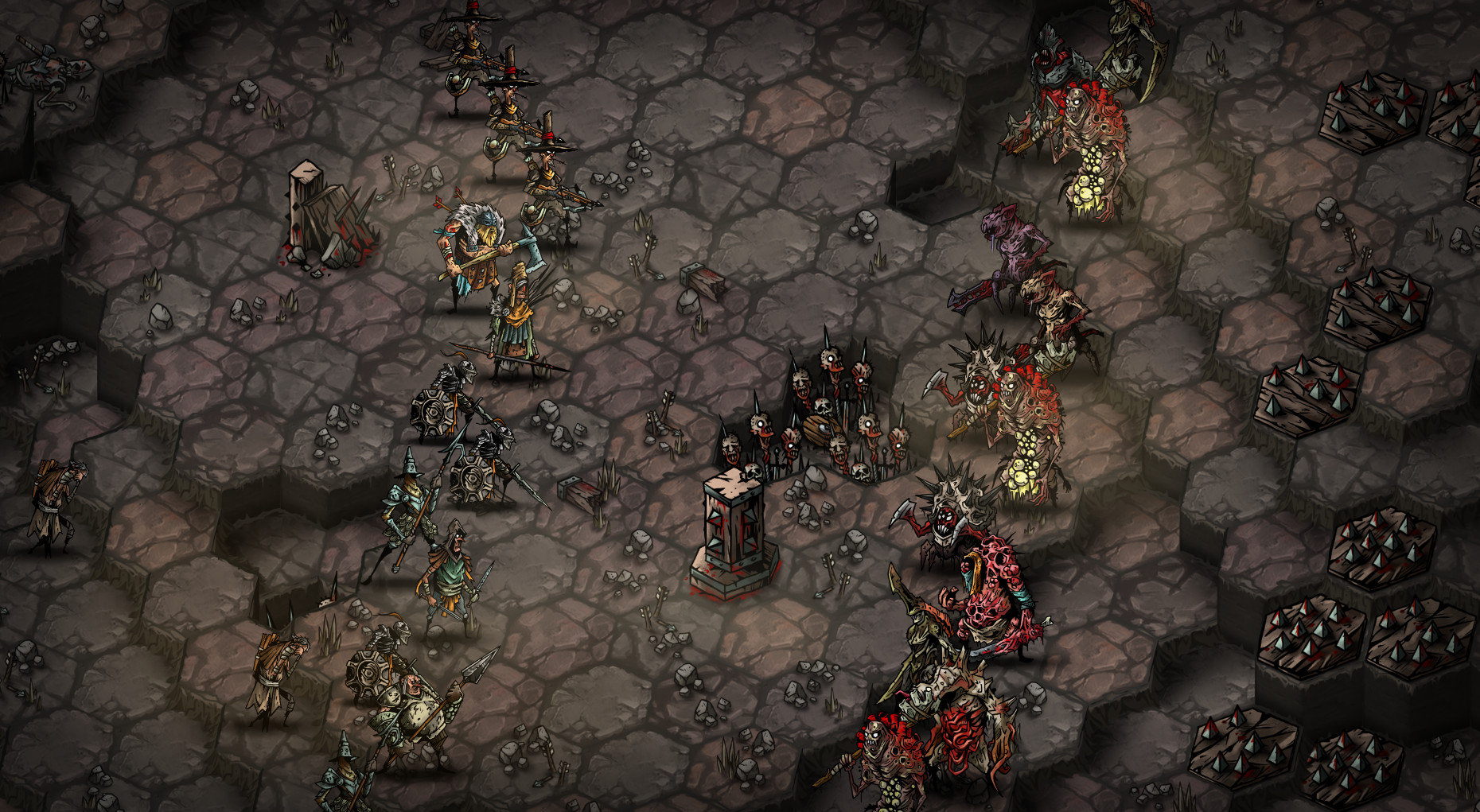 Tactical decisions will grow more complex as the battlefields are larger and you’ll face many more enemies. Formations, frontline soldiers, archers and possibly even siege weapons will have to be considered! Furthermore, you’ll have the option to garrison some of your units in world map nodes to secure different areas against roving hostiles.

Your enemies will have the same goal – they will try to capture nodes, increase their income, and hire new soldiers to fight for them. There will be more factions in the world map, and each faction can declare war on its neighbours, just like the player!

There will also be a new resource to gather, metal, which will be used to craft new weapons and armour. You’ll be able to free oppressed villagers and enlist them to fight for you (in which case you can choose their class and gear), or to become a blacksmith or miner. Or you can assign them to manage a fortress and raise its income.

As you can see, Conquest is much more focused on the strategic layer; you’ll have to plan long term to succeed in this much more complex campaign. We plan to publish a playable build of this new mode in our beta branch soon, hopefully by the end of next week. From there we will gather feedback and suggestions from our beta testers to finish the work as soon as possible, maybe even before final release!

Discover all of the cool events, news, and activities happening in your games in one place with the new Steam News Hub ! Whether you're at work, on the bus, or playing at home, you can now browse a personalized hub to easily find the...

Add in fog and it sounds like a full-fledged 4x

Yeah, this sounds very interesting. How it turns out depends upon this, I think:

Your enemies will have the same goal – they will try to capture nodes, increase their income, and hire new soldiers to fight for them.

So many good sounding games run aground when trying to have AI opponents play the same game you are. Either the game has to be kept very simple, so that the AI can compete, or the AI has to cheat (usually in really annoying ways) or the AI simply plays poorly.

But I am totally rooting for them to nail it here.

Are there any battle maps in this game with buildings/castles/etc.? It was something I found lacking in Battle Brothers.

Too much Desolation for buildings/castles/etc. Actually, I don’t remember any from playing it a month or two ago. They may have since added some.

Are there any battle maps in this game with buildings/castles/etc.? It was something I found lacking in Battle Brothers.

The answer is depending on how much you squint. Technically, no. In practice, fortresses and settlements have a different topography (though while retaining the same art). For example, a fortress might only have a couple of approaches leading to flatter areas several notches above in height from where you started, giving the defenders an advantage.

I enjoyed the tactical battles, but kind of annoyed with the strategic map. At some point it felt like a whack-a-mole game with my villages being taken over on the other side of the map and having to go and re-liberate them.

So what did we add during Early Access?
In a nutshell:

But the journey is far from over!
We have a big plans for the future content for Urtuk. We’re already working on:

It’s bizarre, there are zero reviews out there.

I don’t have it. I just saw by pure chance the game was out, and remembered there was a thread here.