Use the tin and copper to make bronze in your forge. Then start making some of the stuff that unlocking bronze unlocks, and you should be busy for a while!

but I’m not sure what to do next.

2 things generally. 1. Build everything available, especially tool type things and upgrades, as they can lead to unlocks. 2. Explore. Generally the hunt for the new resources you need, to build the new things you can, pushes you out and along the path.

It’s okay, you are a viking in training!

I think for bonemass, the best strategy is to get a stack or two of frost arrows (the only arrows that really hurt him). Then build a tree fort that is high enough where he can’t hit it. Then make a hole in the floor of the fort and then when he walks under it trying to get you, just shoot him with frost arrows. I saw this on a video, and have not tried it myself.

I basically have not tried it because I got bored of the game play loop which is basically this:

Sure there is exploration and whatnot, but mainly you are doing the same exact thing over and over. The only difference is your gear level. I just got bored of it knowing once I beat bonemass, Ill just start the loop over again with a new resource, and once I do that, I have to look forward to starting the same loop yet again, etc…

This game desperately needs diversity of tactics to allow a lot of player creativity in character builds and on how to solve problems.

I really wish that the player had access to the magic system the game has. Fire, shamans cast heal and poison, those plains mobs cast a shield and projectile…it would be great not only in terms of solo play, but team play. You could easily expand this game, so that multiplayer wasn’t just everyone zerging a boss until it died. 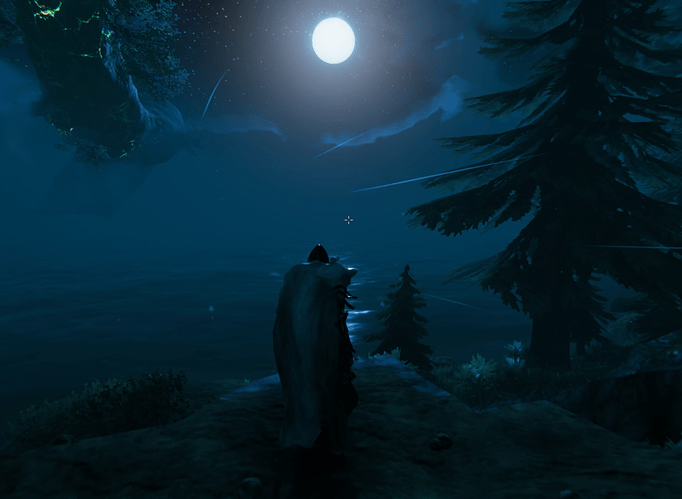 Well, with the 60-80 million of revenue they’ve made already, they can add to their hearts content!

I think it can be hard to remember that this is a brand new EA game from a small, new, indie dev team lol. It’s already so polished and will give a ton of fun for the money. But they’re still going to add a lot of stuff

Yes, this is Early Access, has a 5 man dev team, and just experienced a massively overwhelming first couple of weeks response to release. Right now the devs have stated they’re going to be busy fixing bugs reported by the players on a scale they never could have tested themselves, and once that is complete they have laid out a Road map of new content throughout 2021. I have a feeling this game will end up like Minecraft and No Man’s Sky, receiving constant releases of new content and improvements for years to come.

Had some time last night to collect more resources and craft a bow, a spear and some arrows. Man is the spear nice for killing boar quickly and efficiently. I did a ton of sneaking around and took down several deer with the bow until I ran out of arrows. Went back to my longhouse and crafted more arrows and a leather armor tunic, then got sidetracked by how ugly my fire pit was, so I demolished the rear of the longhouse and built a bump out with two story chimney, using half walls and 2m poles on the second story with a 45 degree thatched roof to create a decent ventilation shaft for the fire pit. It’s the best look I can manage in the absence of stone crafting and a hearth. Built a second chest as well as my loot and materials were becoming too much to manage with one chest.

Tonight I hope to hunt enough deer to finish my leather armor set, plus some more boar to upgrade my spear and craft a tower shield. Once I have those built and enough spare resources banked, I will summon the first Forsaken and see how I fare. 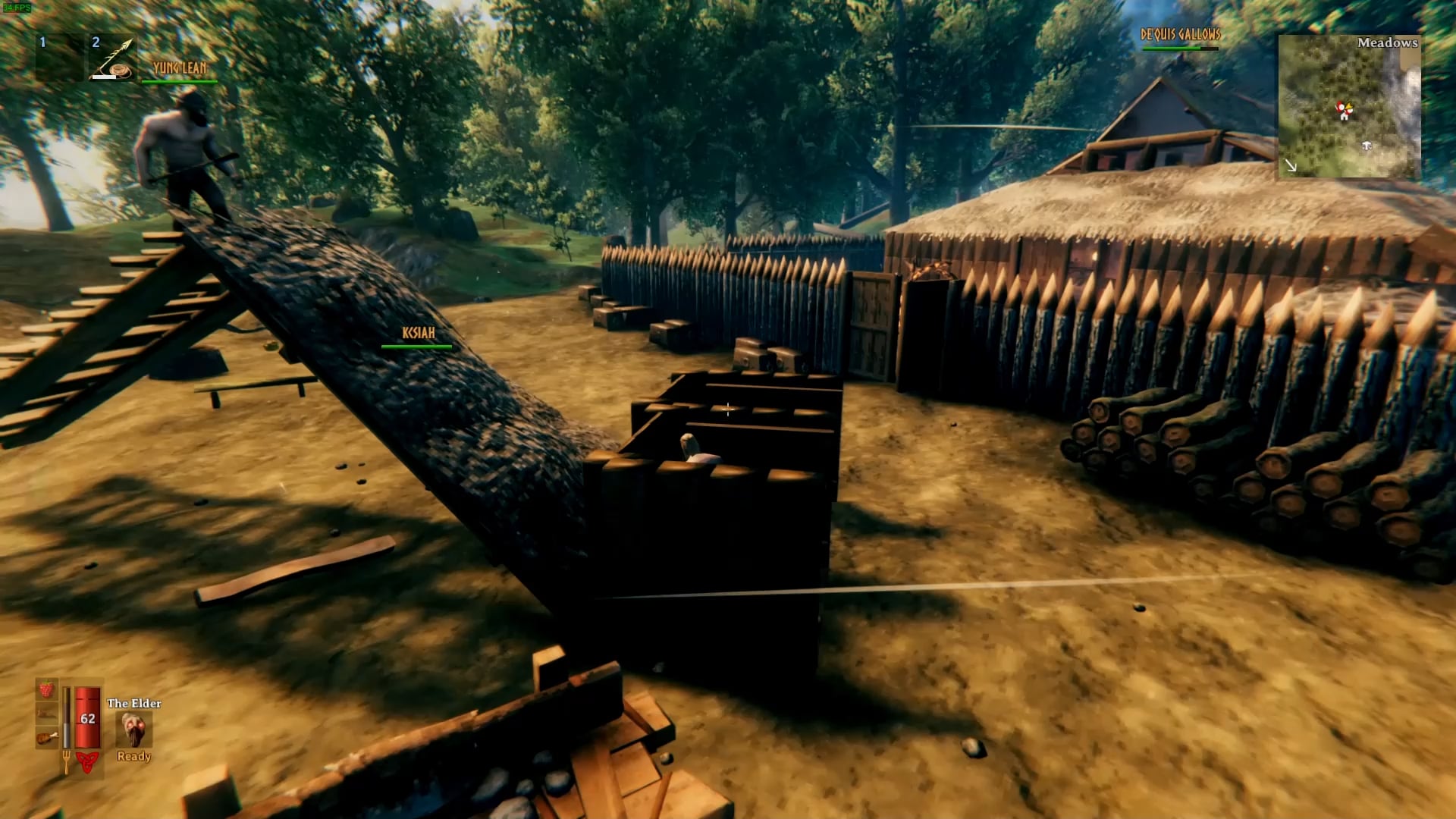 Working on a new house!!! Found an amazing location with a series of small islands, I plan on making a huge compound, this is the first building. 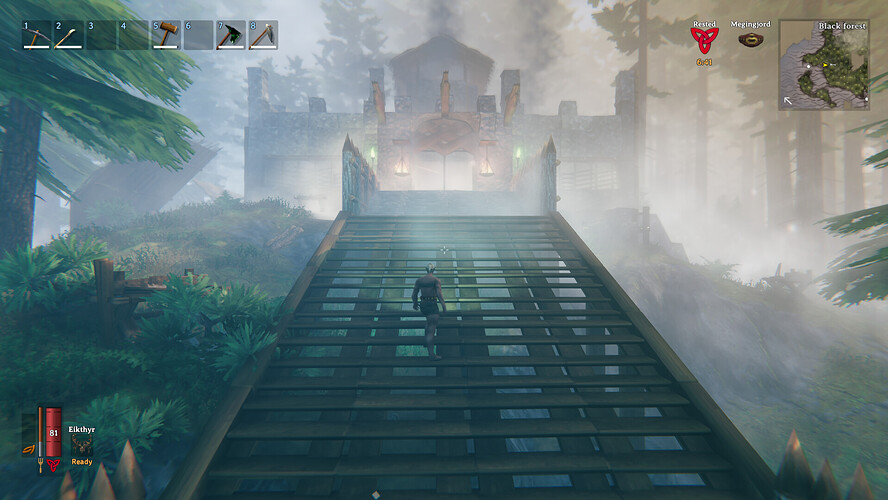 I have been, been stuck in building mode, but it would be fun to do some multiplayer.

I’ll try and jump on the server next time I play. I have been soloing, but have beaten the first boss and feel like I have a decent enough grasp on it to not embarrass myself.

This game is next up in my queue to dive into. I’m just thoroughly obsessed with Nioh 2 at the moment but once I’m finished with that I plan to be playing online.

Finished my leather armor set (incl. helmet), made my wooden tower shield and upgraded my flint spear to tier 2. Threw myself a feast to pump endurance to max and lit out for Eikthyr’s grove. Fighting him at night was extra cool since his main attacks are lightning based and made for quite the show in the dark. Dodging, weaving and a lot of blocking with the tower shield in between pokes from my spear was all it took to win the fight handily (lost maybe 30 stamina when I mistimed a couple of blocks). In the end I proved to be more metal than Eikthyr. SKOL! 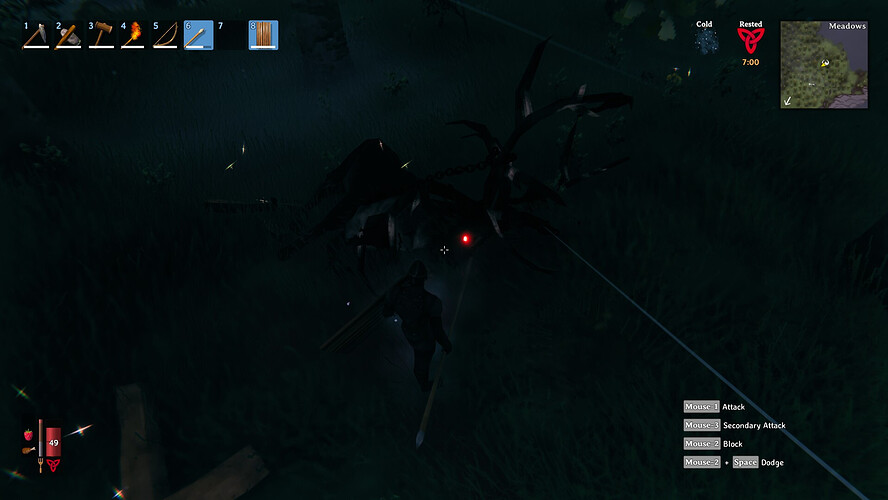 Collected my spoils, hung Eik’s head on the hook back at the runestone circle, basked in the glow of my new ability, and headed back to the longhouse to repair, rest and make my first pickaxe. Tonight I will try to find the boundaries of the Black Forest, and a spot nearby to build a new home for myself. This is fun!

Nice. That guy can be a little tricky at first

This game depresses no end sometimes. I died in the swamp, its a looooooong way from my spawn point. Many hours later, I arrive back to watch Draugr smashing my ship to pieces. I disembark from my raft, collect my stuff from my corpse. Turned around and its spawned skeletons who destroy my raft. Then some blobs appear, poison me and I’m dead again. I’ve yet to decide if I have the will to continue.

This game depresses no end sometimes. I died in the swamp, its a looooooong way from my spawn point.

I make temp beds whenever I am at all far from home. Resetting your spawn point is very handy, and it takes very little to get a shelter/bed going. For Swamp and above I’d recommend a portal as well, you’ll probably have to repair pretty often.

My new eatery is almost open for business on my island/vacation complex! 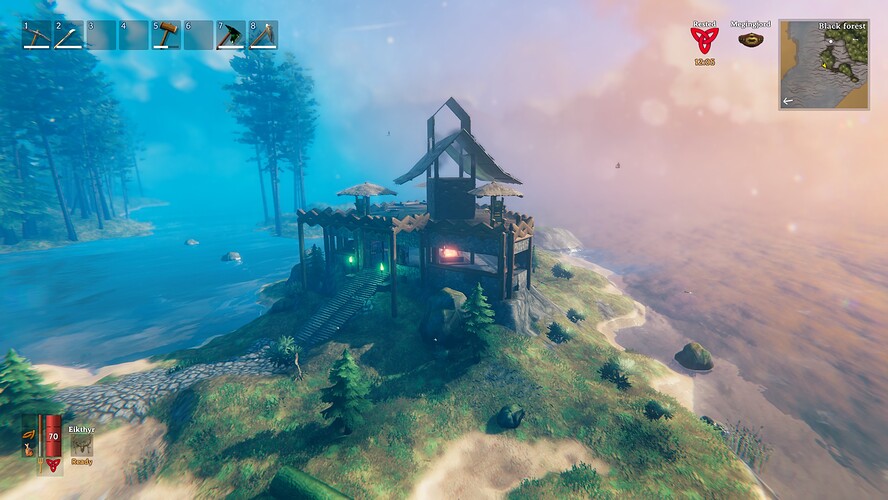 Ha! VERY nice! I like the little tiki huts you’ve constructed on the veranda.

I’m hoping to find a similar spot (small peninsula for easier defense) for my next home. Did you have to build up the terrain (if so how?) to get that elevation or was it natural? I figure anything built near water will need to be much higher than sea level to avoid becoming flooded during storms.