I’d like a game where I play a vampire hunter instead of a vampire but that’s just me :)

I’ll always support a delayed release if it leads to a better experience. The first Bloodlines game had so many little bugs that a lot of people missed it or weren’t able to play through it. But man…it’s one of my personal favorites, so I’m definitely looking forward to this sequel. It’s one of my most-desired games that I never thought would actually happen, so I was super excited by the announcement.

I pray to all gaming gods that they won’t fuck it up. Presence of Mitsoda and Schaffer on the team gives me hope.

This x100. They both got burned badly on the first one, can’t imagine they’d make the same mistake twice.

Ok that was a weird trailer. 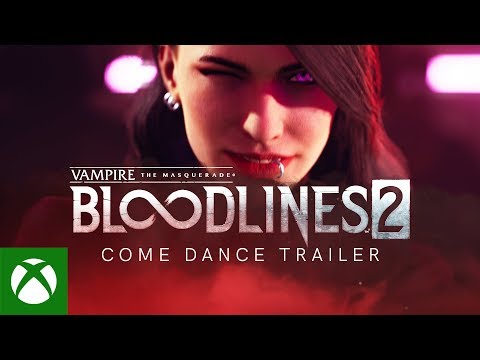 Still my most anticipated game…right after Cyberpunk. Nice trailer. Looking forward to my first Malk run of first Bloodlines before B2 ships.

Delayed until 2021. Also, fuck this picture of text bullshit.

Today we have an important announcement in regards to the release date of Bloodlines 2. 🦇 https://t.co/M3xR5qOOpN 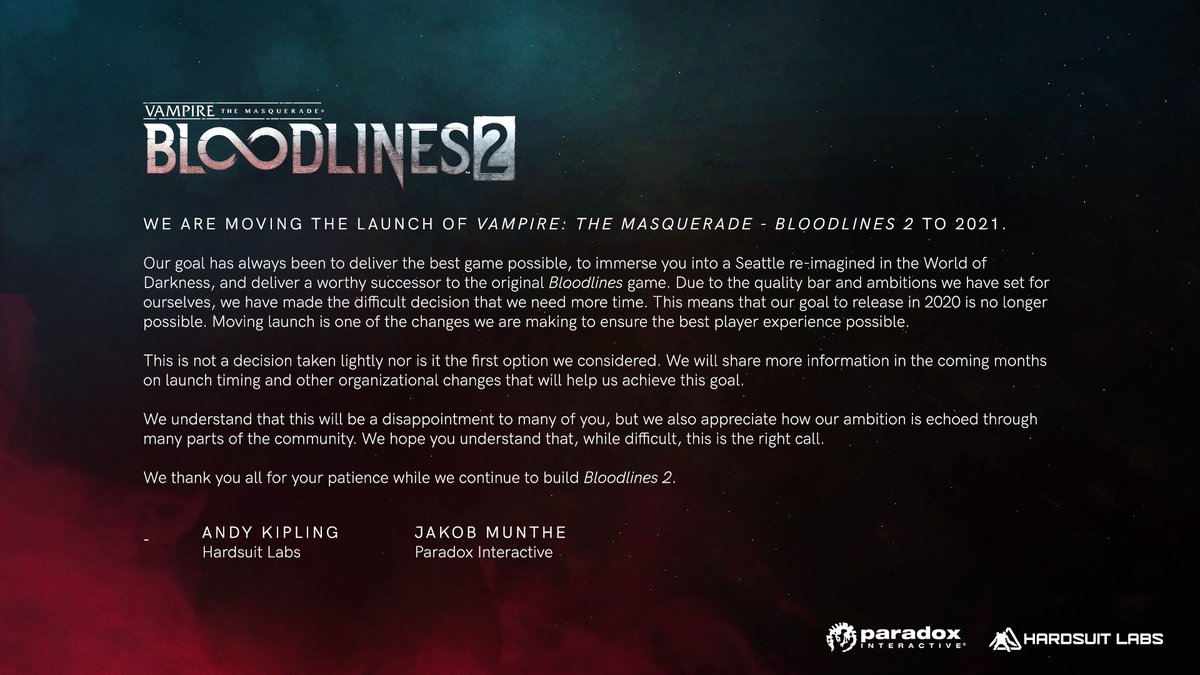 Shocking news. Why are these companies always so optimistic. Even if there was no covid, there is no way they would have been able to hit Q1 2020. Now it might come Q1 2021 and possibly later. Techland and CDP also aimed Q1 2020…these companies need to start announcing dates only when the games are finished content-wise and in debugging stage.

Is that because you don’t give a fuck about this title or because you are jaded old wizard who has seen the mountains grow and crumble?

I for one am fine with the delay for the latter reason. Also cyberpunk. And DCS hind.

Delay it as long as they need to ensure it is a success. #1 shouldn’t have failed the way it did, it’s a masterpiece that I thoroughly enjoyed numerous times.

This is why I come to Qt3, for the amazingly deep and engaging discussions.

Delay it as long as they need to ensure it is a success. #1 shouldn’t have failed the way it did, it’s a masterpiece that I thoroughly enjoyed numerous times.

Absolutely. I just find it weird how these companies can misjudge their own progress so badly.

Yeah, this seemed like a completely useless and unnecessary post to me. Sometimes I wonder what is going on around here.

All it takes is one major mechanic that turns out to be not fun and you’re faced with pushing back the release by at least months or shipping something that sucks in at least some facet. The problem isn’t that their estimates are bad - non-sequel game estimates are impossible - it’s that they should not be sharing them until they’re at least at feature complete and thus reasonably sure there aren’t going to be major design changes necessary.

Also, I recommend breathing deeply and remembering just how extraordinary and unprecedented our current situation is.

it’s that they should not be sharing them until they’re at least at feature complete and thus reasonably sure there aren’t going to be major design changes necessary.

Yes, that is what I said (although I was harsher and said they should only announce dates when content complete - not feature complete). Bethesda did this well with Fallout 4. Meantime CDP is delaying every game twice over its stated date.

People not talking to developers. UX mocks up a prototype and shows it to marketing, and before you know it they are saying its coming in a few months and developers have not written a single line of code. Or management putting too much faith in the guessed estimates developers are forced to come up with at the beginning with very little information.

I am glad for the delay. Let them have the time to get it right, while I’ll be busy with Cyberpunk and Valhalla for this year.

The thing is… i think they need to move Vampire mythology into the modern world. Right now World of Darkness seems stuck in peeling green paint urban decay on the edge of gentrification, with a 20-something lifestyle of strange, one-dimensional urban characters, endless nocturnal parties, and the vaguest sense of how vampires can hide in plain sight.

But we have cell phone cameras, commercial video cameras, we have a new world and a new sort of globalization. It just seems so… 90s now. I think vampire myth can be interesting, especially with the hiding in plain sight thing, but that takes more than handwaving now. It just seems so much more interesting to move the vampire into a modern setting.

Imagine Twitch vampires or social media vampires or “influencer” vampires, vampire start up execs for biotech companies (young blood injections?), vampire stock traders or programmers, ect. Not just gloomy black eye shadow Nine Inch Nails dudes from the 90s lurking in the back alley of some rave in the rain.