Vault of the Void (out of EA)

Vault of the Void is built on the idea of providing a low RNG experience, throwing as much control into the players hands as possible. Card Rewards are public knowledge, and you can preview which enemies you’ll be fighting before an encounter, with a chance to tailor your deck to suit! No Events are random, you know exactly where you’re stepping with each path taken.

You’ll build your deck as you go, a CCG experience where you can always modify your deck . Swapping in and out cards before certain encounters will always help improve your odds and allows you to adapt to monster strategies.

Version 1.0 of this deck builder is out now and on sale for 20% off. It looks like a lot of fun and has gotten good reviews. I loved StS and Monster Train and this looks like it may be as good or better. I particularly like reducing RNG and giving players more agency. Replay value looks good. Looks like my kind of game.

Anyone play this in EA? Any impressions?

I think I posted about it in the thread for the genre. I played quite a bit of it and like it. will revisit at some point

I’ve got a few hours in the game under my belt now. I finished the tutorial floor and then started a run on normal and I’m on the second floor now. I’m playing the starting rogue class that’s the only one that’s initially unlocked.

This is one of the best and most fun card games I’ve played. The UI and graphics are quite nice. It even has a large fonts mode and UI scaling. Overall, It’s hard to believe this was all done by a single person, even if he is a professional graphics designer.

The game mechanics are quite interesting. You pick a route through each floor like Slay the Spire and others, but you get to see in advance exactly what cards and rewards each battle will give you. That allows you to pick the path through the floor that allows you to build the deck you want. Speaking of the deck, you get to change it on the fly and swap out whatever cards you want in between battles.

Battles are interesting as well. You don’t defend on your turn but instead on the turn after the enemies play their cards. You can purge cards each turn for energy to play cards and you can purge as many as you’d like. You can keep a potion in your belt pouch to play at any point in a battle and/or brew one in advance that gives a battle long buff.

You can create some crazy effects by combining some of the effects on different cards like “trigger” and “Swift”. I combined them last night in a way that gave me 15 damage cards in my hand to play that cost 1 energy each. I had only 1 energy left but still managed to play them all and kill the boss. That’s because the card I chose for the effect was one that also had a “draw one card” effect attached to it. Because you can purge as many cards as you’d like, I’d play the attack card and then purge the card that got drawn as a result for 1 energy. Rinse and repeat. It was pretty awesome.

The game also has spells and artifacts that add modifiers or enhance other cards in some way. In addition there are rune stones you can socket into your cards that add effects. As a total package I think it’s a winner and I can’t wait to play some more. It also looks like the dev also wants to add some new classes and other stuff to the game.

That sounds super awesome, and it’s pretty cheap, too. I guess I’ll have to buy it, won’t I?

This looks great, thanks @Coldsteel for the link and impressions!

I’m really liking this. The hand management aspects in particular are very well designed. I picked it up in the Humble Deckbuilder bundle a couple months ago but didn’t play until the 1.0 launch.

My first two runs were wins, 5-6 hours each, with both decks of the first character and the cheapest challenge coin on the latter (Blade deck, which I actually played first, barely beat the final boss). The second run (Bleed deck) was a stomp. I had a lot of draw power at the end (artifact and draw poition for +3/turn total, some Expels, and a couple 2 draw/discard cards) and got the card with “Clot 2: 1 Energy, Swift” so I could combo into huge resources, but I couldn’t get another purple void stone to overcharge my energy cap off the combo so I never used it. I also got a spell to leverage the Affliction cards the Vault sticks you with into a huge Rage bonus (+% damage), and 52 souls (+1 per fight from an artifact) which took around half the HP off. Big overkill, and I took no damage from the guardians or Vault, but it was satisfying.

I’m quite impressed with the encounter and enemy designs too. For example, there are some fights that will hurt you for excessive drawing or deck slimming (your deck MUST have 20, but some cards will remove themselves or others), so maybe you want to swap out those cards or purge them for energy. It’s great that the game makes you reconsider what is frequently a dominant deckbuilding tactic.

Nice wins! I barely lost to the final boss in my first run last night. I went into the fight with only half health from the two guardian fights before the boss. I probably should have adjusted my deck more for defense but I was trying to burn him down quickly. I was using a spell that gave me 250% rage every 3 turns at the cost of 4 burn and that ended up costing me. I took out the two side mobs quickly and got the boss under 100 health but I only had 20 health left myself. My last hand had neither block nor the swift cards needed to pull it out. It didn’t help that I had no potions going in, either.

All in all, I think this is a very nice deckbuilder with some fresh ideas.

My first two runs were wins

(If I win the first two runs of something like this, I’d be like “this is broken”)

Won my second Hidden class run (on normal difficulty which is the easiest). That unlocked the tempest class so I’m trying that one next.

Anyone know what I can spend my earned void points on?

So I have been playing this, it’s good fun but I feel a little underwhelmed:

From what I’ve read “normal” is indeed the easy or tutorial difficulty level in this game. Just like the other games like this out there, there are many, many higher difficulty levels.

I don’t know how the other classes play but I like the other things that you don’t like so I guess it’s more personal preference there.

For anyone out there new to this game, in terms of guides or overall strategies for beginning players, I found the following video guide for the beginning Hidden class player extremely helpful. It explains everything extremely well. 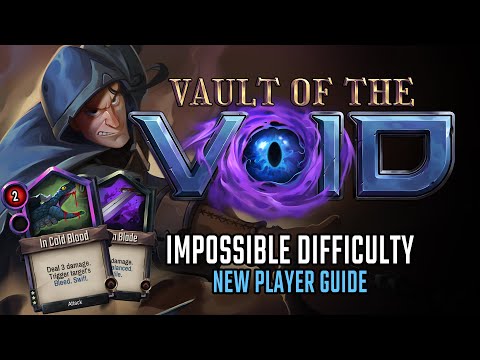 Anyone know what I can spend my earned void points on?

Deck deletion was one of my fav strategies in Dream Quest.

Stuff like this is possible in Vault: The world's greatest infinite combo : vaultofthevoid - notice the deck and discard piles are empty.

The planning focus and low-variance design are what set it apart. Vault is more deliberate and doesn’t waste your time with trivial fights or hopeless runs, at least on normal difficulty.

That said, I’m still always tweaking my builds to maximize impact with rare cards, elite artifacts, new spells, and so on. The balance of options is well measured.

If I win the first two runs of something like this, I’d be like “this is broken”

It’s intentionally more readable than similar games in terms of showing you the encounter designs and letting you prepare for them. The starter decks are built around safe strategies. You can puzzle out what to do with the Void Stones and so on.

The difficulty goes up to “Impossible+50” or higher though, and some players are beating that and the I+30 Challenge Coin runs too, according to the Steam Achievement stats. Seems it’s accommodating to a wide range of player skills and has some longevity.

This is excellent. Easily replaces Slay the Spire for solo deck builders for me.

Hoping Steam Deck becomes ubiquitous enough that games like this get designed to run well on it. From the Steam description it sounds like there might be some text issues with it.

Anyone playing it on the Deck?

Yeah, played a little bit and wow, this is some tight design. So many fantastic options there.

I finished playing all 8 starter decks on normal with an unbroken win streak, but no perfect runs. 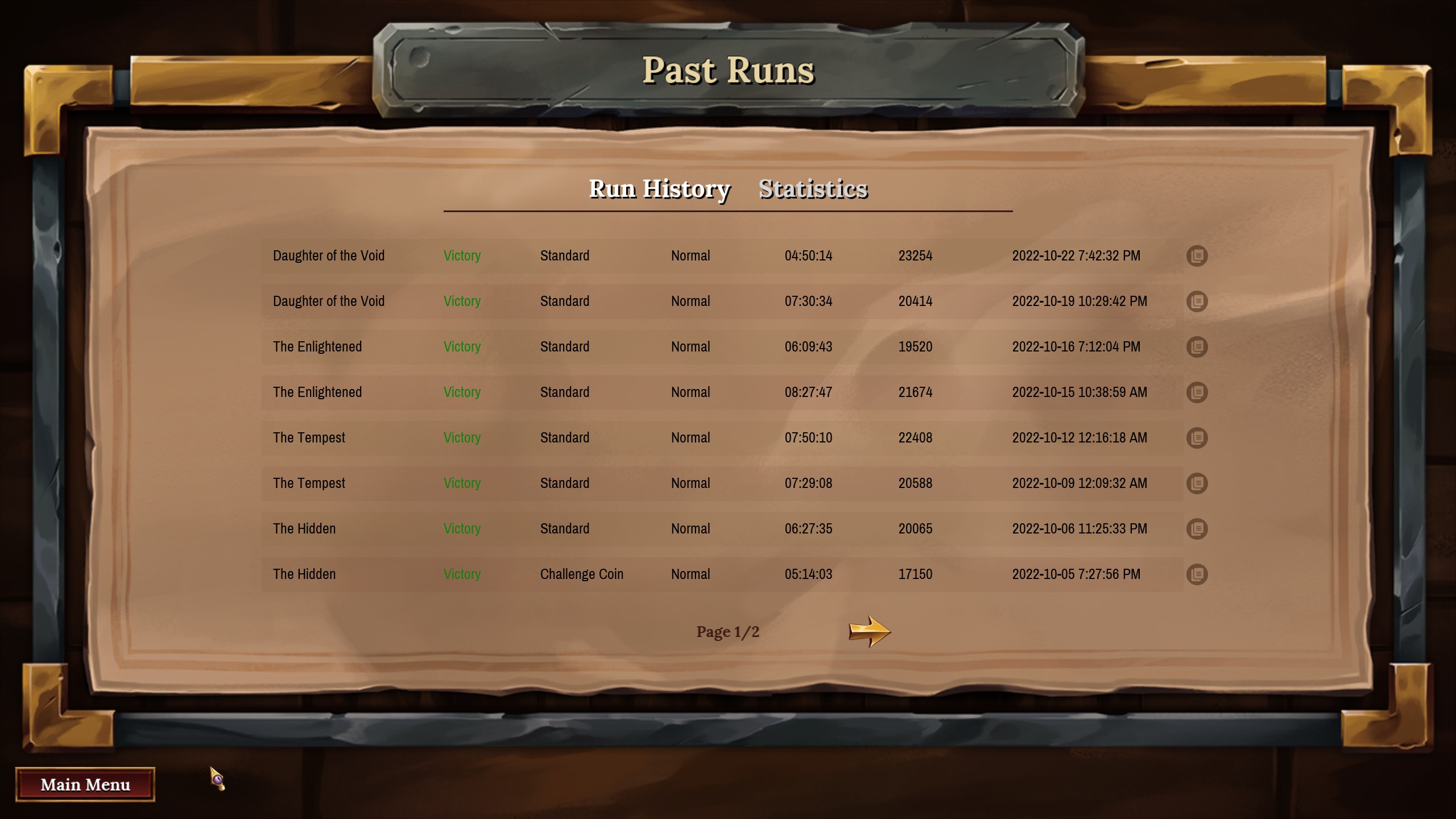 My first run was the closest due to inexperience and using the first challenge coin (only common cards can be equipped, in exchange for extra upgrades + Void Stones). I had 108 pending Threat vs my 100 health when I beat that first Vault on the last possible turn.

The next-to-last run I found this crazy card and added the Swift Knight unique Void Stone: 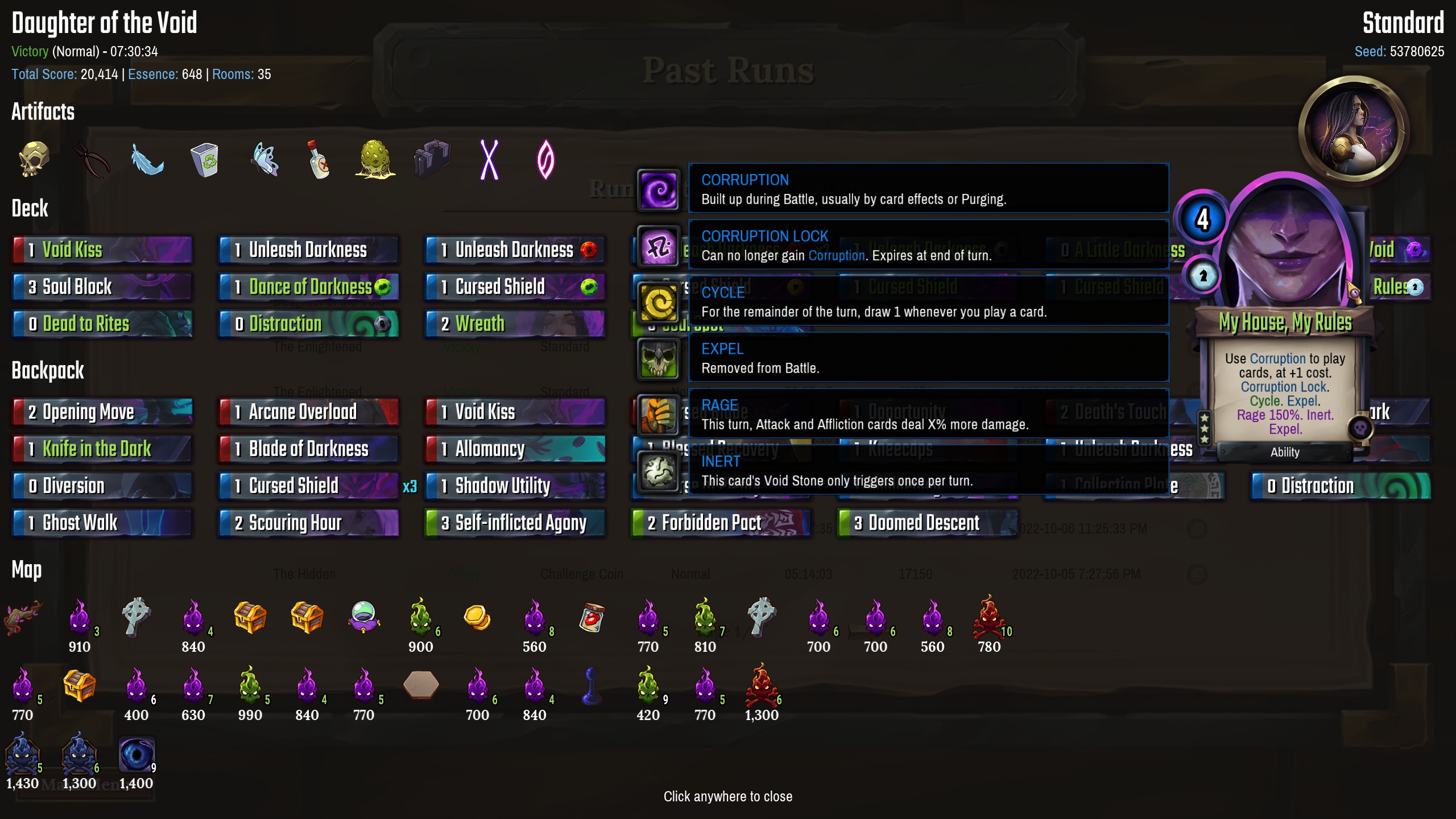 The Cycle upgrade makes it effectively an infinite loop until you run out of corruption to spend, unless your hand fills up with unplayable afflictions. I equipped it for the Vault but didn’t end up casting it.

And here’s my latest Vault kill with by far the biggest hit: 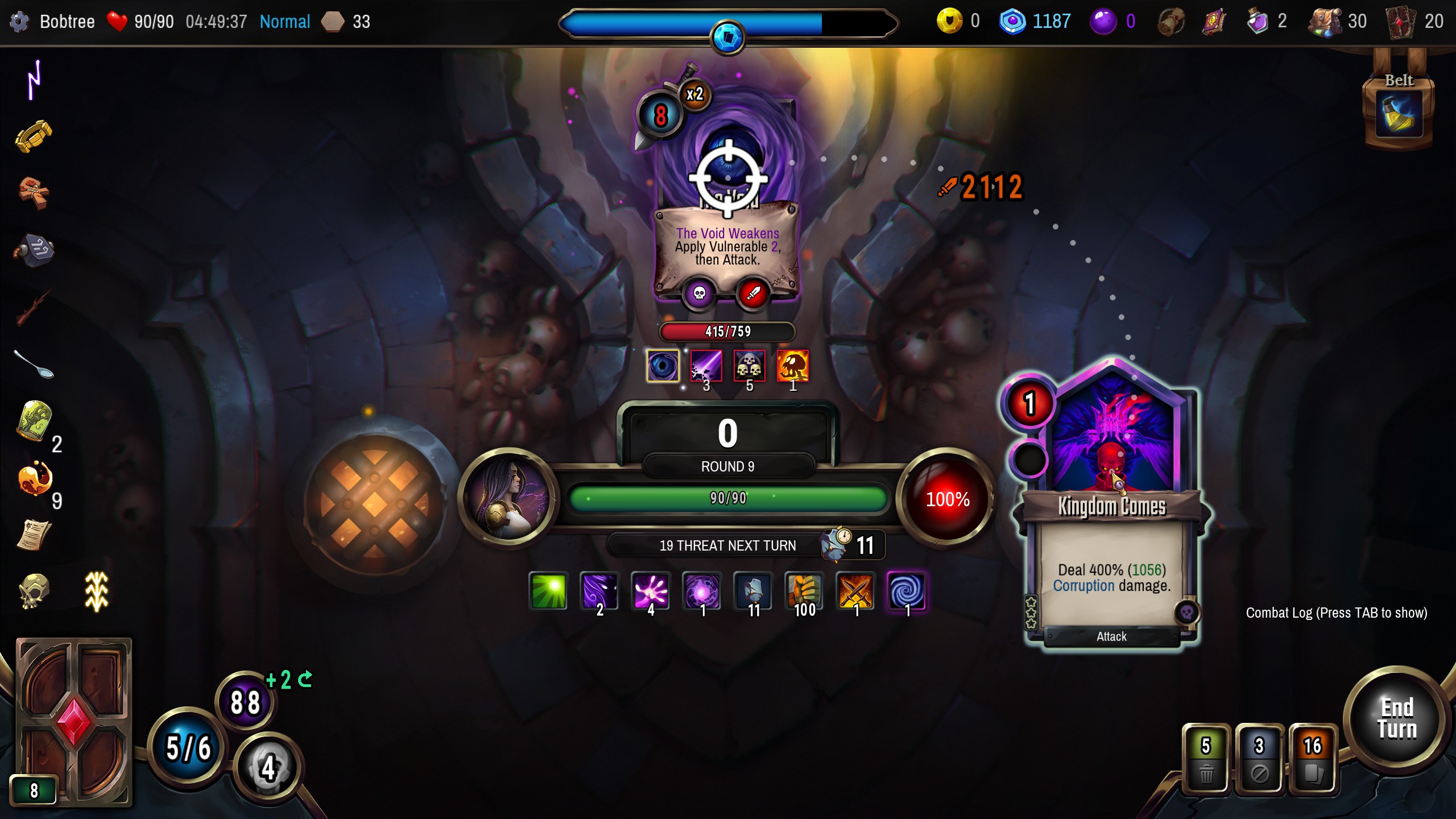 That 1-cost Kingdom Comes card requires two 3-cost setups and shuffles to summon it, plus I had the 88 corruption and debuffs. My equipped spell added 50% Rage, Vulnerability from an artifact, and Deathstrike to double-hit (8 Soultithe Threshold requirement also always met by an artifact). I could have saved my spare Souls for a higher score instead of spending them on the health removal.

The first artifact I picked up that run reduced Soultithe (a self damage status) by 1 per turn, which probably saved me a lot of grief with that deck. I eventually got a lot of passive block generation, bonus corruption for adding and removing Soultithe, and status removal when saving energy. Somehow I lost a 150% Rage card halfway through. I suspect I didn’t read some event text and accidentally traded it for a Void Stone. Luckily the Daughter gains a lot of momentum anyway.

I didn’t think I’d enjoy playing the Enlightened’s streak management style and deck/discard manipulation, but that was fun too. For example: you can Sift and then Recur a card to get it into your hand without waiting to “draw” it, which avoids enemy buffs that happen when drawing afflictions and lets you destroy the annoying cards more safely.

Overall I love the game. Even though Normal difficulty is relatively easy, it was still very satisfying. I look forward to trying some riskier builds in the future, the quicker Daily mode, harder difficulties, and other challenge coins. Highly recommended.

This game is growing on me the more I play it. I don’t think it reaches Slay the Spire levels of awesomeness, but I like it quite a bit and am up to 40 hours. I played through each of the classes, once, but then decided to see how far i can take the first class - alternating between blade and bleed. I just beat impossible +7, perfect void battle with a bleed deck. I had been having difficulty getting enough defense with a bleed deck, but I finally got some awesome combinations of cards and artifacts.