Ottomans could be very interesting since you will start out as a Great Power, so have all options open to you at the start. Then you just have to manage to navigate retaining the nation’s status as a great power against the rising tide. A powerful force to be reckoned with if steered down the right path, which may be easier said than done given some of the challenges facing them.

I’ve just been looking at Victoria 2 over the last couple of days too. I feel like an idiot though. I never really got a solid grasp of the economy which is pretty much saying I never really got a grasp of the whole game in general. Fired up USA and it’s a trick just to get the budget balanced. I don’t really know what I am doing there and how to boost the right income while prioritizing the right cuts.

Sweden is fun. You start out just outside of great power status, but can quickly reach it. They also have some OP pops, with the highest initial education in game.

They also have some OP pops, with the highest initial education in game.

Lol the devs are shameless.

I’d put a vote in for Sweden. Forming a vast Greater Scandinavia is an attainable goal, and it makes you a world powerhouse.

Thew all the suggestions in a hat (literally) and drew Ottomans.

I have my suspicions this recommendation is because it’ll be fun to watch a noob take the sick man of Europe and make him sicker, but I like the challenge because Vic 2 reminds me (and yes I know this might sound like an odd connection) of Rimworld in that you make a variety of decisions and then see how it goes and what comes out the other end are the stories generated along that journey.

I’m loving the game and look forward to plowing into this campaign as the Ottomans, and if this proves even modestly entertaining I’ll be up for Sweden next.

How do you find this/install it?

These days the Historical Project Mod (HPM) has its own GitHub, but you can also find it on ModDB too. Then it should be as simple an unpacking the contents of the zip archive into the Mods folder in the Victoria 2 directory within your Steam directory, if I remember correctly.

Yepper, it’s a bit old school in the mod dept as I guess it was before steam workshop got going if I had to guess and they never circled back to implement it.

So you have to manually unpack them into the mod directory.

Edit: btw, I don’t know what exactly HPM does, beyond the introduction of serfs, so guess I’ll find out as I go along

So obviously I have to load up Victoria 2 again and have quickly discovered how oldschool an experience this is going to be. I bought this on Steam at some point, right? Nope. How much is it? $50+ for everything? Nope. Turns out I own this on Gamersgate and that’s still a thing and the experience is still terrible. So now I get to download the base installer and follow that up with each expansions installer before moving on to figuring out how to install this mod. The good old days!

Yes, it is a good reminder of how things have gotten a bit more streamlined and user friendly over time.

Would have been nicer to find that out during the recent Steam Summer Sale, everything was pretty heavily discounted. Victoria 2 might have pre-dated Paradox games getting Steam Workshop support but it did at least get support for the game, expansions and DLC themselves being pretty hassle-free to install via Steam.

No idea what the GOG version of Victoria 2 is like, but one would hope the Galaxy version is as one click to download and install everything as the Steam version is.

It gets a 75% discount on a very regular basis - it’s been on my WL for years - on Steam so you wouldn’t have to wait too long.

Make the Ottomans Great Again (or not)!

This kicks off our journey with this first installment as to where we find ourselves at the outset: January 1st 1836.

The Ottoman Empire is an Absolute Monarchy, 84% conservative made up predominantly of Muslims and Eastern Orthodox. Literacy is a problem at the abysmal 7.4%, so just about no one could read this dispatch outside the palace. Easy to detect spies, anyone literate. To address this research was begun to increase educational efficiency and population focused on intellectuals.

We’re #7 among the top 8 great powers, more as a result of no one of consequence being below us. Sadly there are no factories in 1836. So the ranking is only sustained at present by prestige and the military. 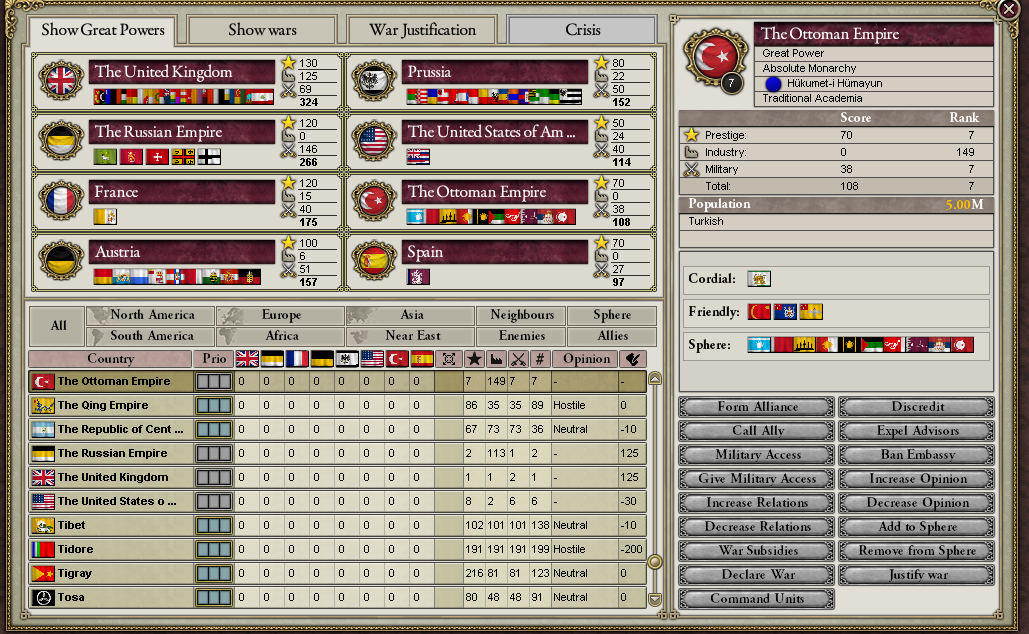 From a resources stand point we’re not in bad shape, if we can get industry online there’s coal, iron, tobacco, fruit, grain and sheep: 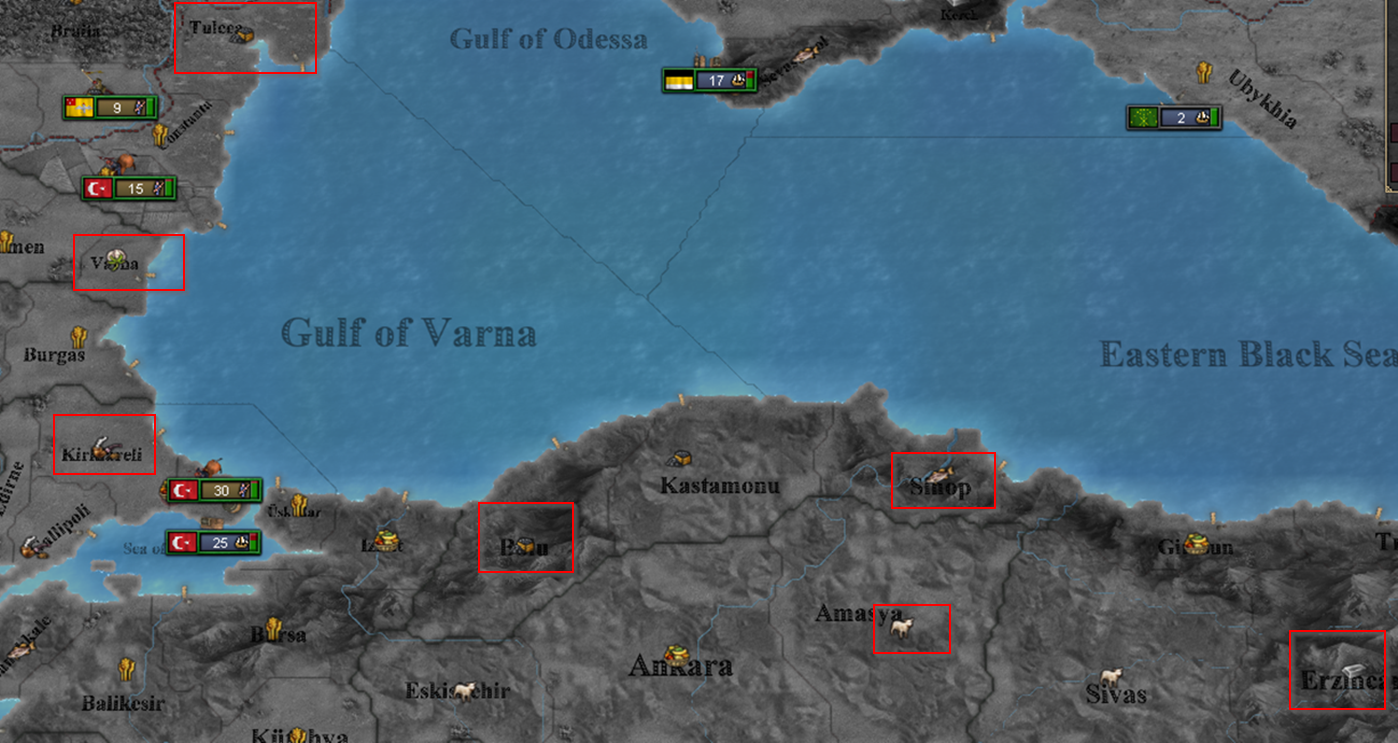 I don’t recall who said it, but it stuck in my mind, and this is a paraphrase of it about the region: it produced more politics than could be locally consumed. The Ottoman foreign minister is fully convinced that applies to much of the empire, whether it’s Serbia, Moldavia, Caucasia, Egypt or the Greek cores this looks like a recipe for a great unraveling. The challenge: what to keep and what to sacrifice.

And speaking of sacrifice one of the best ways to avoid doing too much of it will be diplomacy with other great powers. The plan being to make sure we ally with the likes of Great Britain or Prussia / Austria as Russia does not feel trustworthy enough since we expect them to come at us over say Serbia. France would be nice too but our relations at the outset are frosty.

On to military matters. We begin in 1836 at war with Tripoli and see no reason not to immediately and aggressively press this to a successful conclusion. We’ve requested our puppets abutting Tripoli to join us in this glorious conquest, Tunis gladly joined, Egypt less so:

General Wojciech Chrzanowski leads the 2nd army, a romantic cartographer, so a man with a big heart who knows his way around a map and provides his army 50+ morale and 50+ speed and is on the march w/ 18,000 men to join up with General Resid Mehmed Pasha leading 6,000 who is in sore need of help as he’s known to be both elderly and inefficient.

Dispatches from the front forthcoming in next installment.

Its funny, the Ottomans are basically the reverse Swedes.

When i play Russia i try to keep consciousness and education as low as possible. Can’t let the peasants get ideas.

When I played the Ottomans, I remember grabbing some early “uncivilized territories” to the East, and going all in on education with the hope of colonizing Africa. I pulled it off once (not all of Africa or even most, but enough). I finished that game as a top three or four power. The nice thing about colonization is unlike war you don’t need a belligerent government type to grow, so you can pursue books and land at the same time!

Do Britain and Russia compete in Central Asia? I need to read The Great Game again.

I’m really impressed with this mod so far in my Sardinia-Piedmont game. Everything fits really well to the point that I struggle to remember what is from the vanilla game and what’s new. However, I’ve noticed so many of the systems(market and revolts) seem to be smoothed out and feel a lot better. The techs seem very similar to vanilla so I’m not sure yet if they are really better balanced or if there are really worthwhile techs and really worthless techs still. It seems like some of the early industrial inventions might be toned down a bit.