As much as update 1.1 seems like two steps forward and one step back in a lot of ways, the small UX tweaks they’ve made all over the place are very nice. Don’t think a lot of them were even in the patch notes, but they make things a lot smoother.

Just saw that a hotfix is coming tomorrow, but I’m not sure what will be in it. Industrialist fix I’m sure.

Playing Austria is interesting so far. I think from my game in Japan I had it in my head that I needed to crush the landowners. I need to loosen the discrimination laws so I can recognize the Hungarians and not drown in radicals from discrimination. That law change is a big -20 for the landowners. So I went about lowering their power, which tends to piss them off.

Except that with the legitimacy system, even weakened I can’t form even a weakly legitimate government without them to get the law passed. So now I am thinking maybe I need to actually appease them, get approval above 10 so the -20 for the target law doesn’t actually push them out of government. That seems easier than the alternative of ending the monarchy straight off, though that is also tempting.

Also pulling German minors into my camp and sabotaging Prussia at every turn is fun.

Doesn’t look like the Legitimacy issues are being addressed in 1.1.1, but another patch is incoming next week (content unknown).

Hello Victorians! Today we released a minor patch to correct some issues, and we're planning to follow it up with 1.1.2 next week for some additional adjustments. Please report any issues in our bug report forum or submit a support ticket...

So I think the change in 1.1 to how buildings adjust wages is welcome, but it can have some weird effects. I noticed that standard of living was dropping in one of the state where I was building a lot of iron mines (to try to counteract France stealing all my iron…).

It turns out peasants are willing to take jobs at the iron mine that result in a pretty significant drop in their standard of living. From 11.5 to 7.5. I guess they value the subsistence boost to SoL at approximately zero. The iron mine owners, in true capitalist fashion make money hand over fist because iron is expensive (damn the French), but have no incentive to raise wages because there are still plenty of peasants to lure in to their doom.

It’s all a bit weird because the way I think it should be working is my expansion of enclosed grain farms and ranches drives peasants off the land into unemployment, where the only source of sustenance they can find is to do back-breaking work in the iron mine. But in this case, there’s still plenty space on the subsistence farms, and I haven’t even expanded enclosed farms in the state in question.

This actually drives me to prioritize automation production methods a bit more. Previously I would rather someone be a labourer and have a higher SoL than a peasant, but for now I think I need to minimise the amount of labourers required since it’s actively killing my population.

That does seem weird and quite counterintuitive. Why would someone take a job that resulted in a lower SOL?

Doesn’t look like the Legitimacy issues are being addressed in 1.1.1

What about the issues that prevent certain IGs (industrialists) from getting clout? I’m having a hard time telling whether they fixed that, but it seems like that would make the game pretty unplayable. I put this game on a shelf after hearing about the 1.1 bugs and I’d really like to get back to it, but I don’t want to get deep into a run only to find out its fucked after dumping a bunch of hours into it.

What about the issues that prevent certain IGs (industrialists) from getting clout?

Yes, this is fixed. It’s the note about capitalists and a couple other pop types being politically inactive.

It seems to be due at least in part to discrimination. Wages are reduced for legally discriminated pops, but not subsistence. Once I managed to pass new laws, SoL of the laborers got much closer to the peasants, maybe even a tad higher.

Those government changes will be big for anyone playing the game. The changes to generals moving will be very big in certain circumstances. I’ve certainly had fronts resolve with the assigned generals traveling back across the world before. Can really screw things up depending on the war.

This bug was also a pain. Glad to see it fixed:

I’ve certainly had fronts resolve with the assigned generals traveling back across the world before. Can really screw things up depending on the war.

Oh god yes. It was so insanely frustrating when I’d put a general on a front, he’d push it forward and eventually it would split into two fronts, then he’d push his side to completion and just pack it in and head back home. Then the enemy deploys to the second front and undoes everything before I notice and get him back to the theater.

How are things going with this now? I’ve been so busy with other games I haven’t had time to really dive in.

My general feeling is the economic and political/government stuff works pretty well. I think the war/foreign policy isn’t as strong. That area should be getting the next update.

I do find the game a lot of fun as is, but it depends on what aspects interest you the most. I really enjoy playing it as a government and economics simulator.

I’m likely waiting for 1.2 to jump in with another campaign. That update should have some bigger changes to help shore up the biggest issues. Hopefully that’ll be out by the end of February.

I’ve played a few games up to the 1890’s and tended to lose interest once the internal political and economic constraints really fell away. I feel like the point where you have the laws you want and more money that you know what to do with comes too soon.

I played a Japan game with an improved AI mod and that improved opponent economies enough that I didn’t feel I could just walk over them, but I didn’t feel that engaged with the diplomacy. Great Britain could jump in to full blown war over any expansion attempt, no matter how small or how little it related to existing British possessions. China and Korea were advanced enough (due to the mod I think) that I didn’t figure I could take that territory - I did have better tech so maybe it would work but I just didn’t have the appetite for it. 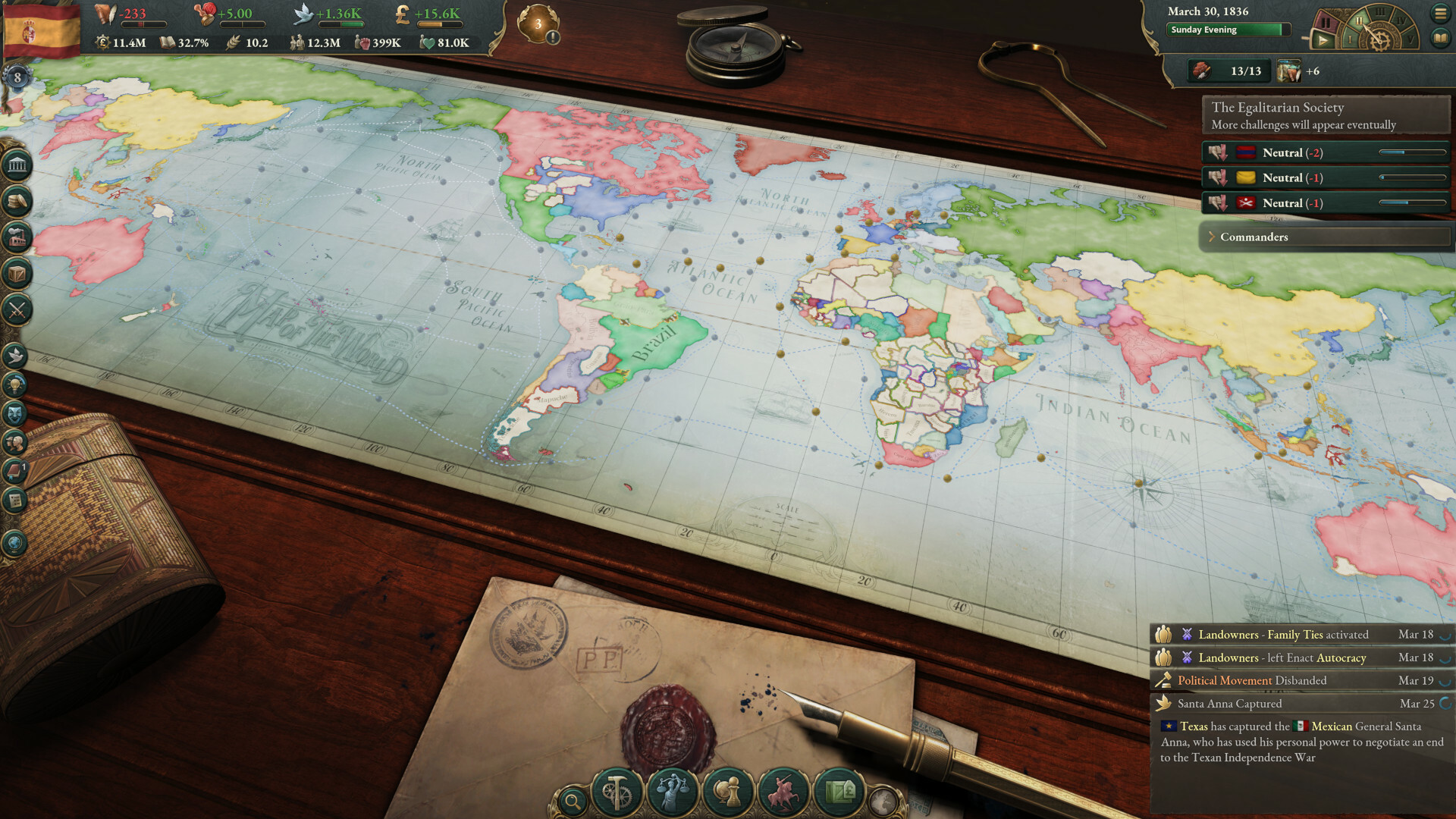 How the designers of Victoria 3 made a compelling global economy

Making the system both historically accurate and fun was a tricky balance in light of the game's strategic complexity.

In this edition, Mikael Andersson, lead designer on Victoria 3, reveals how his team approached modeling the game’s economy, addressing some of the issues that arise with similarly complex strategy games.

First big surprise feature of 1.2, private construction is making a return! Seems like a pretty reasonable direction to just turn the investment pool into funding for private construction. Now it’s just down to the AI not being entirely stupid about what it builds, but using the built-in tools to try to build profitable industries sounds like it’s already better than whatever the hell Vicky 2 capitalists were doing.

Hello and welcome to another Victoria 3 dev diary! Today’s diary marks the start of dev diaries about Patch 1.2, which is the next major upcoming patch for Victoria 3 (release date to be announced). As with 1.1, 1.2 will contain a slate of bug...

That’s a big change but I think the right call. Landowners spending their money to expand the agricultural sector and enhance their own wealth might make them a bit harder to lever out of power as well.