So I am nearing the end of my Chile run. The trick was to start out very slow, expand construction conservatively, and make sure the price of my inputs was at or below base value. I’m around the number 9 power now with about 7 years to go and the end game has turned into a slog. At around the turn of the century, my economy took a giant dump and I’m not sure why. Possibly i overbuilt government administration trying to get the skyscraper. Anyhoo, I slashed expenses and should be able to complete the run, but the last years have been pretty boring. It’s fun learning the systems, but I’m concerned that most countries are going to play pretty similarly.

You have to be a bit more conservative\careful at the beginning with your construction sectors and debt spending when starting from a lower/smaller economic base, such as with Cape Colony.

There should be a diplomatic play you can do on your overlord to get independence. I don’t know if there are any mechanisms that don’t risk war.

It seems that the issue where capitalists are eager to share the profits with their workers will be going away in 1.1:

How does industry decide to lower wages vs. fire workers?

I would rather my industries reduce wages rather than fire their employees and create more radicals. How do factories decide what to do and is there anyway for the player to influence this decision? EDIT: Thanks to @CrabHelmet for supplying...

This would change quite a lot. No automatic wage increases unless the building is struggling to hire. I think this effect was driving some weird wages mentioned earlier in this thread.

but I’m concerned that most countries are going to play pretty similarly.

I think there are a list of factors that potentially make playthroughs quite different. Here are the ones that come to mind, but I’m sure I’m missing some:

’m concerned that most countries are going to play pretty similarly.

I had a fun playthrough as Persia. Now as Dai Viet (Vietnam) it’s getting pretty same-y. IMO, Warfare and Diplomacy need a lot more depth to keep things interesting, but this goes hand in hand with a LOT more cultural/area specific events/tailoring. Playing Vietnam and seeing the same old graphic of European Victorians walking by other European Victorians talking about lack of opportunity for the Min ethnic group is kind of representative of the genericness and lack of interesting cultural and historical variety that the game really lacks right now.

The only interesting difference from Persia is being stuck in an Absolute Monarchy in Vietnam as opposed to the Qajar Shahdom (more easily reformed). But seeing every group as the same (Same ole Petit Bourgeoise or Trade Unions) without any nod to local specifics and uniqueness turns it into a “do I upgrade my Coal Mines to Steam Donkey now?” sameness. When it could be so much more colorful and interesting.

As did I, and they got that right. There’s a reason it didn’t happen until the 1920s. VERY hard to do. It was incredibly incredibly intertwined into the society and local political networks as an institution and only the “etch a sketch” nature of the of the Great War and the rise to power of Reza Pahlavi over a state that had essentially become an anarchy even made it doable.

The universal method that I know of is using the Independence diplomatic play, when playing as the puppet (dominion, vassal, etc) nation. The overlord nation in the partnership has the ability to grant independence via a diplomatic interaction too. There may, or may not, be some decision related alternatives that I am currently unaware of for some nations too.

I think there are a list of factors that potentially make playthroughs quite different.

Thanks. That makes sense. I guess the concern is that while the different starts may present different early game challenges, isn’t there always a pretty much optimal path as you get deeper into a run? The tech tree is the tech tree. You always want to get certain techs sooner than others and eventually you’re going to get them all anyway. But aren’t you always going to aim for the same laws? Or is there a reason for certain societies to prefer different laws over others. Why would anyone choose, for example, Anarchy? Is slavery ever a viable option?

Personally, with some countries I prioritize early colonization, with others I don’t, and also my emphasis on mining techs varies. On the laws side I have tended to aim for the same long run policies though of course the paths there can be different.

What’s your initial place in the world. I’ve watched developer playthroughs of Mexico and Egypt and in both cases, there is a big bad that’s looking to gobble their territory — I had similar concerns with Persia and Russia, but I think the US for Mexico and the Ottomans for Egypt are even more immediate concerns.

Funnily enough, I would have the situation the other way around for military strength in regards to Egypt and the Ottomans, in 1838 at least.

Whilst the Ottomans have a slight edge in terms of numbers, for their standing militaries, they lack greatly in terms of troop quality compared to Egypt. As the Ottomans start off with the Irregular Infantry and Cannon Artillery production methods, whilst Egypt has the Line Infantry and Mobile Artillery production methods. What small advantage the Ottomans have in numbers is, in my opinion, rather negated by the technology advantage that Egypt begins with.

Being the Ottoman Empire isn’t the easiest walk in the park, that is for sure. Especially with the way the ‘Sick Man of Europe’ event chain can unfold if you fail to achieve the required minimum of four Tanzimat reforms within, if I remember correctly, twenty years.

I think some things like slavery are just always worse, which is how it should be. The challenge is in getting rid of it without causing a civil war. Also some of the backwards economic laws.

There are other laws, though, where a wider variety is viable and I think they continue to try to strengthen some that are weaker. Authority is pretty useful, so granting a bunch of freedoms quickly means you won’t have that. Elections make it harder for you to keep all the IGs in power that you want.

Now, I still think they’ve got some work to do on this to balance the impacts, but not all laws are super clear on one always being best.

Finished a nice game as Brazil yesterday. I didn’t blob or colonize, I focused on self improvement that involved a civil war smack down on landowners owning people but eventually I finished as #5 world power. I only did trade agreements, no defensive packs, no alliances, no customs unions, and as a result I had no income anomalies where everything was fine followed by -130K space bucks deficit.

Starting a new game as Spain and I noticed frame rate issues that I didn’t see before. Something about Europe needs to be optimized by Paradox because the stuttering is distracting.

Electrcity is like any other good right now (though not tradable), so anywhere that has market access will be able to buy electricity produced elsewhere.

I assume this will (counter-intuitively) apply to overseas bits of your market, but I haven’t tested it.

One thing that feels off about the game is the UI around buildings. I feel like everything about the construction queue is designed around very early-game quantities of buildings. It’s great when you are constructing a few buildings at once. However, if you are playing a larger power, your buildings in construction fills up the first whole page (and this is only 1868). Maybe they could show all iron mines in construction as one item and you drill down to adjust priority of individual projects or something.

Also, when you are just starting out, each building might be exciting. Your first tool workshop! Your first steel mill! Later on it feels more “oh god, I have to feed the construction industry with more stuff”. It feels like talking about individual buildings is not the right level of description - maybe it should be more like setting focuses or growth targets within provinces.

If you can stand the decreased control, you can of course turn on auto-grow on your industries once you’re big enough to not need to think about where every construction point goes. Then you can focus on the big ticket items like new industry types, fixing critical resource shortages etc.

Doesn’t make the UI any better at showing the build queue, just makes it matter less.

They released a screenshot in one of the diaries showing improved UI in that area, if I remember correctly.

The first of these changes is a rework of the interface for individual Pops, with a particular emphasis on improving the visualization of Pop Needs. In addition to the general overview, there are now separate tabs for Economy and Consumption, with Economy showing a more detailed breakdown of the Pop’s income and expenditure, as well as their top 5 Goods expenditures, and the Consumption tab showing a detailed breakdown of all their Goods expenditures, along with pricing information for the State and Market. We also plan to iterate on Pop Needs further in the future to give you a better idea of what your population needs are country-wide. 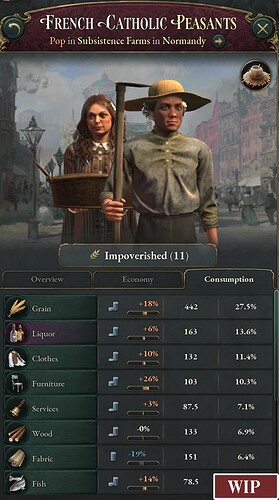 I had a fun playthrough as Persia. Now as Dai Viet (Vietnam) it’s getting pretty same-y. IMO, Warfare and Diplomacy need a lot more depth to keep things interesting, but this goes hand in hand with a LOT more cultural/area specific events/tailoring. Playing Vietnam and seeing the same old graphic of European Victorians walking by other European Victorians talking about lack of opportunity for the Min ethnic group is kind of representative of the genericness and lack of interesting cultural and historical variety that the game really lacks right now.

I’m taking a break from the game for exactly that reason. US, Brazil, Sweden, Egypt, Somalia, The Qing, Prussia and a couple of other countries. Didn’t really feel that different through the 1860s. Armies are too cumbersome to really make war interesting. You make slightly different choices on tech trees, depending if you have too many or too few people.

I still think this game has a lot of potential, but I’ll probably wait until the first expansion, which I get for free before invest a lot more time.

Sure hope they have a similar design for any group of pops. Tooltips already allow to see needs of different strata, it would be nice if that screen could be opened for all radicals, all poor people, all people in a specific province etc.

I agree this is where my biggest frustration with the population is. I can either view population at a nationwide roll-up or I can drill down to individual pops. There is no info about specific groups of some number of pops that share some trait. Or even really no good info on the population tab that lets you select each individual pop.