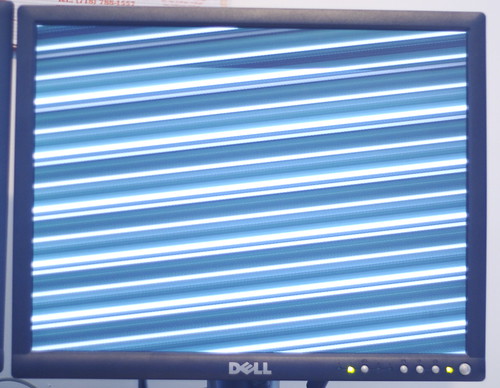 Here is a mystery: My EVGA 7900gt works fine in Vista Aero on the desktop, can even run WoW without issue, but pukes almost without fail on any 3D game that takes any oomph, including, unfortunately, the Bioshock demo.

Once it enters this state, I can’t alt-tab out to the desktop or anything to fix it. I have to hard boot.

So the question is: Borked hardware or bad drivers? You’d think that being able to run WoW would indicate it’s not a 3D issue, per se, but then again maybe WoW doesn’t tickle some magic silicon inside the card that is failing when I put a heavier squeeze on it.

Unfortunately I’ve had a hard time troubleshooting this one via the net, since it’s hard to explain the way the error affects the output in text to find others’ solutions.

Google for “diagonal lines” + 7900GT and you will get lots of results.

Ugh. Sure enough. I just called eVGA and had a real prick of a customer service guy tell me that it was “a Vista issue” and that I would have to “wait until Nvidia fixes it.”

Sucks being a Beta Tester for M$ doesn’t it?

My XFX 7900GT had that EXACT problem (and on a dell monitor! 2001fp perhaps over DVI?). Anyways it would only happen occasional but it got very annoying in guild wars (which hardly pushed the card that much). Temps were fine. Underclocking made no difference. After a bit of back and forth with tech support (both arenanet and xfx) we were pretty sure it was the card. I had the card swapped out with another xfx 7900gt. This one worked better but not perfect. Guild wars was fine. But if I boot ubuntu linux 7.04 live cd, I could hear the desktop boot up sound effect but all I would get are those diagonal lines. This fact makes me think something is just borked in the 7900gt at the video bios level. Also, analog (vga) out wouldn’t work on one of the dvi ports.

so just recently I went back and forth for another month of tech support and finally GOT OFF THE DAMN 7900GT line since they were out of stock. So they shipped me a 8600gts and everything works fine so far.

I’m now sort of convinced in my own little world that 7900gt = issues.

Oh this was all under windows xp btw.

edit: Here’s is a work around that kind of worked for me (not a solution though). If I forced AA on (I think 4x) either in the app or at the driver level it actually reduced the occurrence of diagonal lines. Yeah make the card work hard so it’s more stable??? Makes no sense to me either.

So I fixed it. I can even play 3D games now. On the advice of some random tech forum user who was experiencing the same thing, I overclocked my card’s video memory 8Mhz. (He suggested 5, but the little slider wouldn’t let me get right to 755MHz.) For god knows what reason, that did the trick. I can change resolutions with the best of them now.

Yeah I’ve read slight oc of memory of 2-5mhz too. I tried that with mine and it didn’t help at all. Glad it works for you. Hope it holds.