I skipped this when it came out, guess I’m gonna find out what the hoopla was about next week as it’s free on Epic Aug 19th.

After having this linger on my wishlist forever, mainly due to praise I read here, I finally picked this up recently when Epic was giving it away. I just finished it today. What a great game. It’s rare a shooter type game holds my interest long enough to complete it. They did a really good job of not making it too grindy and making death a setback you want to avoid at all costs without making it a potential ragequit inducing event. The pacing of the bite sized missions was great. I’m even considering playing though again or doing the challenges.

Do a video playthrough! I couldn’t get passed the first “part”. (after getting the printer and id I think). I keep dying.

My best advice is at the start, don’t even worry about the goal and focus on getting parts to build and upgrade equipment. If you pass by the part you need for the current goal there will be another. Getting the armor upgrades is key. Later weapons make things a lot easier. Plot your course based on what parts you need to gear up, and how dangerous the enemies are.

Once you’ve geared up enough to have a client survive a while, go out of your way to go to ships where you can add or swap traits. Toward the end my guy has a trait that showed enemies on the minimap.

I had just given up on this game. To me it’s a game about sneaking around with no weapons. And if you’re found out (because stealth is not easy or obvious in this game), you die, because you have no weapons to fight with. Lame!

At least System Shock 2 started you off with a wrench with which you could kill the starting enemies.

I had just given up on this game. To me it’s a game about sneaking around with no weapons. And if you’re found out (because stealth is not easy or obvious in this game), you die, because you have no weapons to fight with. Lame!

At least System Shock 2 started you off with a wrench with which you could kill the starting enemies.

I think it helps to think of Void Bastards as a heist game instead of a combat game. Combat is just one of the tools in your toolbox. Sometimes you can’t use it or don’t even really need it.

It did take me a bit to get over the “What!? No melee weapon!” feeling. I mean, how else am I supposed to finish the game with ridiculous amounts of unused ammo?

Yes, the other tool in my toolbox was running around with my hair on fire until the big guy finally caught up with me and killed me.

Fleeing and locking doors behind you is a primary strategy. Though later you get the opportunity to occasionally pop off a clusterfrack before slamming the door shut. Which is nice.

It really is a heist game. You’re there to get parts, fuel and food and get out without getting shot up too much. Often you just have to decide to bail out with whatever you’ve got so far. Thinking “well, I’ve got the part I came for, but I didn’t explore over there…” is usually how I died. Taking a moment to look at the map before entering a new area and planning how I’m going to flee the ship if things go sideways was also a key strategy.

Sounds a bit like a 3D version of Invisible Inc. I always out stayed my welcome looking for a bit more in that one too.

It really is a heist game. You’re there to get parts, fuel and food and get out without getting shot up too much. Often you just have to decide to bail out with whatever you’ve got so far. Thinking “well, I’ve got the part I came for, but I didn’t explore over there…” is usually how I died.

Ha, well there it is. I’ve been generally trying to clear every level (of loot, I know enemies respawn). It never once occurred to me to mad dash towards the required object, then bolt. Seems like I’ve always had a need of food, fuel or both, which is what started me down the path of clearing each level.

Every time someone mentions this game, I’m reminded how much I love it and get tempted to reinstall it again. Soon…

Yeah, I still have it installed because I keep intending to replay it!

I tried this out today after I saw the thread pop up here on the forum a few days ago and I have to say it’s quite brilliant. I’m probably a little too aggressive with trying to get all the times (still in first ‘tier’ though) but I like that the game makes you think and plan, and some of the negative map mods are deceptively tricky to deal with, it can lead to some very nasty combinations if you get periodic power outages for example.

Also, I cannot believe that this runs on Unity. Hands down the smoothest playing Unity game I have played in my life. This is exactly the kind of performance I expect from a game with this level of fidelity and yet so many devs fail to reach it, so this is definitely a breath of fresh air.

One thing I am unsure of is if the ships are randomized on each campaign restart - the first few at least seem to follow the same rules, based on my observations from 2 started campaigns so far.

Yes, they should be randomised, except the first “tutorial” ship. I’m certain when I restarted the campaign early on, that the second ship was quite different after the tutorial, but it’s been a while.

And agreed about performance. A similar example is Overload, both games by long-term veteran devs who know their way around game engines (having built their own in the past).

I really messed up last night. Jumped to a node and completely overlooked that there was a gene twister on it. And not having prior knowledge, I rested at it, further randomizing my traits. Now instead of having auto pickup, low profile, etc, my character screams every time he picks up loot.

Not gonna lie: I laughed. What’s that trait called out of interest?

It’s called Yahoo, and yep, that is the word that you scream. Here’s what I’m dealing with right now, security heavy ships are a nightmare. 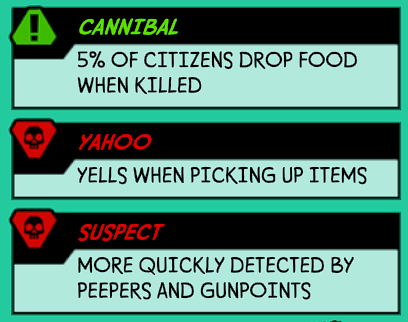 Damn it. I want to play this (again) now.

And I finished my first run! Played on normal difficulty and actually managed to keep my very first character alive throughout the entire campaign! Granted, I did quit on some maps and loaded back to the ship (stellar design btw, thanks devs!) when I saw that I bit off more than I could chew, but since it was my first run I think I’m forgiven a little bit of ‘cheating’, at least as far as roguelike gaming goes ;).

The game itself is absolutely brilliant, the only real complaint I have is that it’s a little goofy as I’m simply not into that, a more realistic setting with mostly the same mechanic would be absolutely superb though. Other than that, extremely well rounded game, amazing performance, fantastic visual design that makes it really easy to see the important stuff and I’d wager that once I step up to higher difficulties I’ll start appreciating the various enemy types and how to deal with them, as well as managing the maps (ships) against time and other constraints, even more than I already did on normal.