Voyagers - The 2021 semi-competent Lord of the Flies in spaaaaaace! 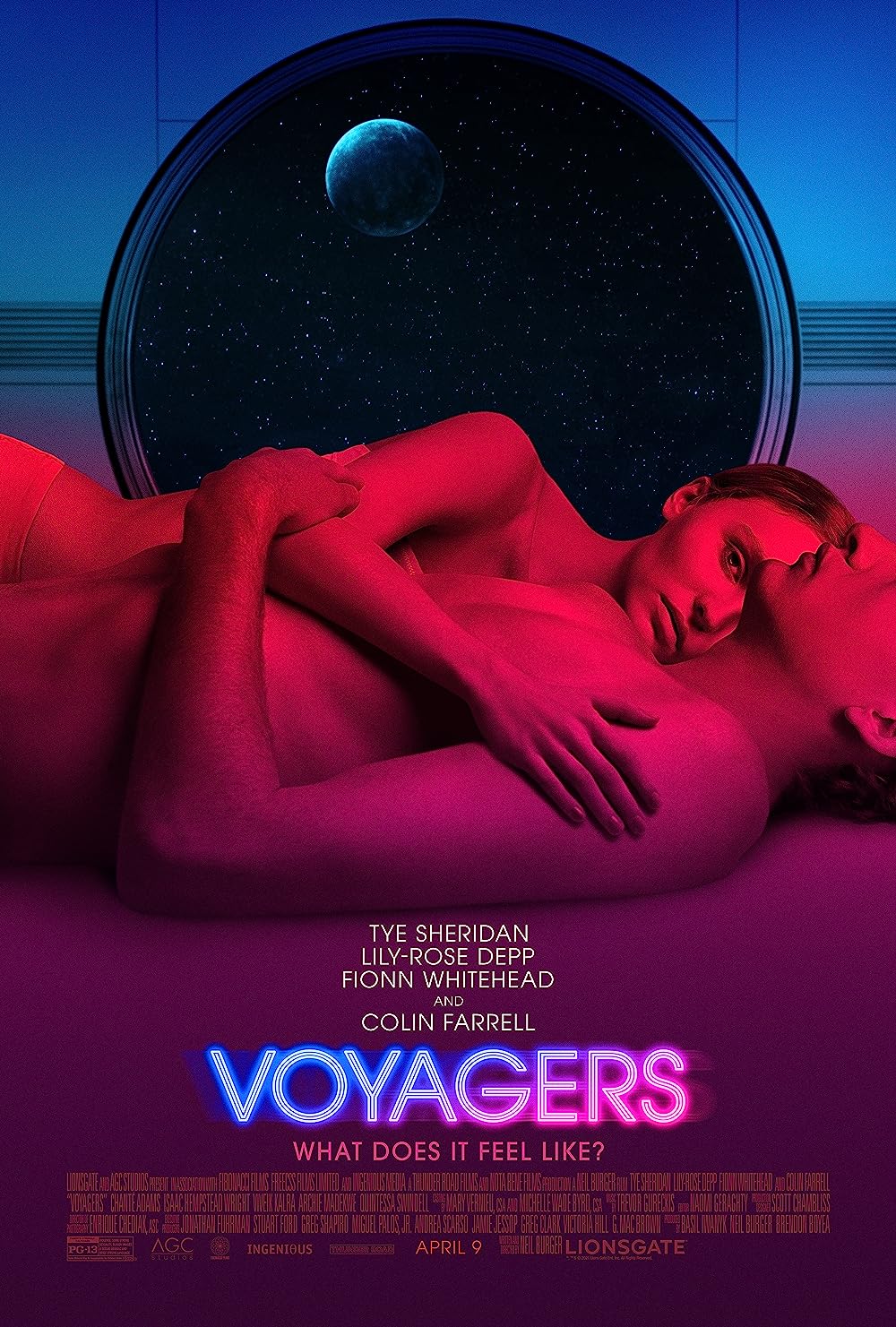 Voyagers: Directed by Neil Burger. With Tye Sheridan, Lily-Rose Depp, Fionn Whitehead, Chanté Adams. A crew of astronauts on a multi-generational mission descend into paranoia and madness, not knowing what is real or not.

Let’s start with an aggressively stupid setup. Earth is in trouble, yadda yadda, so they decide to send a ship full of primary school aged lab-grown children into space on a generational starship and hurtle it on an 86-year voyage to the closet habitable planet. It’s expected that the first generation of astro-kids will die along the way, then their kids, but their grandkids will make planetfall. Colin Farrell goes along to be their captain, at least for the first leg of the journey.

The ship is mostly a series of cramped hallways with lighting on the floor and ceiling edges. There are rooms, but they’re all white and bland, perfect for growing young minds, right? Nondescript plastic-looking food bits provide sustenance. Surely, the children won’t get bored and yearn for more.

In ten years things go awry. Who knew that a couple dozen teenagers trapped on board a sterile white spaceship forever with nothing but fluorescent lights, menial busywork, and one befuddled father figure would run into trouble? See, the mission protocol includes feeding the kids a drug cocktail (simply called “Blue”) daily to suppress their teen urges. Keep them docile. Of course, they figure this out and secretly go off their meds. Chaos ensues.

Tye Sheridan and Fionn Whitehead take on the Lord of the Flies roles of Ralph and Jack respectively, here called Chris and Zac. Lily Rose-Depp is the gal they fight over once their urges are no longer suppressed. The space version of Piggy is Phoebe, here envisioned as a girl that wants to follow mission control’s original plan. A possible “alien” threat takes the place of the book’s “beast.”

Neil Burger (Limitless) wrote, directed, and was one of three producers. It’s not great, but I guess if you want to introduce Lord of the Flies to the younger generation that expects a few steamy looks and pretty bods along with their stranded island conflict, you could do worse.

One thing that strikes me about these blatant Lords of the Flies homages is that they come across as so cloyingly “young adult” to me. I don’t remember that being the case with Lord of the Flies when I read it, but I haven’t read it since I was a YA myself, so maybe I just didn’t notice.

Also, poor Tye Sheridan just can’t catch a break. The guy gets stuck playing hangdog schlubs in mediocre movies. Even in Paul Schrader’s The Card Counter, it looks like he’s going to have a great role along Oscar Isaac. But, nope, he ends up just being a hangdog schlub sidekick. Which is one reason I really like a Christopher Smith puzzle movie called Detour. 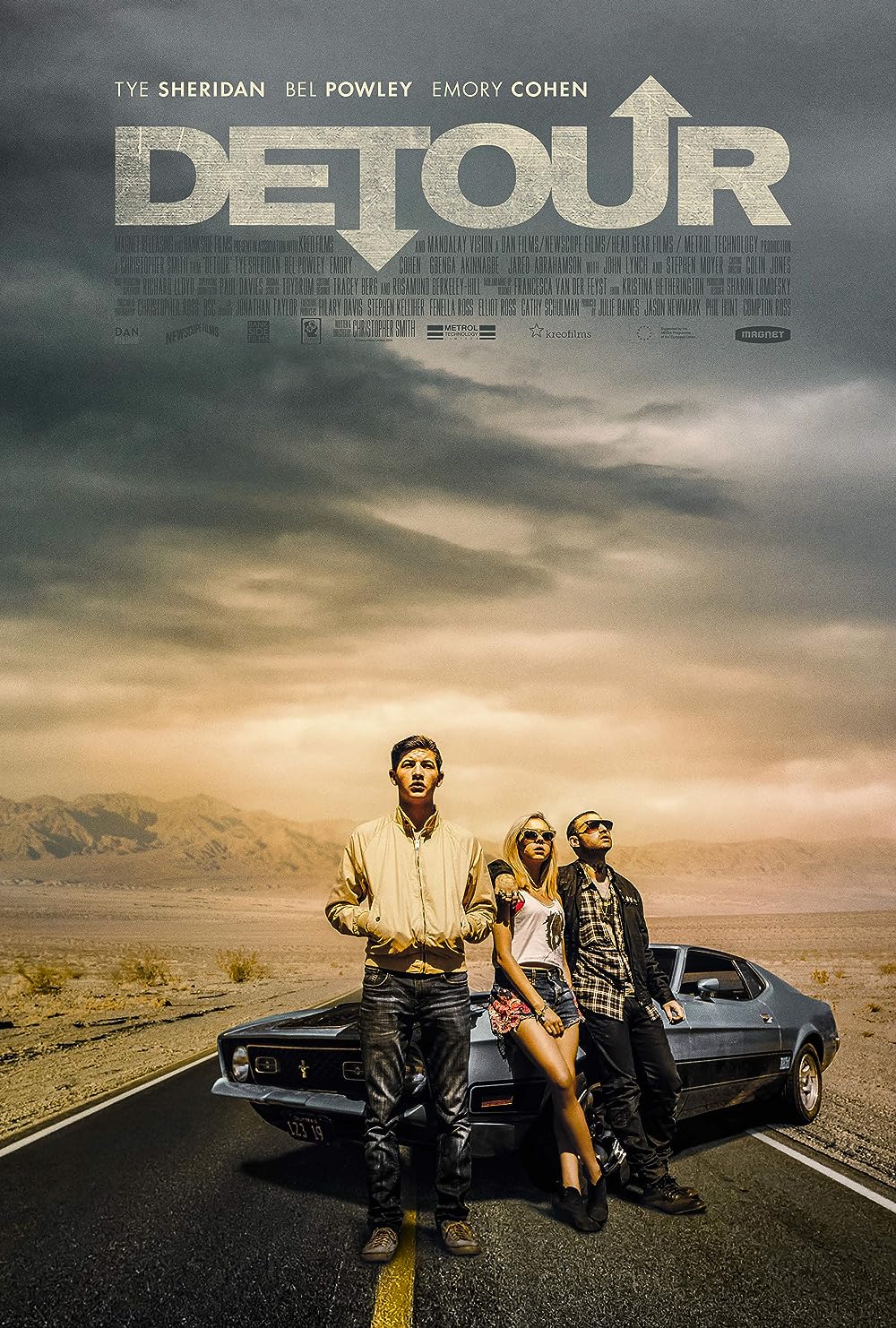 Detour: Directed by Christopher Smith. With Tye Sheridan, Bel Powley, Emory Cohen, John Lynch. A young law student blindly enters into a pact with a hoodlum who offers to kill his stepfather - a man he feels is responsible for the accident that sent...

He’s great in that and it gives him the opportunity to do something other than mope his way through a movie.

One thing that strikes me about these blatant Lords of the Flies homages is that they come across as so cloyingly “young adult” to me.

Gotta get that tween/YA demo! Here are some sexy shenanigans aboard a space cruise ship, but not really, so mom can watch with you!

No John Erik Hexxum, no Voyagers