The Zachtronics Solitaire Collection comes out today as well, and along with Circus Electrique they will conquer my wallet! Both are actually pretty cheap, so it’s not any huge damage, but still. ;)

Lots of intriguing names out this week, though I have no idea if they are actual wallet threats for people or not. Game Pass gets a couple of entries that I’m looking forward to trying, like You Suck at Parking and Metal Hellslinger. Other intriguing games this week include The Wandering Village (how does a Village wander?), Blind Fate, Wayward Strand, Dystopian Army Builder, and Hidden Through Time.

how does a Village wander?

it is built on the back of a dragon, silly.

And what I’m sure is the long awaited sequel to Betrayal at Kondor comes out, judging from the name.

I was variously excited, confused, and eventually amused at this. So you’ve earned a mild fist shake followed by an appreciative chuckle.

Disney Dreamlight Valley…I have no idea what it is.

There’s got to be a thread by now, but it seems to be Disney’s attempt at an Animal Crossing. In other words, Absolute, Utter, and Unmitigated Hell On Earth. I don’t doubt some folks on the forum are writhing in the unholy flames as I type these words. I will pray for their gaming souls.

The Wandering Village (how does a Village wander?)

I liked @Misguided’s reply, but wandering villages are small potatoes these days. Here’s an eight-miniute clip of cities having a car chase! 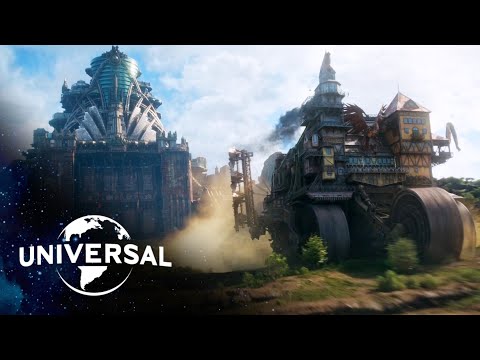 If that wasn’t from Peter Jackson, I would have totally watched that movie about Cities chasing each other!

I’m so disappointed: I expected that clip to be from a game ;(

Oh good! It wasn’t just me.

Freedom Planet 2 comes out tomorrow. The first one was very good, almost great, and a friend worked on the game.

I’m not sure what to think of this week’s releases. Maybe others can help me out here. Any wallet threats for you this week? I know I’m looking forward to a few Game Pass releases this week, like Deathloop, and the surprise entries last week, like Ni No Kuni Remastered.

Like the new Monkey Island. I assumed since I played through Monkey Island 3 and didn’t find it very funny or entertaining (I played it as a favor to a friend who is a big fan of the series, who insisted I had to play through it, I would love it), that older and newer Monkey Island games, including the one coming today, aren’t for me? Pretty safe assumption, I was thinking.

There we go, that’s my first real wallet threat in quite some time. Would also be Shipbreaker and Deathloop but, you know, Game Pass.

Nothing for me this week - I don’t have much spare money for games for a while, and have too much on my plate to focus on new releases anyway - but The DioField Chronicle and Slime Rancher 2 are very real wallet threats.

Serial Cleaner is one of those “better than they should be” low poly games that does a lot with a little, mainly by leaning into traditional game ideas (each mission is a level, with guards and patterns and orders of operations, ect). It also not only had a rockin soundtrack but kind of eluded to the big dichotomy of 70s cinema, hot girl horror serial murders vs mob hit murders, and the discomfort today about the former but not the latter.

So I had no idea there was a sequel! Looking forward to see what they come up with there.

I never heard of Serial Cleaners until now and checked out the Steam page. It certainly looks interesting, and I love the art style. Wishlisted.

I’m watching the sentiment on The Diofield Chronicle, and I may grab it if everyone’s in love; if it’s more of a medium response, I’ll wait for a more convenient (and cheaper) time. As far as what it seems to be doing, though, it’s pretty up my alley, so I’m at least cautiously optimistic.

Monkey Island and Train Life already attacked my wallet, so red I guess. Contemplating buying Construction Simulator but I doubt it.

Oh cool, Construction Simulator features Excavators! I should look into that.

Strangely, after my wildly positive experience with Animal Crossing: New Horizons, Wylde Flowers caught my eye as it was heading for mobile release and I’ve kept up with it. Now it’s a planned release tomorrow on Steam:

I’ll see how it hits, but I think it’d be fun to have a cozy game on the PC for a change of pace when other games have worn me down.

I played Wylde Flowers from start to finish on iOS (Apple Arcade) and loved it. It very much has the feel of a Hallmark TV movie (with a healthy dose of Harry Potter), but it executes on that really well. The characters are tropey though still well-written and in the gameplay department it does the Stardew thing as well as I’ve seen, excepting Stardew itself. Hope you like it!

Ok, first let’s get to the minimal wallet threats thanks to Game Pass giving us access to new games for very little money: Moonscars, Grounded 1.0, Let’s Build a Zoo, Valheim and some kind of Paw Patrol racing game. Now let’s get to why it’s personally Wallet Threat Level RED this week for me: the last EA Sports FIFA game comes out this week. It will have the normal club football that I don’t really care about anymore, and also the World Cup that’s going to happen in November, which I VERY much care about. They will have all the new stadiums in Qatar, and all the international teams, and I get to play it before the actual tournament? Yes please! But man, that’s expensive.

Any other wallet threats for people this week? If I missed anything or got something wrong, let me know.

Those are the big ones for me. I’m also curious about Moonbreaker, but no idea how good that one will be.

Also, this week has pretty extensive updates for Pathfinder: Wrath of the Righteous and Monster Hunter Rise: Sunbreak. A good week if you have those games.