I mean, they were groundbreaking back in the day, but are crazy outdated. Hell, they were outdated by 2000. It’d be like Blizzard remastering Warcraft 1.

I never cared much for the C&C games, and with Petroglyph being the developer I’ll wait to hear how it is received.

C&C 1 was atmospherically and aesthetically amazing more than anything else. The little animations were amazing. The install screen, the cutscenes, and especially the music. Interface wise, I still remember how mindblowing the drag and select felt, back when the only comparisons were Dune 2 and Warcraft 1’s godawful clunky selection.

But the actual mechanics as an RTS? The unit balance? guh

Same thing with Red Alert 1. More amazing music, plus the fun of working for hammy Stalin! But the mechanics were also atrocious, even a step back from C&C.

The sequels were awful to middling even at the time. C&C got worse and less fun with each game. Red Alert technically got better with each sequel, but were still way behind the competition.

I thought Tiberium Sun was amazing in terms of atmosphere (and I’d argue it was the peak of the series). Balance, yeah, it was a mess, but most people only play single player, and it was great at that.

For single player, nothing touched the original for me. It was this crazy Tom Clancy meets David Lynch setup and you kept wanting to see where the techno-weirdness would go.

The sequels turned it all into generic Sci-Fi channel original movies.

(what I remembered from the multiplayer skirmishes in Tiberian Sun was that it was technically balanced, in that both sides were stuck in a constant stalemate. It was just impossible to attack a base. NOD would get annihilated by orca bombers the instant they left their base, and GDI attacks would get wiped out by entrenched NOD artillery)

Blizzard has a guy doing something with the game:

Blizzard has outlined some of its plans for the iffy remake.

It’s working away on the first balance patch, which will be hitting the PTR this week.

“Each of our balance patches will aim to ensure competitive integrity at the professional level while providing a variety of different strategies for new and returning players of all skill levels,” says Blizzard. Expect the patch notes soon.

A number of features from the original game didn’t make it into Reforged, but Blizzard’s still planning on reintroducing things like clans, ranked ladders and custom campaigns. There are no dates attached to any of them, unfortunately, but Blizzard is ready to start discussing the game’s future direction.

The developer update also details the ongoing changes Blizzard’s been making to matchmaking. Because Reforged uses global matchmaking, latency has become an issue. Some players have been pretty vocal about their desire to get rid of it entirely, but it looks like it’s not going anywhere. Instead, Blizzard’s been rolling out server updates and claims it’s reduced high-latency games by more than 60 percent since May 4.

It does still feel like a lot of work needs to be done to even get Reforged up to the quality of the original, but the upcoming balance patch apparently comes with a “bevy of updates.” We’ll find out exactly what they are this week.

I’m gonna get out in front of this and call this the “When I piss my pants it freezes on the ground because my piss is cold like my heart” update. It may not make for a catchy acronym…WIPMPIFOTGBMPICLMHU hmmm. I’ll work on it.

This article was mentioned in The serious business of making games thread with regards to Vicarious Visions being integrated into Blizzard, but Jason Schreier also has new details about the failure of Warcraft III: Reforged and the fate of its development team:

Until last year, the Diablo II remake was set to be developed by Blizzard’s Team 1, part of the company’s Irvine, California, campus that had become known for reworking classic games. Its most recent release, in January 2020, was a remake called Warcraft III: Reforged. The title was poorly received due to glitches and missing features, earning 59 out of 100 points on the review aggregator Metacritic — the lowest score a Blizzard game has ever gotten.

Members of Team 1 met to discuss what had gone wrong. Internal Blizzard documents reviewed by Bloomberg pinpointed the game’s failures on poor planning, miscommunication and a rushed release due to financial pressure from management, among other factors. For example, Blizzard announced the game in November 2018 and began taking pre-orders for 2019 without informing most of the development team beforehand, according to several people who worked on Warcraft III: Reforged.

Team 1 wanted to avoid repeating the mistakes of Warcraft III: Reforged on its next project, the remake of Diablo II. Shortly after the postmortem, however, Blizzard pulled that project from the team and put the division behind Diablo IV in charge. A group at Vicarious Visions is also working on the remake, which was known as Diablo II: Resurrected.

On Oct. 15, 2020, Blizzard informed members of Team 1 that it was reorganizing the entire division, according to the people who worked on Warcraft III: Reforged. In the following weeks, members of the team were given opportunities to interview for jobs elsewhere within Blizzard. Those who did not find positions in the company were gradually cut. Others left for independent studios recently started by high-profile company veterans, such as Frost Giant Inc. and DreamHaven Inc., started by Blizzard co-founder and former Chief Executive Officer Mike Morhaime, whose departure widely signaled the beginning of Activision’s takeover.

Blizzard has promised to continue fixing and updating Warcraft III: Reforged, although it will likely do it with a different outsourced team. A spokesperson wouldn’t confirm who is handling continued development of Warcraft III: Reforged but said “we are still committed to updates in support of the community.”

Blizzard has promised to continue fixing and updating Warcraft III: Reforged, although it will likely do it with a different outsourced team. A spokesperson wouldn’t confirm who is handling continued development of Warcraft III: Reforged but said “we are still committed to updates in support of the community.”

That’s great, but the issue remains that they replaced the good version of WarCraft 3 with this crappy one.

Also, the whole article is telling me to basically stay the F away from the Diablo 2 HD remake.

Also, the whole article is telling me to basically stay the F away from the Diablo 2 HD remake.

I’ve seen people expressing relief with regards to the Diablo II remake after reading this article, because it’s now being developed by Vicarious Visions (who made the excellent Crash Bandicoot and Tony Hawk Pro Skater remasters) and not the Classic Games team that made Reforged.

I have no problem with VV. I think they did a great job with the Tony Hawk remake. I have zero faith in Activision/Blizzard to allow VV to take their time.

Kids today will never know what it’s like to live in a world where the Blizzard name meant more than cash grab.

The old timers who loved Blizzard from the early days were already leaving by 2014 when I moved on. Nothing lasts forever sadly. This encapsulates my feelings nicely… 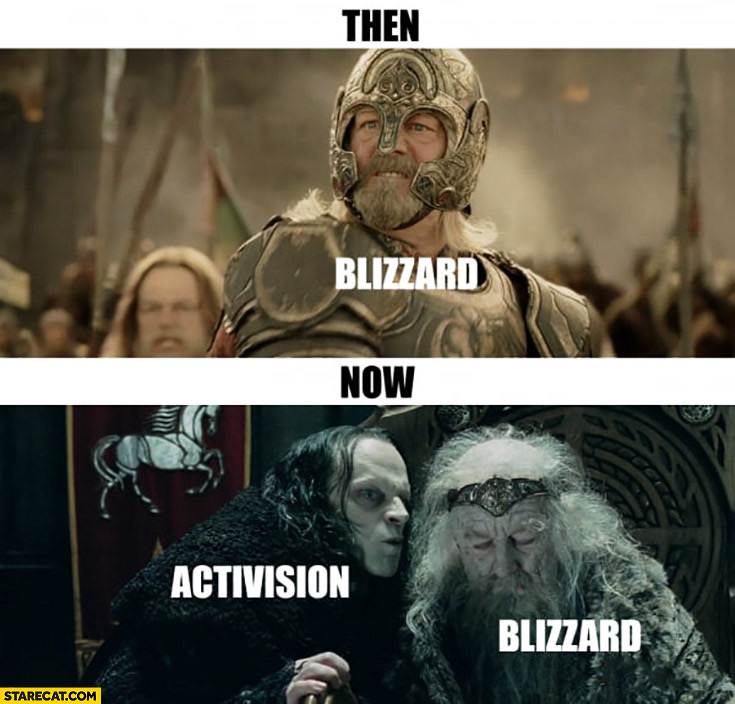 Today is the first I’d seen confirmation of a Diablo 2 Remaster, and honestly I’m really excited about the idea of it. Hopefully it turns out well!

is it confirmed? the article I read sort of positioned it as still a rumour.

A group at Vicarious Visions is also working on the remake, which was known as Diablo II: Resurrected.

I mean, I’m just going by the stuff posted in this thread. /shrug

If you mean has it been confirmed in a press release by Activision/Blizzard? Then no, it hasn’t. If you’re asking if Jason Schreier’s insider information has always turned out to be correct in the past because he has real contacts inside those companies, then yes it has.

If you’re asking if Jason Schreier’s insider information has always turned out to be correct in the past because he has real contacts inside those companies, then yes it has.

Let’s maybe tap the brakes on throwing out a word like “always” when it comes to being right and journalists. Even good to great journalists sometimes get a story wrong.

UPDATE: Blizzard disputes that a Diablo 4 announcement was pulled from BlizzCon. I can confirm that the Allen Adham video was made, and that D4 is in development. What's in dispute here is the planned timing. I apologize for any misinformation: kotaku.com/sources-blizza… https://t.co/zML9sQgkSn 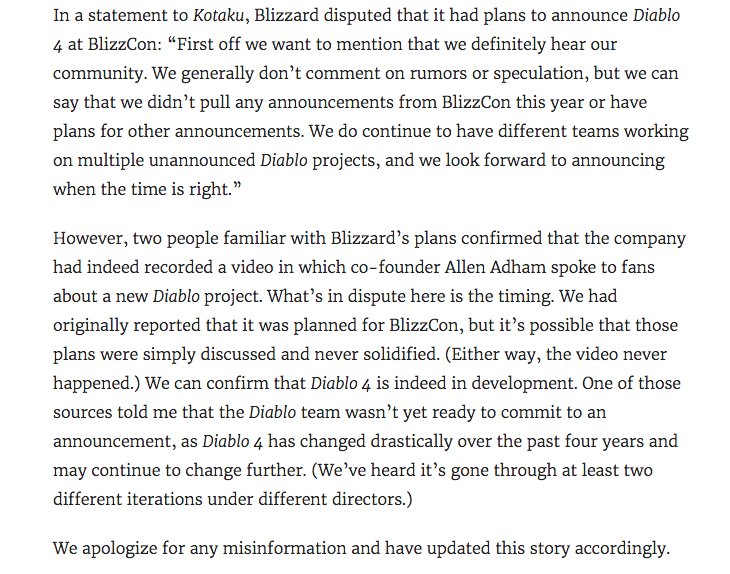 (In the case of Diablo 2 getting a remake of some sort – I think that’s right on the money.)