I’m not sure why a game like this needs such extensive backstory choices, but I get to have a Yorkshire accent, so that’s OK.

Sorry, this is a giant thread, and I’m coming in without knowing anything. Is this worth downloading on Game Pass for single player? Or is it like Vermintide, where it’s really built for coop and not fun in single player?

The latter. In fact they have made it more online than before. You need to enter an online public lobby at the start, and if their servers are full you get in a queue. (You are in third person in that lobby, like in Destiny 2, to promove the use of paid cosmetics)
And from what I have read, you can’t choose to play with bots if you want, they only appear if there are not enough people to play with.

I thought that was a pretty weird fit as well.

I started the game. It looks very nice!
I played the prologue. And then I had my first crash, on the basic training mission on the VR thingie. Yayy…

This game…
I could play 3 missions without issue. I have to say, the combat is even better than in VT2.

But in another mission I had a second crash, 10 minutes in.
Then upon trying to open the game again to connect to the same mission (if it was possible), it crashed and my computer rebooted O_o
And then I tried game, and I had a crash when clicking on a mission icon on the mission selector??

The loot acquisition in this game is fucking terrible. I wait an hour for the next store refresh and it serves up 7 dueling swords (out of 10 items, I think?). On top of that, I’ve only ever seen one voidstrike or surge staff my entire time playing the game (I’m L17 now). All I get are claw and dueling swords and various guns.

It’s extremely frustrating since those staves kind of define how my psyker plays. I am fine with chasing a staff with a particular set of stats I’m interesting in but not even being able to have one available is seriously getting on my nerves at this point.

This is what I get, refresh after refresh. 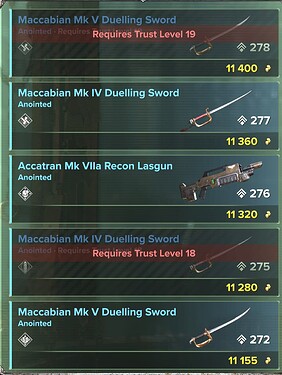 And a sample of the next refresh: 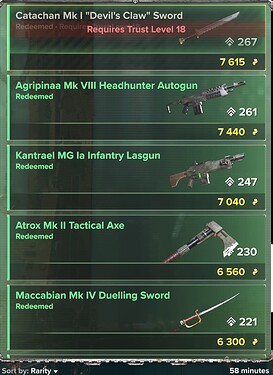 I’m angry i have a little over two hours in this thing, so i can’t return it, because it just ain’t finished. Not to mention it reeks of Tencent (forced early release, complete with a custom currency that you have to buy in set amounts) F2P predatory bullshit.