It did look like they brought the LOS tool over from SD which is a nice improvement.

The AI seems to be better than previous games. In my last game all of my M1 Abrams tanks were destroyed with infantry RPGs. Gotta remember to clear out forests before charging with tanks!

Warning Orders are WNGO here in Australia - I do agree that WARNO just sounds, odd

The latest patch toned down the tank speed and increased the strength of AA. Played a game during lunch today and it felt much better. The AI is actually pretty damn good (especially compared to past Eugen games).

I’ve been watching a VulcanHDGaming commentary on a tournament match of WARNO and he keeps on talking about tank “health”. I was under the impression that in Steel Divisions the tanks didn’t have health. They had different system damage they could take (such as their tracks being knocked off, engine destroyed, or individual crew members knocked out), but not some sort of health bar. Is WARNO moving to a more unrealistic hit points/health bar system? 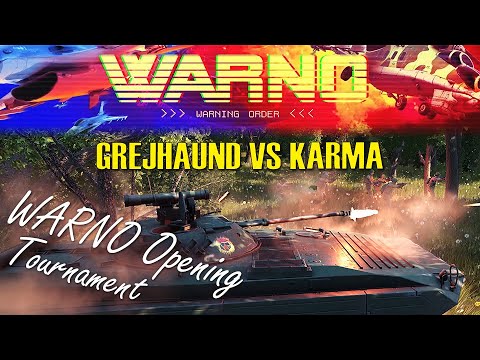 It’s a common misconception that vehicles in SD don’t have hit points, but they actually do. The main difference between an SD-style system and a Wargame-style system (the latter of which is what WARNO uses) is that SD has fixed amount of damage per hit with a penetration chance dicating whether that damage is dealt or completely invalidated, and WARNO has a varying amount of damage depending on the weapon versus the armor in question without the random die roll of penetration dictating if any damage is done at all.

In Steel Division, the health system is largely under-the-hood and doesn’t come into play in many situations as damage values generally outstrip entire vehicle health pools, but it is very definitely still there. The Wargame/WARNO system is far more transparent about it and generally gives units a greater chance of surviving any given engagement with a chance to retreat, repair and fight again later.

All these games look the exact same. I know there are differences but I couldn’t tell you what they were just by watching that video.

Bought WARNO yesterday on Staeam sale and because I like Wargame, SD and SD2. I come into these games as more of a wargamer/simulation than a RTS/multiplayer focus. My impressions so far

Bug: I created a single player skirmish. Playbe for a bit then needed to do a chore so I saved and exited. When I came back it told me I would loose in XX seconds as I had lost control of my entry areas. I had not. They were the captured color and my command posts were still sitting there. So I decided to move my CP, and lo and behold my problem ended. But then I saw AI enemy would loose for same reason. I was no where near his entry areas, so clearly a bug. ended my game prematurely.

Vehicle damage: I caught a enemy T80 in the open with flanking fire from 2x Abrams and a Bradley. I saw his hit points decreasing but he did not die despite repeated hits to the flank (he never stopped and turned to engage, only kept driving on a crossing route over the middle). Earlier I got another T80 in the open and hit him repeatedly: he didn’t die but the crew bailed. Either I had very bad luck, T80s are made of vibranium, or I do not like the current system. Probably option 3.

Related to the above: In WARNO, you can see far more deeply into woods and cities. Also the optics on vehicles seems alot better. A passing Russian APC spotted a scout I had hiding in a building. Scout did not fire(I had him holding fire), so APC simply spotted him.

After playing SD and SD2, the old Wargame system of needing a CP to “capture” a zone seems gamey. Again in real life, command posts stay close to the front but not right on the front like the zone capture system pushes. I’m fine with using capture zones over a floating frontline, but I’m no longer a fan of using the CPs as the “capture” mechanic.

The bug i reported above has not returned.

All other concerns remain.

New concern: Everything moves too fast. Someone did some tests and vehicles are moving at like 3.5x what they should be. Infantry too. I caught a tank driving in the open with a ATGM. The tank was going so fast he drove probably 1200m down the road eventually out of sight before my MISSLE got to him. Lots of debate on the forums about to focus on RTS gaming or more realism.

Everything moves too fast.

That’s always been my issues with their games.

They added 2 German divisions and a bunch more unit types. Very fun. Its still buggy, like one of the new vehicles is a APC with a mortar, but the mortar will not fire .

They added 2 German divisions and a bunch more unit types. Very fun. Its still buggy, like one of the new vehicles is a APC with a mortar, but the mortar will not fire .

I will say I have taken more than small joy in smashing Russian tanks in this game lately.

New patch fixed the borked mortars and more. The biggest change is the AI seems to be better.

Before the patch the AI did not seem to know how to play the Capture points, but now they do. Any maybe they are getting better at combined arms.

I was playing as the East Germans against the US (played by AI). It was a 3vs3, so I had 2 AI teammates. I had decided to make an aggressive initial move to seize a key central command point with a combined arms group using basically all my initial spending points. I had a top tier tank (T-80 varient) escorting several BMPs with infantry, a Mi-24 Hind flying cover plus anti-air defense. I had recon up front too.

The AI hit me like Mike Tyson :“Everybody has a plan until they get punched in the mouth”. Multiple Abrams made short work of my vehicles while Stingers got my Hind. I fell back with mere remnants of my force and cobbled together a ambush that checked their advance right at my starting location. From there I slowly pushed them back in what was a overall very challenging game.

Not saying the AI is perfect, but it has gotten better at putting together task forces. However the AI is still too willing to drive headlong into an ambush, and it rarely disembarks its infantry early enough.

Well that’s good to hear. I’ll definitely be dropping back in when Bessières Update comes out with British and French, but I might fire it up again sooner.

Looks like the Steam reviews have gotten pretty decent now — 84% in the last 30 days, up from 79% overall.

There’s apparently a replay feature in the game. Did that exist in their previous games?

Previous games very definitely had replays. Couldn’t swear to you off the top of my head that they were in European Escalation, but definitely in every game since (and pretty sure EE had them too).

What’s the state of the game right now? I never buy stuff in EA, but dang I am so wanting a game like this right now.

They are constantly tweaking units, sometimes pretty significantly. And they are still adding units. This leads to you needing to rethink your decks and your strategies.

For example they recently made some significant changes in the interaction between aircraft and AA, and they also recently added airborne units.

All said I am enjoying it alot.

Can you zoom in to ground level and feel like you’re part of the action?