Warsaw: A Tactical RPG for PC, PS4, and Switch

Set during World War 2, gaming company and Pixelated Milk’s WARSAW is a beautifully hand-painted tactical role-playing game set in the Nazi-invaded Central European capital city of the same name. Featuring a group of characters coming from all walks of life gathering together to rise up against their oppressor, WARSAW will be arriving in Q3 2019 on Windows, PlayStation 4, and Nintendo Switch.

Developed by the talented team at Pixelated Milk, alongside efforts from publisher gaming company over the past 15 months, WARSAW brings to light Poland’s historic 1944 uprising providing an immersive experience of tactical urban warfare. Setting the tone of love, friendship, loyalty, and the invariable struggle against overwhelming odds the haunting teaser trailer, created by animation studio Human Ark with a song performed by acclaimed Polish singer, Brodka is a chilling early look at what’s in store for WARSAW .

That’s what I thought when I saw this screenshot: 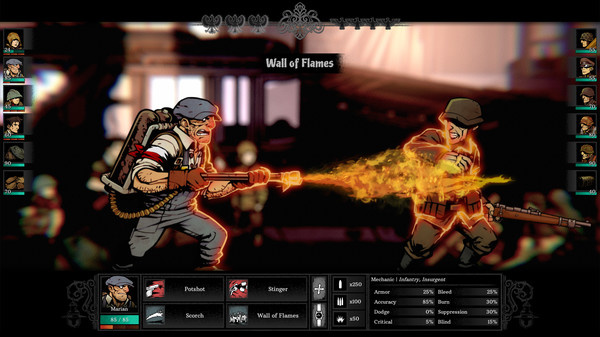 I’m unsure it’s the correct setting for a Darkest dungeon clone, but I’m willing to be proven wrong.

I tend to shy away from games with heavy war themes, but the trailer is beautiful. Still, the way they did the logo…I expect there to be mechs that inexplicably all use circular blades of various forms.

I tend to shy away from games with heavy war themes, but the trailer is beautiful. Still, the way they did the logo…I expect there to be mechs that inexplicably all use circular blades of various forms.

Let’s not be too jaded and judgy. It’s a known fact that the Germans used Mecha with circular blades and lasers to put down the Warsaw Uprising. Who’s to say that the resistance couldn’t have captured a few? Wajda captured this in his groundbreaking film Kanal (though he never quite explained how the Resistance managed to replenish the anti-matter pods given to the Nazis by the Alpha Centaurans, but hey, artistic license). I think we should cut the designers some slack.

Have I mentioned this forum needs likes?

Not too far off.

I’m expecting the first half of the game to be great… at least up until the Panzerkleins.

This game is currently free on Twitch Prime. Is it any good?