OK who here has good strategies for weight loss? Lets say you want to lose 30 pounds or so before summer, obviously fad diets and stupid fen-fen is out. Any recommendations? What has worked for everyone here to safely but effectively shed? I’m looking for something more thought provoking than “eat less and workout”, as in maybe how you planned and attacked the problem, how you motivated yourself, etc. Thanks.

Ohhh, so you want suggestions other than what actually works.

You gain weight because of eating-habits and genetics. Life is unfair, and if you’re not blessed with the eat-3000-calories-per-day-and-only-gain-1-pound-a-year-even-if-you-don’t-exercise gene, you can’t eat like they do.

If your goal is to lose 30 pounds, any of the fad diets will work.

If your goal is to lose 30 pounds and not gain them back, you have to make a permanent life style change. There are no shortcuts. Even the “stomach stapling” operation requires the receipients to change their dietary behavior forever. 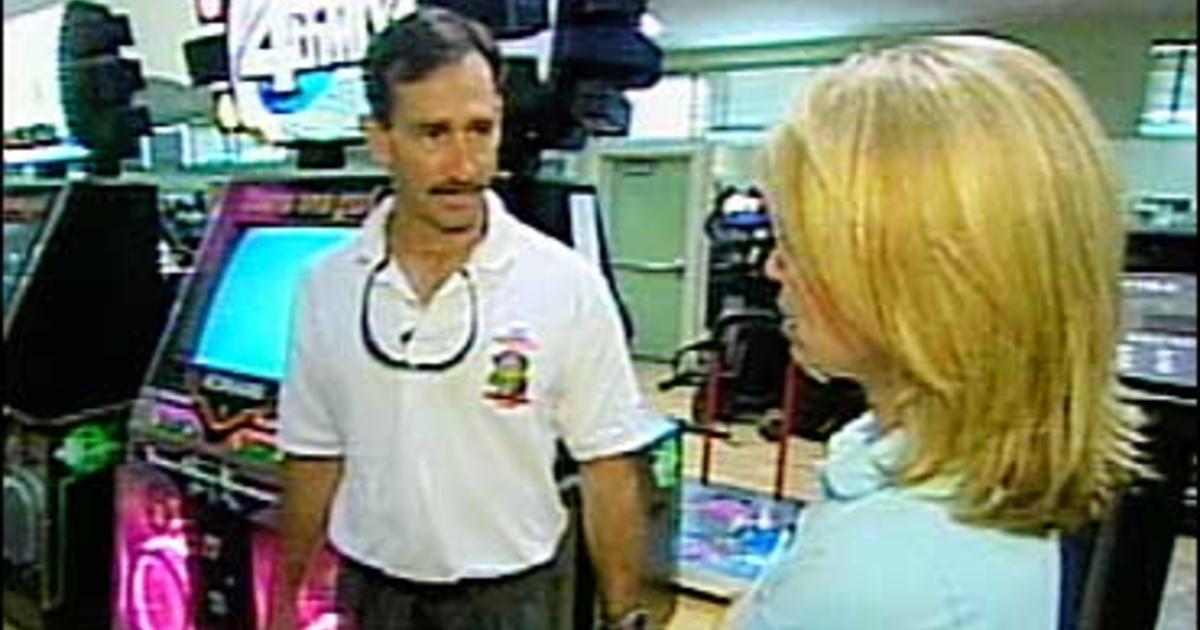 Video Game That's Good For You

Chase A Ball? Run And Jump? Not Any More

Here’s an article I can only find through the Google cache, so I’ll quote it in its entirety. From the NY Times Magazine:

The Video-Game Workout
By JAIME WOLFE

A defining characteristic of video games has long been their high couch-potato quotient. The only exercise a person could expect to get punching buttons and moving a joystick was the kind of wrist workout that put them at risk for repetitive stress injury. Playing the video game called Dance Dance Revolution, however, is nothing less than a full-body aerobic activity.

Dance Dance Revolution – D.D.R. to the avid teenage throngs who crowd the arcades to play it – is a Japanese innovation that is just now catching on in America. Like a jukebox equipped to judge your dancing prowess, D.D.R. asks players to choose from a selection of booming, beat-heavy dance-club numbers; the players are awarded points for their ability to perform the high-speed techno-tap-dance routine that D.D.R. dictates, step by step, on screen.

Players stand facing the screen on a platform divided into six-inch squares. Then, following the instructions displayed on-screen, the player must start stepping on appropriate squares. Because the steps are coordinated with the beat of the music, a successful player begins very quickly to look like an accomplished disco dancer. As players complete various steps, the machine calls out encouragement like ‘‘Wow! You are too cool!’’ and ‘‘Oh, no! You’re dangerous!’’

The nature of the game also makes D.D.R. a spectator sport: crowds gather around not to watch what’s on-screen but to see players show off their moves. And because girls tend to be socialized to become better dancers at an earlier age than boys, D.D.R. is one of the first video games since Pac-Man to attract female players in large numbers.

According to the popular Web site ddrfreak.com, there are more than 500 D.D.R. machines in the U.S.; those in New York include one recently installed in the P.S. 1 museum in Queens. Konami, the game’s manufacturer, also makes a version of the game called Para Para Paradise, in which players use tai chi-like arm movements to explode objects on-screen.

Playing D.D.R. is, it turns out, part of a healthy lifestyle. Fanatic players report often-significant weight loss resulting from the workout it provides; imagine a Stairmaster powered by quarters. The ddrfreak.com site even includes a page of tips for nonathletic types on how to reduce injury and strain when playing D.D.R. For the past several years, exercise machines have incorporated an increasing number of video-game elements. Now the arcade has begun to reach out in the other direction.

I always like to start with a post to Q23. After that, I try to eat less and workout.

Ok, ballbusting aside, I have found that brushing my teeth early in the evening helps keep me from late night snacking. Cutting out late night snacking is crucial to my weight loss plans. Also, drinking lots of water in the evening helps, but that much water late at night has obvious draw backs. But I have to agree with Ty. The only thing that really works is eat less & work out.

Something more thought provoking than “eat less and workout”

Try reading a book while you eat less and workout.

Other than that I’m whole heartedly surprised to find that someone else uses my ‘toothbrush’ thing. How do I accuse Tim of being a scanner?

Barfight, broken jaw, and finally 2 months of your teeth being wired together.

True, true. Rarely do you see a fat junky.

Barfight, broken jaw, and finally 2 months of your teeth being wired together.[/quote]

Fad diet. Just do the Atkins meat thing and save the medical bill. ;)

Barfight, broken jaw, and finally 2 months of your teeth being wired together.[/quote]

Fad diet. Just do the Atkins meat thing and save the medical bill. ;)[/quote]

Sue for medical expenses, of course. The bar, the other guy, and the brewery.

Left out one thing: You must be drinking Michelob Ultra Light -> Lowest carbs of any beer and closest to drinking piss of any beer.

Reading this section of the Feb. 2003 Computer Games magazine about “They Came From Hollywood” (eg, Sparky’s game) made me actually get out of bed to post it:

And while it initially seemed like a joke, they are really supporting the PC Dance Pad, with a simplified interface and focus on action elements as you jump, stomp, kick, and smash the mat. “It will also make you look really, really silly” notes Sparky.

Oddly enough, this ties into two posts I’ve made tonight: one about Bub’s ill-fated review of Britney’s Dance Beat, and the above passage on how to lose weight through DDR.

Along those lines, eat a big lunch, small dinner. Get off your ass, go for a walk etc. Or my favorite, develop a nervous twitch or leg bounce.

If you want fast weight loss in a short amount of time, check out the Atkins Diet. I’ve been on it for 3 weeks and have lost 16 lbs. Of course, cutting out all sodas and soft drinks and exclusively drinking water as a beverage as part of it has probably cut a good 800 calories a day out of my diet. It’s a tough diet though; regardless of what you may hear about eating all the grease and meat and fat you want, it’s definitely not like that.

In a nutshell, you cut your carbohydrate intake a day to <20 grams/day. That means no breads, grains, rice, cereals, most vegetables, or fruits. You eat meat, low-carb veggies like lettuce, spinach, and broccoli, and take lots of vitamin supplements to replace what nutrients you miss from fruits and the like.

Overall, I’ve followed it rigorously so far, and have found the greatest craving on it to be potatoes/fries and sweets. No carbs pretty much means no dessert, although I’ve sated this by relying on Atkins low-carb (2 net grams a package) chocolate peanut-butter-cups when I get a serious jonesing for sweets.

Some of the best foods I’ve found to eat that conform to this diet are chicken caesar salads (as long as the caesar dressing is a kind not loaded with carbs; most aren’t too bad), salmon steaks, roast or fried chicken (no breading though), cold cuts (turkey or ham are good), most cheeses, and most lean meats.

Trying to establish a new body weight is like trying to quit cigarettes. There are some people who can adjust to their new lifestyle overnight and not fuss about it. Other people will go through their whole lives starting and stopping repeatedly, complaining about their situation.

It’s a tough diet though; regardless of what you may hear about eating all the grease and meat and fat you want, it’s definitely not like that.

Could you elaborate on this part? I’ve read things by Atkins which seem to claim you can eat as much bacon and burger as you want, then read other portions which suggest turkey sausage and other lean meats.

What is the official stance on this part of the diet? Is there a limit to how much meat you’re supposed to eat per day?

If you try to lose weight with magic tricks (temporary starvation through dieting, weight loss pills, etc.) you’ll gain even more weight back when you stop. Temporary dieting triggers your body’s evolutionary response to put on more weight for the next “famine” that comes along.

The Atkins diet works in the short run because cutting out all the carbs reduces your calorie intake; it’s the functional equivalent of eating less. Of course, once you stop you gain it all right back, plus more.

An out-of-control rebound effect is how the truly ludicrous cases (1200 lb. people) occur; it’s virtually impossible to get that big otherwise.

Such declarations lend our obsession with being thin a respectable medical justification. But are they accurate? A careful survey of medical literature reveals that the conventional wisdom about the health risks of fat is a grotesque distortion of a far more complicated story. Indeed, subject to exceptions for the most extreme cases, it’s not at all clear that being overweight is an independent health risk of any kind, let alone something that kills hundreds of thousands of Americans every year. While having a sedentary lifestyle or a lousy diet–both factors, of course, that can contribute to being overweight–do pose health risks, there’s virtually no evidence that being fat, in and of itself, is at all bad for you. In other words, while lifestyle is a good predictor of health, weight isn’t: A moderately active fat person is likely to be far healthier than someone who is svelte but sedentary. What’s worse, Americans’ (largely unsuccessful) efforts to make themselves thin through dieting and supplements are themselves a major cause of the ill health associated with being overweight–meaning that America’s war on fat is actually helping cause the very disease it is supposed to cure.

In summary: trying to “just lose 30 pounds” is a horrid idea. If you want your body to look different, you have to be serious about it.

Reading this section of the Feb. 2003 Computer Games magazine about “They Came From Hollywood” (eg, Sparky’s game) made me actually get out of bed to post it:

And while it initially seemed like a joke, they are really supporting the PC Dance Pad, with a simplified interface and focus on action elements as you jump, stomp, kick, and smash the mat. “It will also make you look really, really silly” notes Sparky.

If you try to lose weight with magic tricks (temporary starvation through dieting, weight loss pills, etc.) you’ll gain even more weight back when you stop.

Complete bullshit. That’s an urban myth spread by people who never were in the situation, or confuse short-term water loss with fat loss. I lost 20 kg (43 lbs) of fat by strict dieting over a period of three months, and never regained it (more than a year since). And I knew other seriously overweight persons who’d only lose weight once they started radical dieting, and the weight would stay down just fine.

When you don’t gain any weight now, while you’re overweight, then you won’t gain any weight when you resume your normal habits, after a diet or fasting. You only have to adjust your lifestyle enough to not gain weight anymore. Once you’ve done that a drastic diet (long enough to actually lose fat and not just water!) will help you lose weight fast and permanently.