So, I am in need of an excellent pair of soft-toed work boots. I spend all day on concrete which is often wet and muddy, so good traction and reasonable water resistance is a must (I understand that you can make pretty much any solid leather boot water-resistant with the right treatment, though, so I’m not too worried about that). I spend virtually all of my time on my feet standing, while also walking upwards of a few miles a day, so light-weight comfort is vital. I’m also underpaid, so durability is paramount. I came into this job with a brand new pair of Skechers hiking boots which lasted all of three months before the soles fell off; this is what I’m trying to avoid.

My price point is under $150. I could afford to spend more if I really wanted, but I don’t. And from what I’ve seen, it doesn’t appear as though that will be necessary anyway.

My top two choices at the moment are as follows: 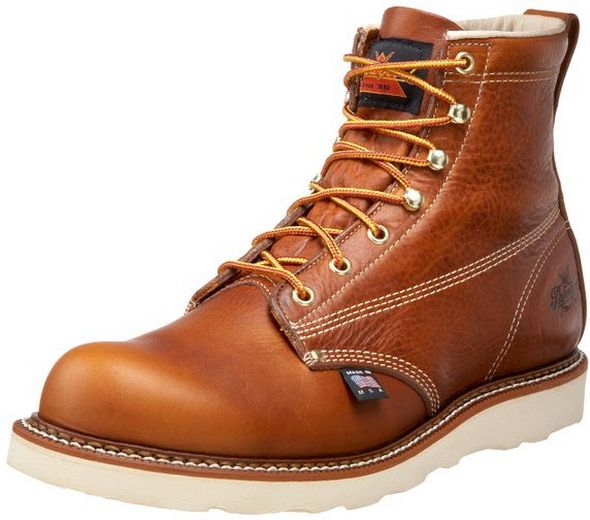 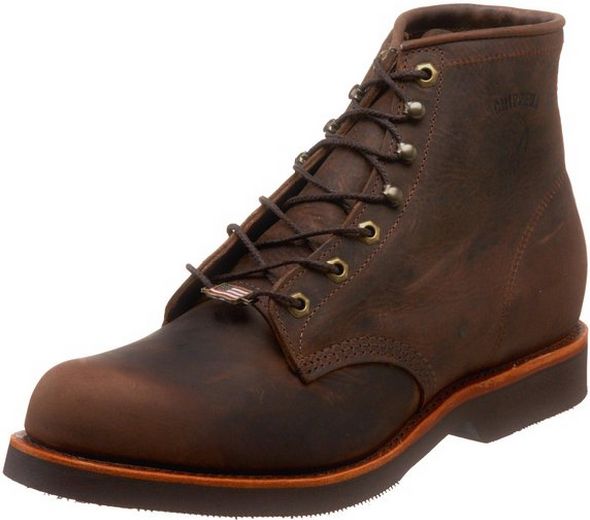 They both seem to be well reviewed around the Internet, with the Thorogoods appearing to be slightly more comfortable. Apparently they do not have a Vibram sole as pictured, though, but I’m not sure if that’s a big deal or not since I don’t know how good (or bad) the replacement is.

I have a price watch on camelcamelcamel for the Thorogoods since they appear to drop down about $40 every few months (and I’m hoping that cycle is coming up shortly).

Oh and while we’re on the subject of footwear, I want to put out a recommendation for People Socks which I’ve been wearing for the last few months. This is my first foray into the world of wool socks, and I absolutely love them.

Georgia boots are awesome. I love the slip on, low boot. I’ve had two pair myself, but these were popular when I worked in landscape construction too. Only ~80 dollars.

I’ve been very happy with a pair of Blundstones I bought a couple years ago for a light-duty hiking/yard/rain boot. Apparently some people have reported the build quality has decreased recently, but I haven’t had any issues with mine.

Well the Thorogoods just dropped about $20 so I bit on those as well as a jar of Sno-Seal. We’ll see how this goes. I expect the price to fall a bit more in the next day or two so I’ll try to keep an eye on it and have Amazon refund me the difference.

But then it wouldn’t make any sense!

This line made me chuckle. I can picture a bunch of contractors shaking their fists at Penny for leaving boot-prints in their still-wet concrete.

Never have worn a work boot in my life. Lots of hiking boots, though. But I’m sure either will work for…

People talking in movie shows,
People smoking in bed!
People voting Republican,
Give them a boot to the head! 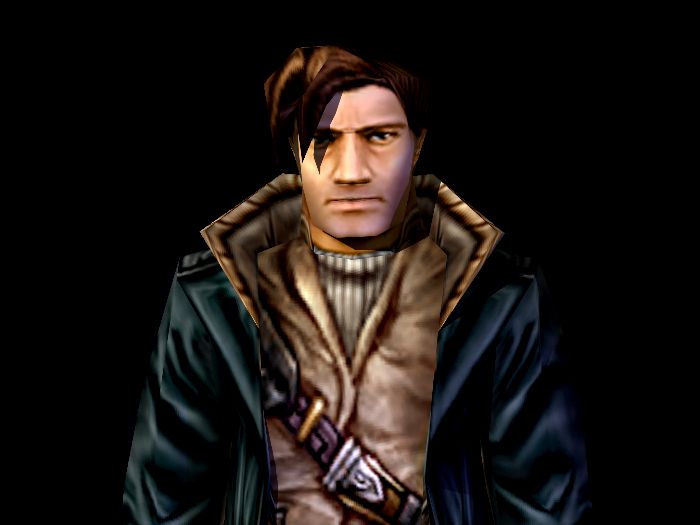 This line made me chuckle. I can picture a bunch of contractors shaking their fists at Penny for leaving boot-prints in their still-wet concrete.

Hey, maybe I’m not being paid to do this, and maybe nobody instructed me to do it in the first place, but a job is a job!

When I used to work in a steel mill we had to wear steel toed boots. The problem was when we caught on fire the steel in the boots would heat up big time. We used to wear the boots untied so we could kick them off in order to take our burning clothes off as fast as possible.

One of the problems was it is so hot you could not tell you were on fire until you smelled the smoke or heard your buddies yelling,“You are on fire!”, just like Tom & Jerry cartoon.

Take it from me being on fire will ruin your whole day ;)

We used to cook our lunch by putting it on the glass windows in our pulpit. I worked there for 13 years. With four kids you have to do what you have to do.

I grew up in a small town in Pennsylvania that had a steel plant. Bethlehem Steel. The bottom fell out of steel in the 70s and there were no jobs to be had by the time I got out of high school.

I remember playing at my friends house when I was a kid and his father got home from his job at the mill and he was covered in some black sooty something from head to toe. He had white skin around his eyes and I remember looking at him with shock and him looking back at me and blinking the eyes at the center of those big white holes in his face of black. Finally he walked into the house, and I asked my friend what had happened to him at the mill, and my friend was just like, “He always looks like that after work.”

When the ladle comes over from the furnace to the caster if it doesn’t open the steel pourer has to go underneath it and open it with a long copper hollow pipe that has oxygen being pumped through and is lit on one end. We used the flame to open the channel so the molten steel could flow into a tun dish.

Any of you ever see the movie Rudy and the scene where there is the explosion in the steel mill? That is the caster where the tun dish (which is like a funnel with 5 holes that sit above the molds). The steel flows through the 5 molds straight down and then it is cut by 5 auto torches.

The steel pourer is dangerous because if the steel in the ladle has a “hic cup” it can hit you as you work. One ounce of steel can burn right through your body. The explosion in Rudy hurt a mold operator (most explosions happen because molten steel and water do not mix - place molten steel on top of water and you have something very dangerous).

I also worked where the steel was cut by the auto torches and had all the jobs in that area the hardest being the First Torch who controlled everything. It was like being at war. This is where you would catch on fire because the hardening steel was about 1900 degrees (f). It was so hot on the floor around that steel you would just catch on fire when you had to go between the five strands to fix stuff.

Sometimes the strands would not cool enough so when the auto torch starts to cut the middle of the strand was still liquid and the steel would come shooting out. Then the auto torch would get damaged and we would have to manually cut ourselves sometimes for 12 hours. Men would pass out all the time.

I never understood what a flashback was that returning soldiers go through until I had this job. I have been out of this job for about 14 years and sometimes I find myself in the middle of a harrowing problem that I experienced in the auto torch section. My wife always knows when that happens and just gives me a shake.

By the way our mill produced 80% of all the steel used in the production of shock absorbers in the US so there is a good chance that everyone on QT3 has sat on steel springs that I helped make in all my years working there. :)

Wow, I think this the most I have ever written in a thread - sorry about the wall of text!t

No worries, GeeWhiz. It’s a cool (yet terrifying) thing to read about! Glad you’ve made it out of that field, but thanks for lighting yourself on fire regularly for the sake of the rest of us, heh :)

Be here all week, man. Try the veal, baby.

That is where my name comes from:

Gee Whiz! I wonder where all the smoke coming from! :D

I have boots in hand! Er…on feet, rather. They’re very comfy already and I’ve applied the Sno-Seal so water beads right off. I can’t wait to see how they perform “in the field” tomorrow. 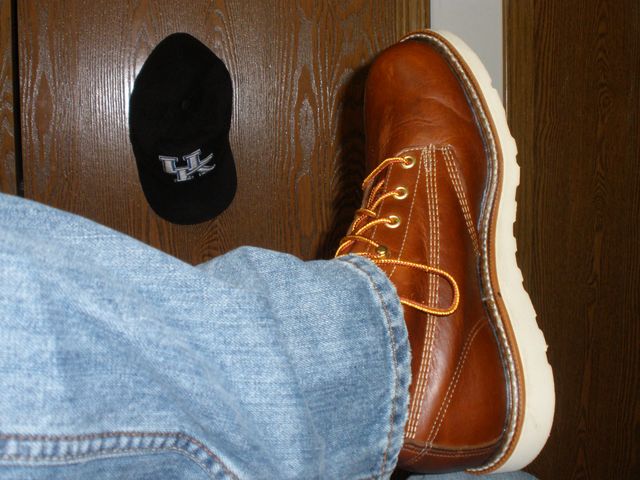 <a bunch of scary shit>

Man, and people think working with crocodiles is dangerous? At least they don’t make you spontaneously burst into flame!

By the way, my boot recommendation is Redback boots. They’re styled a little like Blundstones, but they’re quite a lot cheaper! They’re so comfortable that I basically wear them everywhere at all times, much to the chagrin of my wife who keeps trying to get me to buy something else. :) They also last for years, usually 4-5 years before they finally disintegrate, which given that they get regularly submerged in muddy swamp water is pretty good going.

Penny, you either have Godzilla-sized feet, or that’s a very small cap hanging in the background!