Apparently, all sorts of stuff has happened.

Three unrelated sources familiar with game development at LucasArts have all told us that development on the game has been frozen or put on hold since the Disney company’s November acquisition of Star Wars creator George Lucas’ media empire. That freeze has caused a game that was slated for a late 2013 release on next-gen platforms to potentially miss this year’s E3 and to slide into next year.

We’re told that the game was scaled back in 2010 after budgetary concerns put the TV show was put on hold. The game was re-written with a new story that was disconnected from the TV-show material. And this is where what our sources say gets even more interesting. LucasArts supposedly was set to reinvent itself in 2011 under then-studio-president Paul Meegan, attempting to make Star Wars-style games in popular genres. There would be a Star Wars riff on FarmVille and a Call of Duty-style first-person shooter codenamed Trigger. 1313 was switched from codename Underworld to codename Hive and given platforming elements, similar to Sony’s hit series Uncharted. A LucasArts rep declined to comment about any of this.

For weeks we’ve heard from multiple sources that the Disney purchase of LucasFilm (which includes LucasArts) has reoriented the company’s gaming division. The focus is on the new trilogy, not on material that is unrelated to the planned JJ Abrams-directed Star Wars: Episode VII. 1313’s developers may still be fervently plugging away, for all we know. As LucasArts says, the game “continues production.” But it sounds from our sources like it’s not currently moving forward in any official capacity.

More at the link. Sounds like we’ll be seeing another Aliens: Colonial Marines if it ever makes it out of production.

Quoted from the article:

The game was conceived in 2009, we’ve been told privately, as a tie-in to a planned live-action Star Wars TV show. The show was set to take place between the prequel Star Wars trilogy and the classic one, as was the game. The game was called Underworld, according to one of our sources, and was, like the show, going to be for an adult audience. The 1313 title, after all, refers to the seedy underworld on the planet Coruscant, where crime, violence, drugs and other seedier elements exist. That underworld would be the setting for the show and the game.

In what will surely drive fans of great Star Wars games a bit mad, Underworld/1313 was, we’re told, originally going to be an open-world role-playing game similar to the beloved BioWare title Knights of the Old Republic but with episodic character updates delivered regularly over DLC. Story arcs would go to some dark places, touching on terrorism, the dealings of crime families and prostitution.

I would much rather play that game than the Uncharted ripoff I saw in their unveiling video.

Of course it is. Why? Because LucasArts is one of the worst run game studios in existence. They literally cancel 3/4s of their projects after working on them for years.

Then you mix Disney Interactive into the equation, which also cancels about 3/4ths of it’s projects after years of working on them… and well, it’s like a match made in heaven.

The combined company can now easily cancel 6/4’s of their projects after they have been years in development!

Seriously though, after every major release that LucasArts actually manages to finish, they basically fire everyone, “change direction”, then staff up with entirely new people. This has happened at least four times. It’s also happened several times at Disney’s game division under it’s many names.

Concept stuff that shows some of the performance capturing.

So sad. I’ve always imagined the tension that must exist in the gaming industry given that graphics standards just keep escalating and every time a project is delayed means it will compare very badly to the current gen if it emerges late.

Jesse Harlin, the composer for Mafia 3, worked on Star Wars 1313.

Here’s a what-might’ve-been tidbit he dropped on PC Gamer:

[quote]
“There was this one time where Dominic Robilliard, who was the project lead on Star Wars 1313, said: ‘I’ve got this outdoor restaurant here, and I would love it if you did a Star Wars take on Massive Attack for what the customers are listening to’,” the ex-LucasArts turned freelance composer Jesse Harlin tells me. “And so I made it and it turned out really well.”

While the name may not be immediately familiar, Harlin is responsible for the venerable scores behind Star Wars: Republic Commando, Battlefront 2, and The Old Republic. The ill-fated Star Wars 1313—which was intended to be a grittier, more mature slant on the fantastical galaxy far, far away—was axed in the aftermath of LucasArts’ closure in 2013. As such, several hours of Harlin’s hard work was lost to the chopping room floor, not least his curious skew on '90s electronica. “The Massive Attack-meets-Star Wars song is sadly totally resigned to the history books,” says Harlin. “I don’t have a copy of it, it’s sitting somewhere on an archive in Disney. I remember spending time trying to figure out how to write this forlorn trip-hop love song. It was interesting.”[/quote]

Someone released some footage of the WIP: 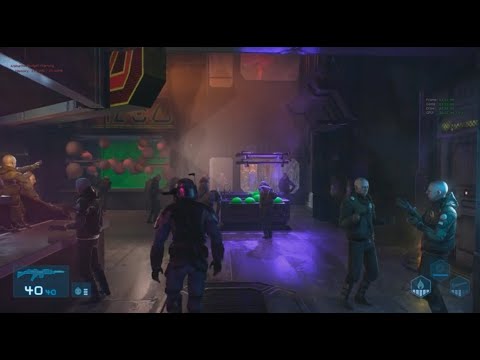 The sliding/traveral stuff reminded me of Jedi: Fallen Order. I wonder if they got some design materials from this game. Probably just similar influences.

When in the Star Wars timeline was 1313 set? Because post-Sarlacc Boba probably would be out of breath after doing a brief sprint.

Between Episodes 3 and 4, according to the article quoted above.