What the Hell Happened to /Film?

So, slashfilm has been one of my daily reads for years now, usually during or just after lunch. It used to be my place to catch up on upcoming movie and TV news, although in recent years I think it took on a more Disney-centric focus, with stories concerning MCU and SW crowding out other news. Or maybe that was just how the industry was rolling. Who knows?

But over the past six months or so, the site has changed for the worse. First, TPTM changed the layout from a centralized focus to a tile-based layout. I guess that’s for phones? Don’t know. But the biggest change has been the sheer drop in quality of their stories now and the lack of variety in their choice of “reporting”. On Monday, there were a bunch of separate stories concerning Harry Potter, due to the HP Reunion that happened. And each one of these “stories” basically regurgitated a quote from the reunion…and that’s it. Rather than having a thoughtful review or a recap of the reunion itself, there’s 15 mini-stories that do nothing other than mention shit that happened on the reunion. Hell, in this screenshot I took, there’s 5 HP stories, 2 Spider Man stories, and 2 Betty White stories. 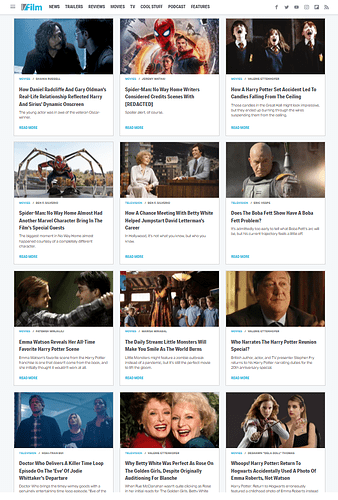 Is the site being written by bots now, that just take random internet factoids and write up a short article? Are real people actually being paid for this fluff?

Somebody give me a new interesting source for film/TV news and related information. Thanks.

I don’t know anything at all about this, but based on your description of what the site used to be and what it seems to have become, my guess is they needed to pivot into a business model that will generate more revenue. Either because they were flailing and losing money or they were bought out and this is the new mandate - take it or leave it. I’m just guessing based on the movies and TV shows I’ve seen where something like this happens. :)

Sounds like it’s suffering from the same issues that all online media producers are. It’s probably really struggling financially, and deciding to follow the eyeballs and clicks / race-to-the-bottom model, likely because the “create quality content for a dedicated few” isn’t paying the bills. :(

Looks like that site is dead. A shame, since I was psyched to see this on the front page. 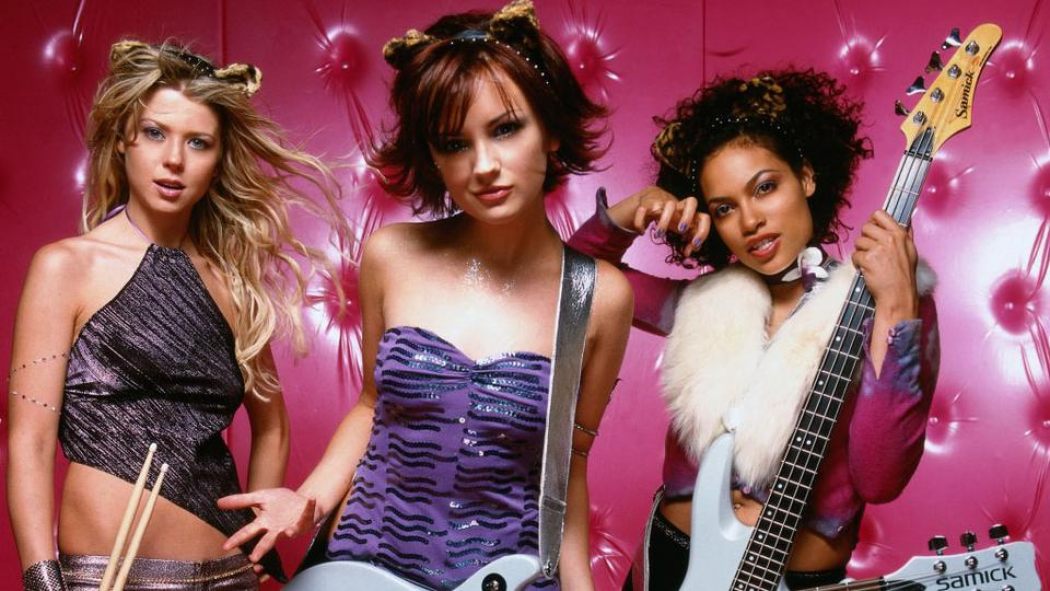 JOSIE AND THE PUSSYCATS Imagined A Cuddly Dystopia That Could Only Be...

I hate that stuff. I don’t know when it happened, but Slashfilm was bought by a VC/billionaire-backed content blob that is several years younger than /Film. They probably have tools that make it easy to identify search queries and write articles to match them.

Two of the folks that worked on The (Onion) A.V. Club and then the still-missed web site The Dissolve – Keith Phipps and Scott Tobias – put together a new newsletter gig. I don’t really get newsletters, they’re a little like Patreon and a little like junk mail. But I guess they’re slightly newer than blogs and are more newfangled, or maybe pay the bills better, than a website. You get some articles for free and more if you pay as subscription.

Deeper into movies (and a little TV). Essays, reviews, conversation. Past and present. From the editors of The Dissolve. Click to read The Reveal, a Substack publication with thousands of readers.

I like following some of the other former AV Club writers too. Tasha Robinson has been writing for Polygon. I guess The AV Club is still around too.

The A.V. Club seems to be in a death spiral - it’s still producing content but it’s a shadow of what it once was.

The A.V. Club internet seems to be in a death spiral - it’s still producing content but it’s a shadow of what it once was.

Twenty-five years on and still no-one has figured out how to make writing on the internet pay actual money. If The Athletic can’t do it with all the big names they’ve hired, maybe it can’t be done.

Just shut it down and go back to magazines.

I listen to the Slashfilm Daily podcast, and Peter Sciretta (the founder of the site) said that they massively increased the number of writers late last year. Looks like that’s what all the writers are doing.

The A.V. Club seems to be in a death spiral

I think this story has been discussed in the last few months but the latest owners are acting especially scummy towards their employees/content-generators now.

Per thread, they’re sticking them out on a limb and setting fire to the tree. 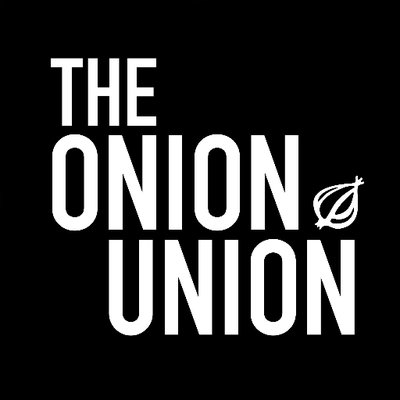 @OnionIncUnion
Last month, G/O management told its seven Chicago-based A.V. Club employees that they either had to move to Los Angeles to work in the company’s new office there or lose their jobs. The employees were not offered cost-of-living increases. 1/X gawker.com/media/av-club-…
Djscman January 18, 2022, 10:26pm #12

Requiem For An A.V. Club:

@OnionIncUnion
UPDATE: The seven A.V. Club workers in Chicago have decided to take their union-contract-protected severances rather than move to L.A. without a cost-of-living adjustment. A statement from the union (1/X): https://t.co/IOUwuR0TWn 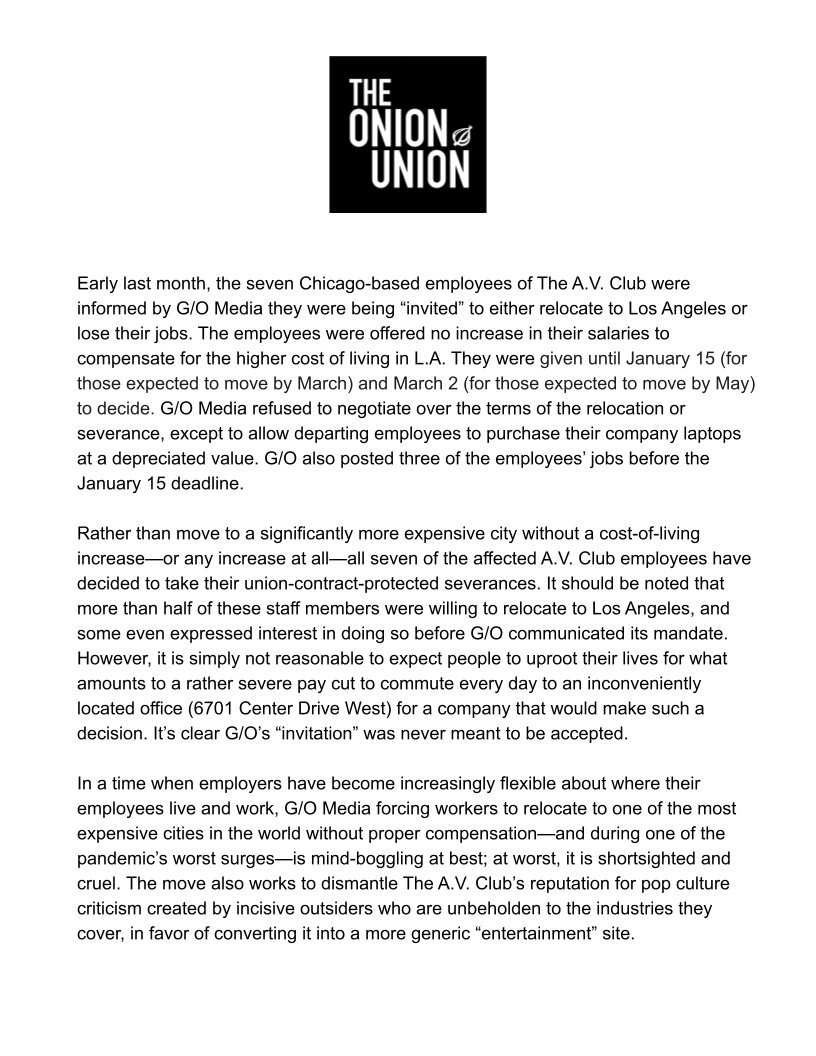 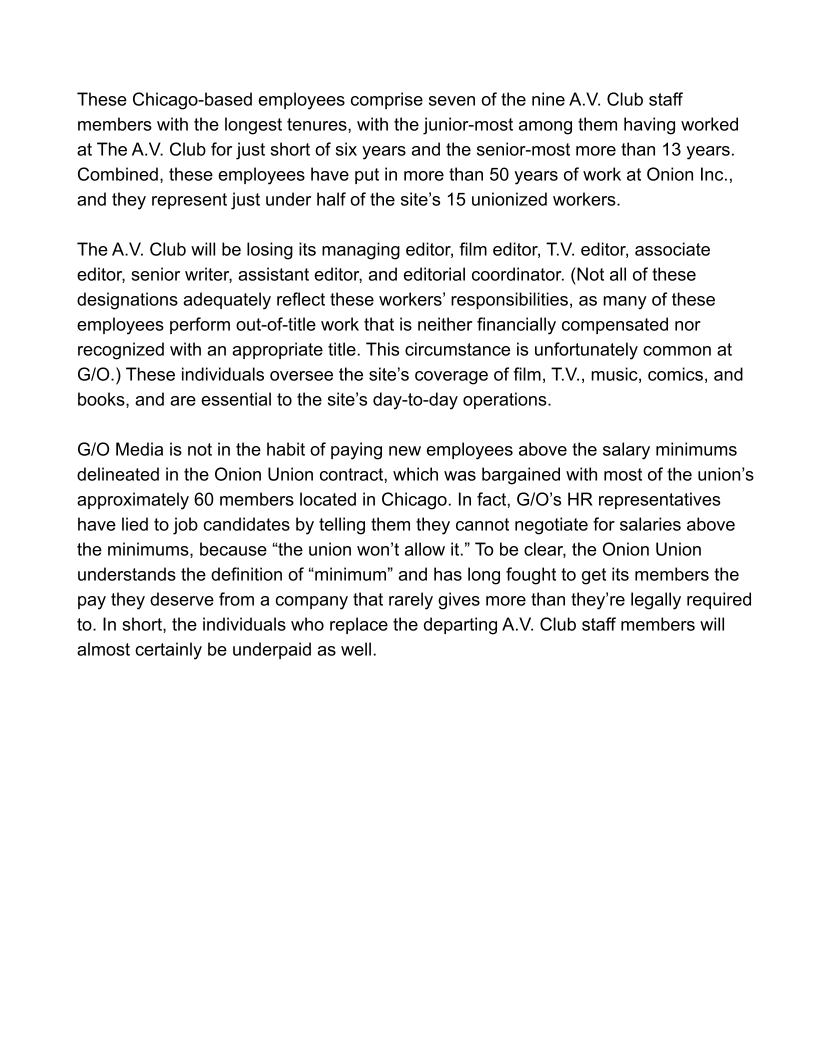 Yeah, thats pretty sad to hear. I gave up on slashfilm a few years ago, but AV has been pretty decent, though also on a downward trajectory. Guess this is the final push?

I guess movie sites are very tough to keep profitable.
Used to follow Collider as well, but thats turned into the usual listicles and click-bait spoiler articles. Sometimes there are still a few nuggets in there, but overall the site is a write off.

Similar to Den of Geek which used to be pretty cool, but has also devolved into shallow fluff.

In terms of movie/TV news what good sites are still out there? Deadline perhaps?

I struggle to find a decent site for movie news/criticism maybe as well (I’ll be honest, QT3 was my go-to for that for the decade the pod lasted). I can’t bring myself to care about the MCU anymore, and that seems to make up the most content.
These days I only watch RLM and talk with a few people who are into movies as well. I try to avoid trailers for what I might want to watch and enjoy, too, which is a problem with most movie sites as well. Nyeh.

I can’t bring myself to care about the MCU anymore, and that seems to make up the most content.

I’m with you on this, but I extend my indifference to Star Wars as well and that’s almost 90% of all slashfilm content. Disney’s saturation strategy of the properties has totally turned me off.

I’m with you on this, but I extend my indifference to Star Wars as well

Right, basically the whole Disney franchise-monolith. I haven’t even watched Mandalorian season two (although maybe I should, that show is at least good)

Yeah, I don’t really read movie websites any more, let alone magazines, which I haven’t read since the days of Neon. I listen to the Kermode & Mayo show and get a moderate amount of news/criticism via podcasts, though most of the ones I listen to aren’t aimed at new/upcoming releases. Generally I just find out about movies I want to see after they’ve been released.

I guess movie sites are very tough to keep profitable.

This and there are a million newer sites like CBR, ComicBook, and a ton of clickbait listicle sites that have saturated the market, and yeah, they’re all pretty bad. They split podcast quotes into 5 or 6 separate articles with stupid headlines. They print unsubstantiated rumors. They mix opinion pieces, reviews, and sponsored content willy-nilly.

I stick with industry sites like Variety or Hollywood Reporter now, and for reviews I care about I just log in here.

I’m with you on this, but I extend my indifference to Star Wars as well

Right, basically the whole Disney franchise-monolith. I haven’t even watched Mandalorian season two (although maybe I should, that show is at least good)

Coincidentally enough, this just popped up on The Guardian.

The Book of Boba Fett has resurrected the badass bounty hunter, only to destroy everything that once made him so great. It’s a fate worse than being eaten alive

What originally made Boba the most interesting and mysterious character in the franchise was the fact that we knew absolutely nothing about him. Back then, he was just this cool, armoured bloke who stood on the side looking hard. He never took off his helmet and he barely spoke – he had a grand total of four lines in The Empire Strikes Back, and none at all in Return of the Jedi. And yet he still went on to become one of the most popular and talked about characters of the original trilogy.

And this right here is the problem I have with all of the new SW shows coming out. Sometimes it’s better to NOT know things. To create your own stories using your action figures and DIY playsets (or at least your imagination, if your figures and crumbling sets are in a box in the attic). I don’t care about more Boba Fett stories, or what Obi-Wan did for 18 years on Tatooine. I wouldn’t be surprised to have a mini-series set on Ord Mantell with Alden Ehrenreich playing Han. Can’t have a gap in the storyline where we can make up our own stories, after all!

At least The Mandalorian attempted to create its own story in the SW universe, from what I understand. Well, until a certain Jedi shows up to jerk-off the fanboys. I’m sure I’ll catch it someday, but once I read about that I just lost interest.