Due to some… well… extreme customer service by Asus after I bought their new 4k monitor, I’m now sitting here looking at a shiny new P87 Pro MB and an i5-4670K to put in it. The only issue is I have an OEM processor, which means I need to buy an additional HSF unit. I used to know about these things, but I don’t now, and Newegg’s selection seems paltry for socket 1150 supporting HSFs.

Hence, I turn to the kind folk here to recommend a HSF combo. I don’t see extreme overclocking here or anything, but having some headspace would be nice. For reference, I currently run my 2600k @ 4GHz.

Nice job on the free hardware!

If you want to get a new one, price/performance champ is the 212 EVO.

I still like the Zalman’s (which for some reason are pretty cheap in the UK), but the Evo is fine.

Nice job on the free hardware!

If you want to get a new one, price/performance champ is the 212 EVO.

Dude, it wasn’t me at all. I made one post on a hardware board, the Asus rep tracked me down, asked me some questions, tried to work me through stuff, determined it was most likely my MB/Video Card giving me weirdness, and then took over from there. I’m screwed now, because I’m one of those “Customer Service should matter” guys, so I’ll now be buying Asus for life… or until they give me equally bad customer service to offset I guess. But seriously, this is the type of customer service I remember from 20+ years ago, it was very impressive.

Anyway, I think I’ll leave the old HSF on the old processor, and I’ll eventually migrate that into my wife’s old i7 920 box (or perhaps slowly save up for a better case and use it as the basis for a new rig for her…). In the meantime, from what I can see I may actually care more about overclocking the 4670 since it’s apparently slightly sub-par to the 2600k somehow (maybe only when heavily overclocked?).

Are the self-contained water rigs worth it for another $10? I’d love to get rid of fan noise entirely if possible, though my baseline is the stock intel cooler on the original Ivy Bridge release, and I do still have a Titan in the machine so it’ll be making some noise too (perhaps most of what I hear?)

Wish I had time to care about and keep up with this stuff these days, but I don’t… :/

I took a chance on a sealed-unit water cooler on my most recent build a few months ago, and the thing has been working great. Installation was about as easy as an air cooler, and no maintenance required. Newegg sells a bunch of different brands, but my understanding is that most of those OEM’s source from the same one or two suppliers. I picked the Coolermaster because it was deeply discounted at the time.

I buy nothing but Noctua.

Since you asked about them, I should mention that when I installed mine I replaced the stock fan with a Cougar fan. Coolermaster likes to use sleeve-bearing fans, and I didn’t want to trust it for my CPU. The stock fan may be quiet, but I never tried it.

My case has a mesh grill on top, and if I put my ear close to it I can make out the patter-patter of the pump. Otherwise I can’t hear it above the whoosh of the Noctua case fans, which in turn are not loud by any stretch.

I buy nothing but Noctua.

If you’re going air cooling (i haven’t bit the liquid cooling bullet just yet) there is really no question every time i’ve looked in to building a new computer. This could have changed in the past year or two, but i REALLY REALLY REALLY doubt it.

I’d get the biggest one you could fit in your case. Not only do these do a really good job, but they are generally quieter than most other fans.

I think this is the one i got: 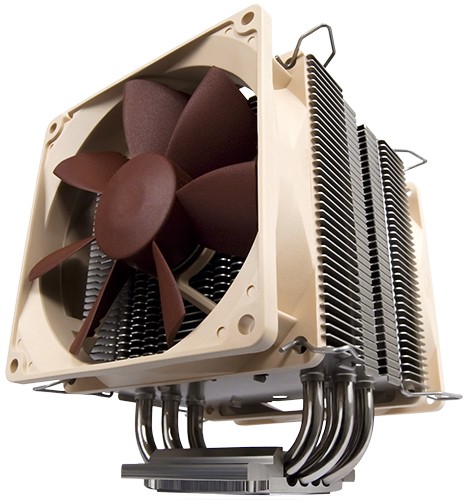 They are pretty massive, so if you foolishly got a mini htpc case, you might want to look at a more wimpy model.

Allow me to hijack this thread for something semi-relevant.

I have an i5-3330 with a Gigabyte H77N-WIFI, with a Corsair H60 sealed water cooler & its 120mm fan. Is there a feature with this chipset/motherboard where if the MB detects the CPU fan is not spinning, then it refuses to power up? What is this feature called? Is there a way to find out from Windows (Event Viewer?) if this had happened?

What happened to me the past weekend is that this computer (my beloved Steambox) shuts down with no warning, and does not boot up when powered again…lights are on, hard disk spins, fans spins (I think), but no outputs no beeps. This can only be restored by me moving the PC upstairs to hook up to the LCD monitor instead. I didn’t see any escaping smoke or exploded caps or any other obvious signs.

Incidentally, I’d imagine that if the water cooler thing on the CPU fails, the CPU will overheat very quickly, and the MB should shut itself down immediately. What would happen if the fan on the radiator side fails?

Are the self-contained water rigs worth it for another $10?

Basically no. The cheap water rigs are not as cool as a good air fan, and if you get a 135 or 140mm fan cooler (I like the look of the Zalman CNPS14X, myself) it’s pretty quiet.
The Titan will be a LOT louder than that sort of CPU fan.

KaoFloppy - No, it won’t get to windows if the CPU fan isn’t spinning, even getting into the bios before thermal protection shuts it down is a crapshoot. (You can see fan RPM’s in the bios). But what happens there is it shuts down, so if you turn it on and it runs for more than 15-20 seconds, it’s…not the CPU fan, basically. What you’re describing sounds a bit more like a dead video output (if it works on your upstairs LCD you already know that ofc).

Thanks for the info, guys. I went with the Hyper 212; seemed more than sufficient for modest OC needs, I liked it better than the Zalmans because most of them had integral fans, whereas the Hyper has an externally replaceable fan, and I liked them more than the Noctuas because $$$$. :)

With the money I saved from the Noctua I decided to throw in on a new SDD, so got an MX100 256GB. Now I can put a fair number of games on it, and give the 30GB of the 120GB I currently have back to the OS whose partition is ever-increasing in size due to Win64 SxS. (God, what a horrible system that is… guaranteed to essentially always get bigger and bigger and take up more and more room…)

Look for my new thread: “I’m swapping out the innards of my computer; how do I make this painless in Windows” ;)

Actually the block-cooler Zalman designs fans are clip-on like most cooler fans these days.

Actually the block-cooler Zalman designs fans are clip-on like most cooler fans these days.

Hmm… I kept seeing these round, orb-like ones, with a fan in the middle and/or on the outsides. But I will say that one big block of fins looks much like the rest otherwise, so maybe I glossed over other designs.

It’s all a bit moot anyway, since I’ve never had an HSF fan fail on me. The real issue with the Zalman’s were that I’d once heard the copper orb-like one was very good, so if I’d gone with them I would have kept upgrading until I got to that one. (9900 Max or somesuch I think?) At that point there are LEDs attached, and I’d be forced to get the LEDs that match my case fan LEDs (red, don’t ask, they came with the case and I have just enough OCD that I feel the need to make sure they all match even if I generally leave them off!), and the red orb Zalman was like $12 more everywhere than the blue, which annoyed me.

High quality empirical research is what I do at work! At home, for fun, it’s all about stupid reasons like that! :)

Ah, I was assuming you were just looking at block designs, and I avoid the ones with the LED’s. Solid black case, anyway.

I WIN! IN YOUR FACE FELLAS!

I WIN! IN YOUR FACE FELLAS!

THE HELL WITH YOU!

I know this is already done, but i go here for info on fans and cooling:

They have a couple of recent 140mm fan roundups.

Okay, next question. Is 55-56 C running prime 95 @4.2 GHz decent temp/cooling? Trying to figure out if I got enough thermal paste on the HSF. (I mean it’s enough because I’m running, but did I leave a significant amount of cooling potential on the table?)