What's the Matter with Kansas? 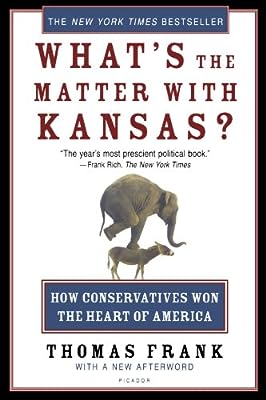 What's the Matter with Kansas?: How Conservatives Won the Heart of America

With a New Afterword by the Author The New York Times bestseller, praised as "hilariously funny . . . the only way to understand why so many Americans have decided to vote against their own economic a ...

Thomas Frank has basically figured it all out. The bizarre conservative fixation on a liberal media conspiracy, the focus on fighting culture wars that they cannot, by definition, ever win, the unfalsifiable hermetically sealed worldview - he’s got it all nailed, history and analysis framework described.

Basically, for whatever reason, economics has been ruled completely out of discussion, so the woridview and anarchist & socalist Kansas of 1900 has turned into the anti-abortion Kansas of 2000 that elects flat-taxers. It’s like a zen puzzle - what do you get if economics is somehow surgically excised from class warfare? The voter base of the modern Republican party, convinced it is assailed on all sides by an omnipresent yet shadowy liberal elite. Sure, they aren’t in government, but they’re out there! Coming for your children! Without the economic foundations of class, all that’s left is stand-in signifiers like authenticity, latte-sipping, and Volvos - and guess who that applies to? The Hollywood version of liberalism.

Which fits perfectly with the one really, really important thing Frank figures out is that in a culture dominated by media - People magazine, television, movies - liberalism is defined by it’s cultural representatives. Liberals = annoying hollywood movie stars who hector, taunt, and sneer at the flyover country. Never mind that liberal politicians, and liberal wonks, who do that simply don’t exist - the media overrides all.

Sure, you may lose your job, your health care benefits, see your kids turned into crass imitations of the worst the media produces by the unmitigated glories of the free market, watch your entire town disintegrate around you - but hey, that’s life! Can’t do anything about it. What you can do is something about your imagined social sphere of cultural persecution.

Mind you, I have no idea what to do about this, but there you go.

Oh, and this framework explains why Kerry is probably going to win this year. He’s given the GOP virtually no cultural flesh to sink their backlash meat hooks into.

Sure, he’s no Clinton, but he doesn’t come with Clinton’s culture war baggage. The worst they can do is windsurfing.

Forgot to mention: this isn’t a wonk book. It’s a totally hilarious narrative that happens to provide the perfect explanation of what’s going on with the narrative of US society and politics.

There’s Latin-mass Catholics in Kansas, if you can believe it. Then there’s the guy who decided that the current Pope is not valid because of Vatican II, and got himself elected as the real Pope. His family even had a calender with “elect Pope” on it circled, that they showed to Frank.