Where does all that energy go?

What are you on the Dawkins scale?

Since it’s a pretty interesting system, I decided a poll is in order. It’s not perfect, of course, but better than the Christian/atheist split. Strong Theist: I do not question the existence of God, I KNOW he exists. De-facto Theist: I cannot know...

The Sun’s power (about 386 billion billion megaWatts) is produced by nuclear fusion reactions. Each second about 700,000,000 tons of hydrogen are converted to about 695,000,000 tons of helium and 5,000,000 tons (=3.86e33 ergs) of energy in the form of gamma rays. As it travels out toward the surface, the energy is continuously absorbed and re-emitted at lower and lower temperatures so that by the time it reaches the surface, it is primarily visible light. For the last 20% of the way to the surface the energy is carried more by convection than by radiation.

That is quite a lot of energy.

Not to speak of the emerging black holes when no further energy output is to be expected. It is also interesting to see that black holes are not the galaxy eating beasts which most of us believe them to be:

The energy created when black holes merge contributes to star formation while blowing gas to the outskirts of a galaxy, creating a limit as to how much the black hole can consume, a new computer simulation shows. The work helps confirm what astronomers have increasingly suspected in recent years, that black holes are integral players in the process of galaxy building.

Black holes have a reputation for sucking in everything, but in fact they lure distant material with no more force than any other object of equal heft; a black hole’s mass determines its gravitational effect. The most supermassive black holes typically contain less than 1 percent of the mass of a galaxy.

The energy created when black holes merge contributes to star formation and blows gas to the outskirts of a galaxy, creating a limit to how much the black hole can consume, a new computer simulation shows.

So…where does all that energy go and what is it for?

I am not a scientist, but even thought there’s a lot of stars, there’s also a LOT more empty space. A quick google shows the average temperature of space is merely 3 degrees above absolute zero. Total amount of stuff divided by total amount of ‘space’ is merely a rounding error. (if space even exists)

As for how black holes work? I don’t know, fucking miracles.

The energy that goes into a black hole is emitted as Hawking Radiation, which is why small black holes evaporate very quickly and even large ones will shrink over time if they don’t take in any more mass.

Radiated energy, whatever the source, just keeps traveling in space until it hits something and is reabsorbed. That could eventually lead to the heat death of the universe and eventual decay of all matter into the background radiation. Maybe.

What it’s for? That’s more of a theological question…

Why is it so vast?

Why are you people?

Space is big. You just won’t believe how vastly, hugely, mind- bogglingly big it is. I mean, you may think it’s a long way down the road to the chemist’s, but that’s just peanuts to space.

I love seeing what happens when people are exposed to cosmology for the first time.

Miracles, people. Fuckin’ miracles all up in this bitch.

Energy per unit-volume falls off as the cube root of distance; there aren’t anywhere near enough stars around to counteract that.

Oh yeah, I knew I’d heard this before.

In astrophysics and physical cosmology, Olbers’ paradox is the argument that the darkness of the night sky conflicts with the assumption of an infinite and eternal static universe. It is one of the pieces of evidence for a non-static universe such as the current Big Bang model. The argument is also referred to as the “dark night sky paradox” The paradox states that at any angle from the Earth the sight line will end at the surface of a star. To understand this we compare it to standing in a forest of white trees. If at any point the vision of the observer ended at the surface of a tree, wouldn’t the observer only see white? This contradicts the darkness of the night sky and leads many to wonder why we do not see only light from stars in the night sky (see physical paradox).

Even if stars were much, much closer together, it still wouldn’t matter much to us. If you go out to the orbit of say, Neptune, the sun looks tiny and weak. If you were to put a bunch of stars right outside the heliopause it would make basically no difference. Our universe is so huge.

Our universe is so huge.

If the universe were infinitely large containing an infinite amount of mass, there would be infinite points of light in the sky representing infinite numbers of galaxies. Every possible angle that you could shoot a line through in space would be occupied SOMEWHERE by a star, making our view of the cosmos white, not black.

If the universe were infinitely large containing an infinite amount of mass, there would be infinite points of light in the sky representing infinite numbers of galaxies. Every possible angle that you could shoot a line through in space would be occupied SOMEWHERE by a star, making our view of the cosmos white, not black.

Which is why the Universe can’t be static (which we also have data to prove). The Luminosity of a star drops with the distance cubed. In fact, it drops faster than that at extreme distances because of optical depth - even empty space contains cosmic dust that absorbs light. Even if every possible line of sight eventually reaches a star, it doesn’t matter if the star is very distant. In fact, the stars we see in other galaxies are only the brightest - there are dimmer stars there we just can’t see. In other words, it isn’t about how many stars there are, it’s about the density of stars. If the matter in the universe is infinite, keep in mind that it is also infinitely expanding.

Damn, Kong. It was only 2 posts above yours.

BTW, space is round, and NOT infinite. yay!

Just so y’all know, it’s a treat to be getting astronomy lessons from the Cosmic Hippo.

Also, Simon Singh’s Big Bang:The Origin of the Universe is a wonderful book. 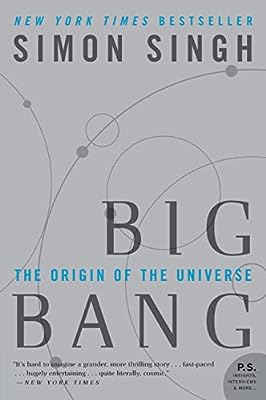 Big Bang: The Origin of the Universe

A half century ago, a shocking Washington Post headline claimed that the world began in five cataclysmic minutes rather than having existed for all time; a skeptical scientist dubbed the maverick theo ...

Do you believe there to be an infinite amount of space?

Just so y’all know, it’s a treat to be getting astronomy lessons from the Cosmic Hippo.

Ha! Sorry if I got all lecturey, I just get excited about this stuff!

BTW, space is round, and NOT infinite. yay!

Okay, those two Wikipedia articles actually do a terrible job of explaining it, but in a nutshell, data from looking at “echo” from the big bang and other cosmological background radiation suggests that, propelled by repulsive gravity, space itself - and possibly matter - is inflating faster than the speed of light. Moreover, our observable universe may actually only be one of many “bubble” universes that are expanding into their own space from the same source. It’s wild stuff.