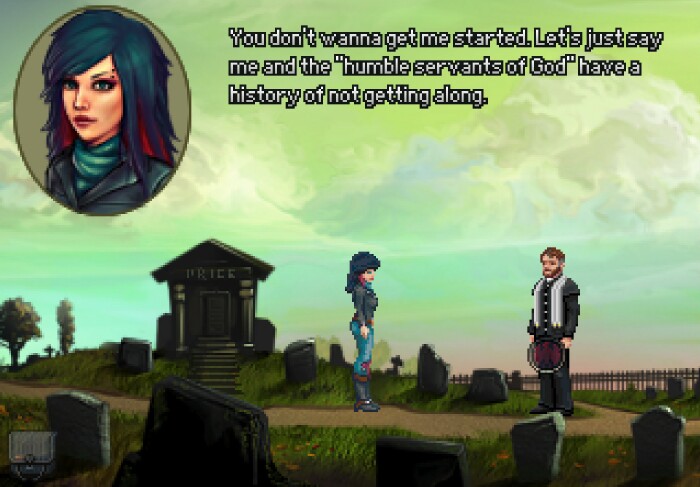 Kathy Rain is a bit of Nancy Drew for adults meets Gabriel Knight for non-hardcore adventure gamers. So far I haven't run into any puzzles involving cat fur and maple syrup..

I'm considering buying a copy after hearing this.

I'm always down for a new adventure game. So when you say non-hardcore, do you mean light on puzzles, like a Telltale game?

Is it worth it? I pretty much buy the games you recommend Tom.

Oh, I couldn't say yet. I'm way too early to get an overall sense for it. But I'm enjoying that sort of pithy early Lucasarts presentation with a modern sensibility.

Correct, but my only frame of reference for Telltale's game is the early Walking Dead episodes, which I didn't like one bit. :(

adventure games are sooooo niche nowdays i dont think they have had much hype since like the 90s when they were a huge thing especially on pc was all about the point and click games and space sims.

It's similar to the Wadjet Eye games.

"As part of the publishing agreement, Raw Fury is paying Hasto to keep working for the next year, regardless of what he’s working on."

Purchased and played the starting scene for a bit, thumbs up so far! Thanks for the tip!

There are many high profile graphical point-and-click games these days: Life Is Strange, the many Telltale franchises, Wadjet Eye, Her Story, Double Fine, Dreamfall Chapters, etc. If you include puzzle-adventure games like The Room and walking simulators like Gone Home, the list is even larger. This doesn't even touch on visual novels, romance simulators, the Choice Of games, Failbetter-likes, Twines, and traditional parser IF, which are all thriving sub genres.

yeah i know i meant popularty wise im not complainin i love the genre i play most iof them myself :D

Publishing deals like this remind me of medieval patrons of the arts. Set a guy up in an apartment somewhere and just let him create.