That’s got to be a penalty for Qatar, surely.

No penalty for Qatar, and after one of their defenders slips in front of the box, Senegal is up 1-0.

I shall have a shot of…something, probably tequila, for ever England goal.

I they’re going to win today for sure.

I hope so, but let’s not get complacent.

Mind you, I thoight England would be rubbish last time, and they went further than Spain, whilst I was living in Spain.

I saw the England Sweden match whilst in IKEA, and I’m sure I amused the people there lol.

Which British tabloid do you work for?

I think the result this morning helps the US. England will know now that a draw is probably enough, meanwhile the US needs a win to avoid a potential 2010 must-win last game and everyone loves beating England.

I really love this change that if there’s lots of injuries/stoppages, all that just gets added to the end. I always felt like that’s how it should always be, and it feels like with this World Cup, that’s finally happening. It should really disincentivize time wasting tactics.

2nd goal by Senegal means bad news for Ecuador, if they hope to qualify out of this group. I think they’ve got to be rooting for Qatar to have a better showing in the remaining 40 minutes or so.

I was just thinking, can they get through with 3 ties? That’s 3 points. If England beats Iran, I think the 3 points from 3 ties is enough to get the U.S. through.

England have already played Iran. 3 points cannot now be enough for the US, as that means England and Iran will finish on at least 4 each.
On the plus side, the US will have their fate in their hands even if they lose today: a win against Iran will be enough for them unless Wales beat England, in which case the US may need to win by enough goals.

Oops, sorry, I meant “if England beats Wales”, of course. But you’re right, a tie with Iran would give Iran 4 points, so the U.S. can’t qualify with 3 points. So is that not possible in this group format? To qualify out of the group with 3 ties?

This is a really entertaining match.

Back in 1990 England’s group was so tight that two teams finished with identical three-draw records down to goals scored and goal difference and so they had to draw lots to see who finished second.

I’d love to see a group go to a coin toss in this World Cup.

There is a fair play tie-break ahead of the coin toss.

Ha. Has this ever happened in this format? Suddenly I want to see this happen, with tie breakers being goals within the ties, or fair play points.

I’d love to see a group go to a coin toss in this World Cup.

I’d think Fair Play points that I posted above are so detailed, you couldn’t ever get to the coin toss, could you? I suppose you could.

I got curious and looked up the tie breaker rules and thought I’d share them. 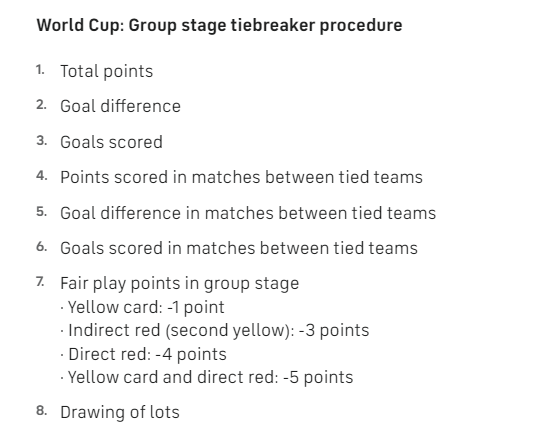 Now I’m sad this is no longer possible in the current world cup (we didn’t have two ties in any of the groups in the first round of matches), and this format is going away, and they’re trying something completely different for 2026.

Yeah, it’s harder now with the additional levels in the tie breaker that weren’t there in prior competitions, but I’d still love to see press from the country sent home by a coin toss. Not least given the tie between this finals and money.

Now I’m sad this is no longer possible in the current world cup (we didn’t have two ties in any of the groups in the first round of matches), and this format is going away, and they’re trying something completely different for 2026.

I wanted to see more of this when Senegal went 2-0 ahead.

Qatar finally get their goal that they’ve been threatening for the last 15 minutes.

How many substitutions are allowed now? 5? Back in 1990 World Cup when I started watching, I think it was either 1 or 2 allowed.

5 now, but you’re only allowed three substitution events (not including breaks like half time).

So you can bring on a total of five players, but you can only stop the game a max of three times.