Yeah I see that, just assuming that isn’t going to happen!

And if the score in both matches is the same (win, lose or draw), we will get a tie-break that goes to fair play.

You mean for group stage winner?

And the host country (Qatar) is eliminated, if my maths haven’t failed me. Two teams in group with 4 points (Ecuador and Holland), so…yeah.

Senegal has 3, won’t they advance with a win over Ecuador?

You guys confusing me.

Senegal has 3, won’t they advance with a win over Ecuador?

This is correct. Only a win will be enough for Senegal.

It would also mean the end for Ecuador unless Qatar somehow manage to beat The Netherlands by a larger margin than Ecuador lose to Senegal… phew :D

Not now. If US draws Iran, Iran and England have 4 points.

If I were US, you need win vs Iran no matter what, I’d play to keep the margin down vs England, take a point if possible, but not go too defensive as US isn’t that good on defense. Hope Wales doesn’t blow out an England side with nothing to play for. (This is why you want the 1 point at least, means no matter what, you advance with a win)

Don’t play the folks on yellows except as subs if you can steal a result. (and Acosta should be needed vs Iran, who will likely play dirty, Acosta is the American best skilled in the dark arts) 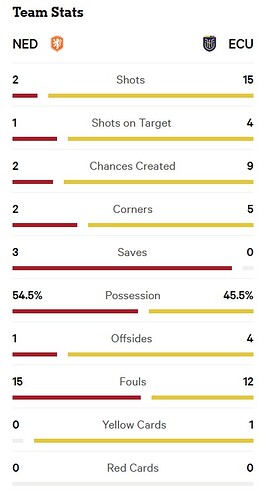 Look at that xG

Not looking so good for the US early on.

The US started alright, but they were cut open by a slick England move and Kane’s shot was charged down. Since then England have started to take control, pushing the US back a little deeper than they would like you would think.

Seemed a bit of a desperate strike.

Credit to the commentators on Fox, they’ve managed to hold out for 27 minutes this time before wondering why the referee hasn’t shown a yellow card to America’s opponent heh

Arrrgghhh, that could have been our best chance this game.

I’m hoping it was.

Looking at the replay, had that been under the crossbar, Pickford would’ve gotten a palm to it.

Yeah have to admit it was bad luck for you.

Either way, too close for comfort.