I saw the announcement about WoW Classic the other day

but haven’t seen much about it since except for article at Eurogamer.net

World of Warcraft Classic: We ask Blizzard our biggest questions

Eurogamer has become quite used to attending Blizzcon and asking the World of Warcraft team about their stance on Legacy servers. We're not so used to Blizz…

which Mark_Crump was kind enough to post the link.

I would like to see it happen primarily for nostalgia. But I have some reservations; there have been a lot of changes to WoW since it was released. Some of them have been very good (account-wide mounts, e.g.) and I would hate to have to go back to the old way of doing things.

How do you feel about WoW Classic? Are you going to check it out?

This is the first thing about WoW that’s interested me in a while.

For me it would be purely a nostalgia trip, but also it would appease my desire to always have access to older games. It’s a bit sad that I can easily play the code-perfect version of 1983’s Ultima III, but can’t go back to how WoW was in 2005. I can dust off 1998-era Half Life or Unreal any time I want (and I frequently do), but MMOs are a different beast.

I suppose they will make some compromises in terms of game mechanics, but I’d like to see it as close as possible to the old days, warts and all. Early talent trees, no OOC rez on druids, real value to Warlocks’ water breathing skill for other party members, hunters managing arrows, rogues having to buy their poisons at that little store in Ironforge – all that wonkiness. Of course ‘the old days’ – by which I mean pre-TBC – incorporates all manner of patches and tweaks. If they left it where it was before TBC launched, with access to ZG and Ahn’Qiraj, I guess that would be good, although part of me would like to see a super-old-school server that caps at Molten Core…

Again, for me, it’s purely a nostalgia hit. They might get a month or two out of me if they do this right. I’d like to PUG Scarlet Monastery again. WITHOUT meeting stones! I know, I’m a masochist. But those kind of things were legit my best memories of WoW back in the day. If I want to play a new game, I’ll play a new game. I hope they don’t hedge too much and are willing to tailor this for people who genuinely enjoyed the game as it was in '05/'06. When a Baron run in Strat Dead was kind of a big deal, etc.

Who knows – maybe I’ll have to dust off my Chuck Norris and ‘where is Mankrik’s wife’ jokes!

They should follow Everquest and do progression servers, rather than remaining static in the launch experience.

Progression, allowing players to go through the “ages” of WoW, that could be awesome. But classic, just vanilla, nothing after? Just how many people are looking for that? How many people think of vanilla WoW as classic? Because to me, WoW always had TBC, a classic server is just going to feel wrong in some ways, not quite the nostalgia thing it should be. What’s the period that “most” people think of as classic WoW?

My guess would be “whenever you started playing”.

Anyway there is a demand for vanilla servers, based on the population of some of the emulated ones. I just happen to feel that demand would die down pretty quickly a couple months in, once all the bosses are killed and on farm and there’s literally nothing to do to well, progress.

What’s the period that “most” people think of as classic WoW?

For me it was Vanilla up to and including Molten Core, and maybe Burning Crusade after.

After that is when I bailed. It became an end-game raid experience that I wasn’t interested in. Too much work, too little story, too much obligation to my guild mates, and too little progression (other than gear).

Oh god - 40 man molten core raids, which took 5 or 6 hours? It was amazing but never, ever again. Yes, I ran an rp guild and we had to team up with 4 other rp guilds to get enough people. It was quite the adventure 😁 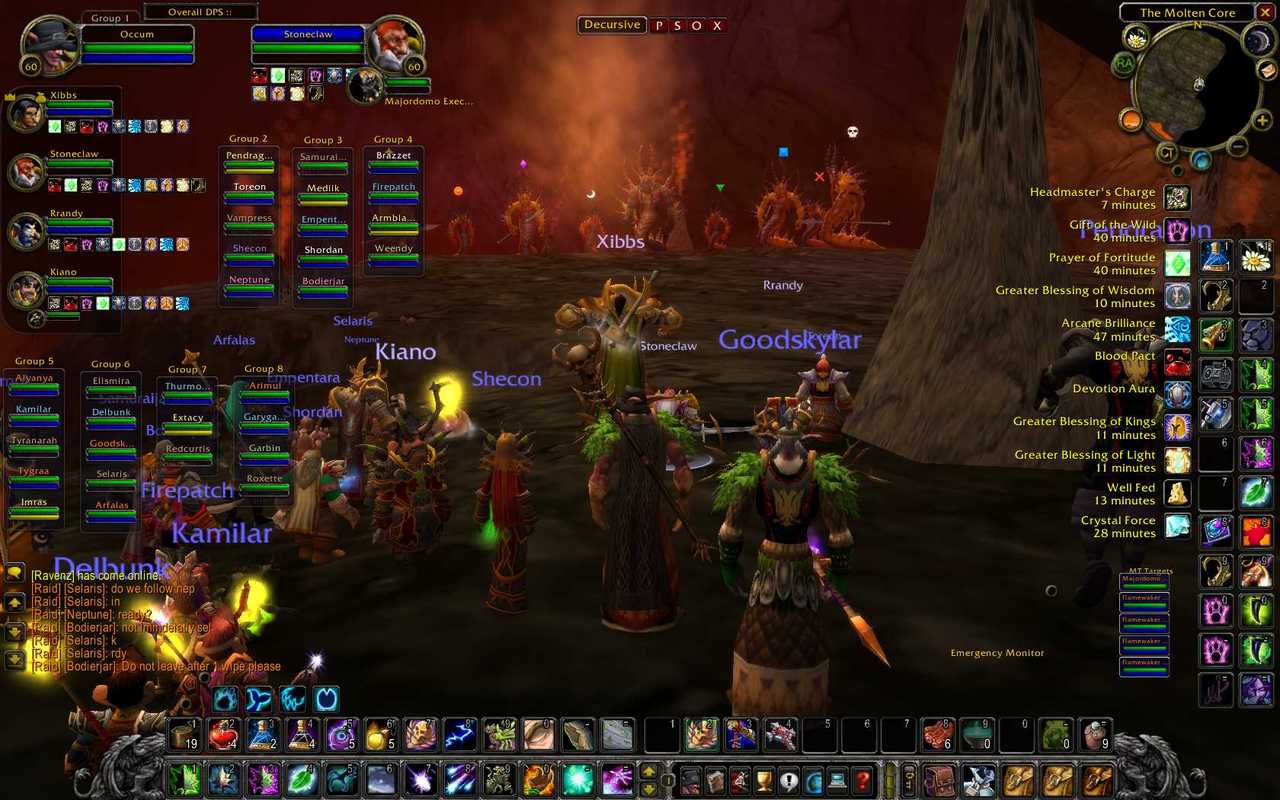 Yeah, I don’t get the appeal for this. I raided extensively in vanilla and waiting for 40 people to get ready was just an enormous pita. And there were a whole slew of mechanics back then that were removed for good reasons. I mean buying ingredients to make poisons for a rogue or tomes for warlock spell was just tedium that added nothing.

Edit: And oh hell, I just remembered that originally there was no party or raid buffing and all buffs had to be done per individual. Adding even more time to the already tedious raid pacing.

I’m very curious how many people want Vanilla servers in their own right, vs. how many enjoy existing emulated vanilla servers because they are free.

Battlegrounds in vanilla existed at a time when there were real class differences between the factions, and when some really interesting class specialties were available. Probably the most fun I ever had in the game was the level 20-29 (I think?) Warsong Gulch BG.

Sharing a PvP server with those people (it was also pre-sharding so each side got to know the other) made it even more fun.

I’m very curious how many people want Vanilla servers in their own right,

I would spend a few days in vanilla just to remember the awe I originally felt when running through the starting areas, and it dawned on me just how huge the game world was. But not more than a month sub.

Granted, this was over 10 year ago. WoW was incredible for its time and I remember the impact it had on me then. Blizzard got a lot of my money then, and well-deserved.

But I have no interest in going back.

(I’m too buried in LOTRO, which has lore that I am familiar with).

Did I enjoy WoW a hell of a lot back in 2004? Sure. But there’s been 13 years of mostly improvement since then and I cannot imagine wanting to have that experience again for more than a brief nostalgia tour. I certainly wouldn’t want to pay money for it. For my money it is today the best game it’s ever been. Assuming you’ve unlocked flying in the latest couple of expansion zones, which I have not. But hell, vanilla WoW didn’t have flying mounts either.

I like the idea, but I’d rather see some of hybrid with today’s conveniences

They should follow Everquest and do progression servers, rather than remaining static in the launch experience.

That’s what I was hoping to see. But I’m not sure 60 days is enough time, given the way obsessive MMO players can be, racing to ding BC before most players can afford a faster mount, let alone raid.

Well whatever, make it 90 days. The point is it doesn’t remain static, it’s a staged competition through each expansion.

Does EQ loop back to the beginning after a time? Or just ‘catch up’ to present day and keep going?

I don’t follow it closely having sworn off EQ 17 years ago but I believe they catch up and keep going.

They could do it by allowing “tiered” progression, where each player would have to do something to move to the next version of the game. Have there be a Quest that moves you towards the next server, the next “Age”, give each player a chance to experience the game on their terms.

Sure it would have difficulties but would probably be the best option from an entertainment POV.

My wife and I have interest in playing this whenever it releases. We never really got into the raiding thing, but then even leveling a character to 60 in vanilla was a substantial time investment and one that we’d be happy to experience again for a few months.