Movies
tomchick November 26, 2017, 4:22am #1
I have no business telling the guys who invented the Teenage Mutant Ninja Turtles what they did wrong, but I’m going to do it anyway. This is a companion discussion topic for the original entry at http://www.quartertothree.com/fp/2017/11/25/worst-80s-movie-youll-see-week-teenage-mutant-ninja-turtles/
BrianRubin November 26, 2017, 4:22am #2

This is the TMNT movie you need to see.

Directed by Kevin Munroe. With Patrick Stewart, Mako, Chris Evans, Sarah Michelle Gellar. When the world is threatened by an ancient evil, the four adolescent turtles must reunite and overcome their faults in order to stand against it.

This is the TMNT movie you need to see.

I take it you didn’t read the review. :) Because I’m busy right now watching another TMNT movie.

I appreciate the recommendation, but I don’t think that’s for me. To be honest, I’m outside the age bracket for these turtle guys to be relevant for anything other than DLC for Injustice 2. The Patreon vote was a goof, and while I enjoy writing about silly stuff like this, the only reason I’m watching the 2106 movie is for the CG and a couple of the actors. Look, it’s Laura Linney!

/nods knowingly, unsure whether his attempt at trolling was succressful

How does one ride a skateboard ironically? I assume it’s a California thing.

Sam Rockwell is apparently “Head Thug”. And I guess backed by Skeet Ulrich, as “Thug (uncredited)”.

How does one ride a skateboard ironically?

The same way you wear a Tony Hawk T-shirt ironically. If I had one, I could demonstrate for you!

Sam Rockwell is apparently “Head Thug”. And I guess backed by Skeet Ulrich, as “Thug (uncredited)”.

Whoa, a Skeet Ulrich appearance. I missed that. You can’t miss the Rockwell, since he’s got a couple of scenes that focus on him. When he talks, there’s a weird sense of “wait, that guy seems really familiar”. It’s especially strong if you just saw Three Billboards Outside Ebbing, Missouri a few nights before.

Back then I bought the soundtrack for the 1989 movie because I wanted the song “Tequilla” used in the movie and all the TV ads. Unfortunately I didn’t actually know the name of the song and didn’t realize it wasn’t part of the official soundtrack.

Instead I got this though, so that was cool too I guess (maybe this musical choice will make @Adam_B happy, being pretty close to 90s hip hop and all):

What I actually expected:

The worst thing about this dippy kiddie movie is saved for last. It is a song that plays over the credits. It’s called Turtle Power, but it’s spelled “T-U-R-T-L-E Power”. It is performed by Partners in Kryme. Yep, Kryme with a K and a Y. Which is what I call it when I’m at Krispy Kreme and I get skipped over when they offer everyone in line a free warm donut. The song is a hellscape of commercially brewed inoffensive soft rap.

Now I know for sure you haven’t seen the sequel:

Outdone by his own appearance at the new movie’s premier. you know you love it! GO NINJA, GO NINJA, GO!!!

Too many memories. Please close thread.

Huh, I didn’t even know there was a 2014 movie. The only thing it makes me think of is the idea that toys aimed at boys are growing ever more muscular:

The new turtles are so ripped they could make Dwayne Johnson cry into his protein shake. 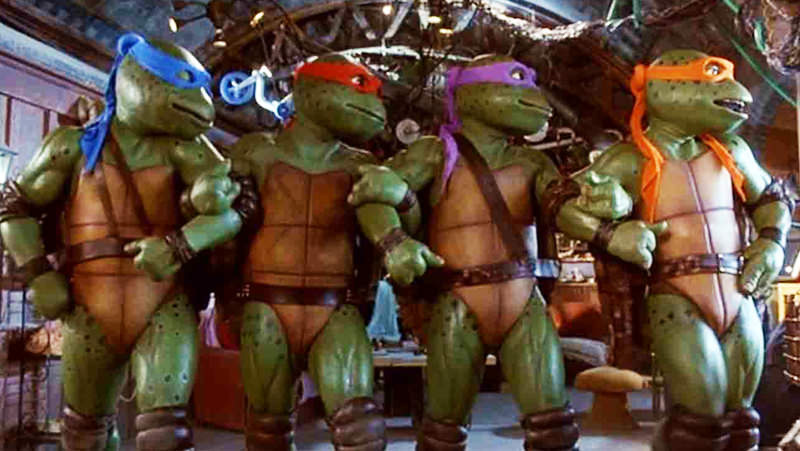 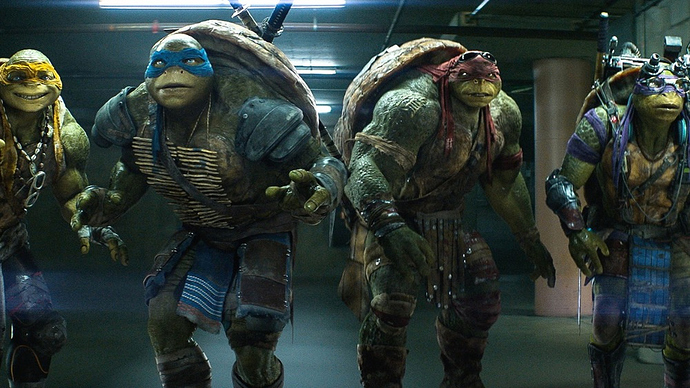 That last picture is… disturbing. I guess the green goo is out and steroids are in.

No differentiation between the turtles? Dude. Leonardo leads. Donatello does machines. Raphael is cool, but rude. And Michaelangelo is a party dude.

The only thing it makes me think of is the idea that toys aimed at boys are growing ever more muscular:

I didn’t read the Telegraph article, but I wonder if pro wrestling is partly accountable. Certainly comic book art? Clearly the difference between celebrities then and now. Look at shots of a shirtless Christopher Reeve compared to shots of a shirtless Henry Cavill. Compare Harrison Ford to Dwayne Johnson. Dudes back then just couldn’t be arsed to even lift, bro.

That last picture is… disturbing.

It makes way more sense to me. They’re freakin’ mutants. It’s right there in the title! They should look like scary monsters. In fact, in the second movie – well, the 2016 one – it’s a plot point that people think they’re scary monsters!

-Tom, who has now watched three TMNT movies and can field any questions about lore, backstory, or character motivation