I’m here once again to tell you that we have more games coming to Xbox Game Pass (this part never gets old) for console and PC! Today we‘ve got a beefy list of games coming soon, DLC, free game updates, Perks, Quests, and games that snuck in as a...

Grounded is the one I’m looking forward to the most in that list.

You need to have them installed on a drive other than C: in order for the icons to stay.

You could create a fresh shortcut from that folder maybe, bit you seem to have triumphed anyway :)

What is Xbox Game Preview?

Xbox Game Preview is a way for our fans to preview and purchase work-in-progress digital titles, participate in the development process and help developers make Xbox One games the best they can be.

So my Ultimate sub expired and it looks like I can get a month of PC Gamepass for $1. This is a no brainer right? I don’t lose anything and I get to check out Halo 3, No Man’s Sky and Fallout 76 for 33 cents each? Plus 1c for something nice for Satya? 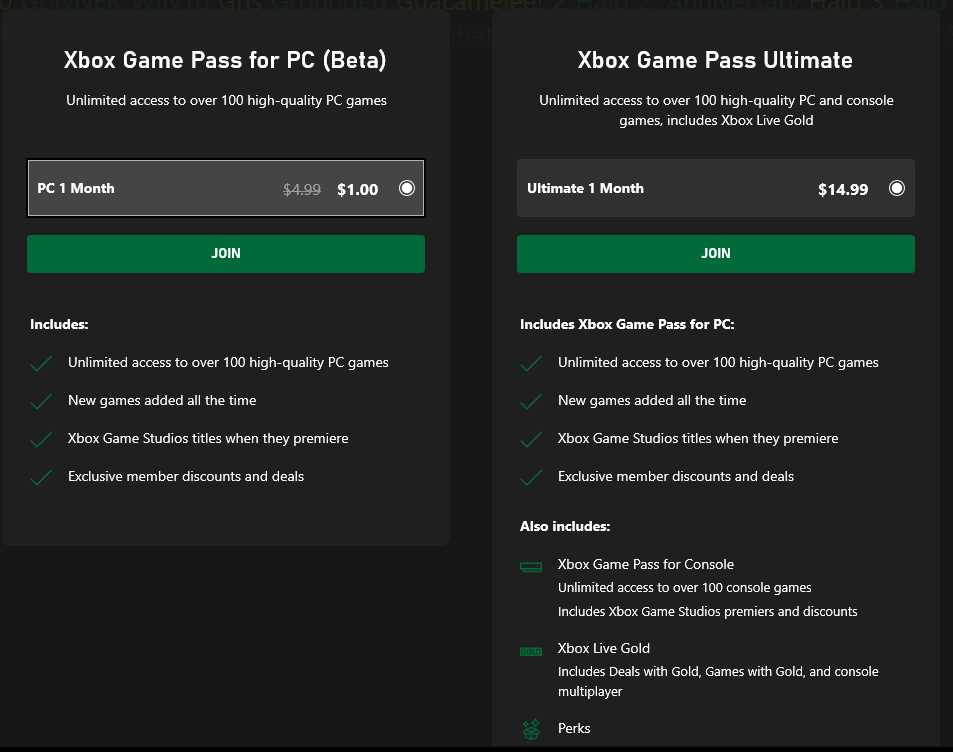 I mean, it’s a no-brainer at full price, so sure.

This goes here, too

xCloud won’t be the final name for launch

Carrion is on gamepass. Console and PC. Installing on both now.

Edit: Made it to the first save point. This is glorious so far.

Thanks for the heads up! I love it too… it’s got a great tone and feel. It’s fun to slither around those levels and cause so much screaming.

Wait, why I don’t see it on my Xbox app? edit: oh here it is. strange it wasn’t on ‘new releases’.

So annoying, the Xbox app appears to have stopped working properly. It launches, shows me my games, but it’s stuck on “Preparing” when trying to install Carrion. It also won’t let me update anything in the settings, the MS Store has somehow vanished, and other MS apps like Photos no longer work. I’ve tried reinstallling the store using Powershell but it just gives me a bunch of errors.

Naturally this all started happening a Windows Update or two ago. It’s also been 3.5 years since I bought this laptop, so it may in fact be time to nuke this installation from orbit, as they say.

There was a big update for the app a week or two ago, did you get that update yet? Both the phone version of the app, and the Windows version. The phone one really needed an overhaul, and it’s a nice fast app now. The Windows version added a lot of functionality from the Xbox Companion App on Windows, which they will eventually try to phase out I think.

That’s ok. I think the app is totally borked. Won’t launch any games, just crashes out when I try and launch anything. If I uninstall it, I can’t reinstall it because there’s no MS Store on my laptop anymore for some reason, and because I can’t reinstall MS Store my thoughts are turning to reinstalling Windows. A royal pain in the ass. I will try some other stuff.

Re: Reinstalling windows. I know they’ve got some reset/repair options now that are different from the old days of Windows. I haven’t had to try it myself yet, but if it’s like the Xbox, you tell it you want to keep your apps, but to reset everything else. And it takes a bit, but then everything is better.

Yeah, looks like it will be necessary though. Just a whole bunch of MS apps that are borked. It won’t even open the photo viewer if I click on a .jpg file in Explorer. I tried the Troubleshooting / App Reset options, but no luck.

Same result as before.