If the next Battlefield comes to Game Pass day 1, then I fear it’s going to be a microtransaction-fueled mess.

The current new releases from EA aren’t in Game Pass day 1, for example It takes two isn’t, so I don’t see any reason to think the future ones will be.

If the next Battlefield comes to Game Pass day 1, then I fear it’s going to be a microtransaction-fueled mess.

It’s an EA game. Odds are good it’s going to be a microtransaction fueled mess either way.

The most recent one isnt a microtransactions mess. Unless you pine for cosmetic things to play dress up with. I suspect the new one will be fine.

Yeah, you guys must not play any EA games anymore. Sports games still have their Ultimate Team “problem” but ever since Battlefront II, EA learned their lesson with regard to microtransactions. It’s all cosmetics now.

They gave away all the additional maps for Battlefield V and implemented an in game store to buy skins for everything but you could also earn in game currency to “buy” stuff too.

Anyway, the only way that BF6 or whatever they call it is on Game Pass day one is if Microsoft arrives with dump trucks full of money at EA HQ. They’ve spent a LOT on getting this one right.

So this app is kinda shit, yeah?

Oh, and it will also fill up your event log with errors warnings every 10 seconds. I repeat – JFC.

(There’s supposedly a fix, it’s pretty complex, and it didn’t work for me.)

Shutting down the Xbox app stops the errors. 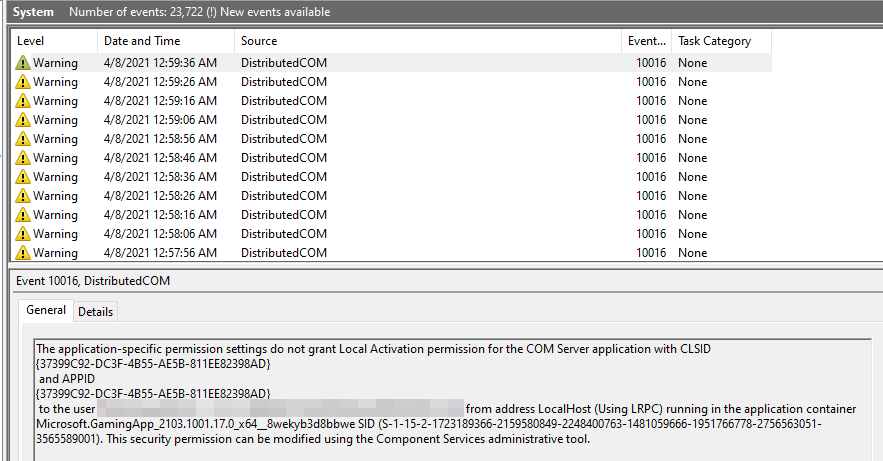 I feel sad for sony.

I see that Zombie Army 4 has appeared on PC Game Pass. Sweet!

Have never once had that issue to my knowledge.

Xbox Game Pass Could Be Coming to Steam

You could fire up an EA Play game within Game Pass via Steam!

Almost certainly not. Or rather, it might be, but nothing in that article gives any serious indication it will be. It’s super, super weakly sourced, and to the extent there’s any fire, it’s all from Valve’s side.

The interesting thing about the rumor is that it’s Valve that’s pushing for it, not Microsoft

Rumor: Valve is Trying to Get Xbox Game Pass on Steam

A surprising new rumor claims that Valve is trying to bring Microsoft's Xbox Game Pass to Steam, rather than the other way around.

I think if you look at Netflix you can see the trajectory for Game Pass over the next few years. Early on mostly older games and licensed content, as reach expands the license owners start pulling content to their own services while Netflix built out its original content. A lot points to Game Pass following a similar path, the acquisitions, EA still needing its own app on PC etc.

GP to Steam is interesting as Steam basically already has the infrastructure to just start their own service if they wanted, they’d just need to hash out the licensing deals.

With Game Pass MS aren’t making much profit directly - they’re trying to get people into their ecosystem, and apparently subscribers are paying more on DLCs and microtransactions, so why would they give away that cut to Steam? It’s no wonder that this rumor says that it’s Valve pushing this as they’re the ones who would benefit most.

Only way I could see it happening at all would be a lite version of Game Pass that only includes 1st party games, similar to how EA Access didn’t include their 3rd party titles when it went on Steam.

If Valve want to get on board the subscription money train then you’d have thought they could come up with their own offerings, whether it be separate channels based on genre or publisher, or one big smorgasbord.

Well, then there is the discussion of what cut Valve would take…

Yep, clearly. I doubt people spending money on the gamepass subscription will use the same money as before on games in Steam.