With Game Pass MS aren’t making much profit directly - they’re trying to get people into their ecosystem, and apparently subscribers are paying more on DLCs and microtransactions, so why would they give away that cut to Steam? It’s no wonder that this rumor says that it’s Valve pushing this as they’re the ones who would benefit most.

Only way I could see it happening at all would be a lite version of Game Pass that only includes 1st party games, similar to how EA Access didn’t include their 3rd party titles when it went on Steam.

If Valve want to get on board the subscription money train then you’d have thought they could come up with their own offerings, whether it be separate channels based on genre or publisher, or one big smorgasbord.

Well, then there is the discussion of what cut Valve would take…

Yep, clearly. I doubt people spending money on the gamepass subscription will use the same money as before on games in Steam.

Valve had a developer Q&A a couple of weeks ago. From the unofficial transcript:

No immediate plans for new subscription services, not for Steam-based content subscriptions either. Still assessing EA Play on Steam & thinking about how subscriptions could work on Steam in the future. Definitely front of mind and something we’re looking at and talking about regularly. Haven’t yet decided on a format that would be good for both customers & developers. Always thinking about this as the industry evolves, but no plans for now.

The success of Gamepass gets me thinking of the dreadful state of PC gaming back in the mid-2000s. I remember Microsoft doing a lame attempt at PC revitalization with Games for Windows but missing the mark. Thankfully Steam did a lions share of the work keeping PC gaming going. Now almost 20 years later MS is finally doing their part. It’s a good time to be a PC gamer.

Game Pass is the reason I bought an Xbox series X.

The cross save functionality is very good between PC and Xbox.

The service isn’t perfect, and the PC interface needs some work, but a helluva deal for 15 bucks a month.

I started Undertale on Xbox Series X yesterday. Back when I played it on the PC, there’s a character that tells you to wait in a room, wait for them to come back and to not go anywhere. I was convinced I was in kind of a Far Cry 4 type situation where I just had to wait long enough. Anyway, I waited a long time, until I got tired of waiting, and that was the end of my run on PC. On Xbox, I kept going instead of waiting.

I think I made the right call this time. :-P

I know this sounds like a stupid question but has anyone found any way to get EA Desktop to uninstall games you’ve installed? Or to move them to a different drive? or to install them anywhere but the C drive in the first place? I swear I’ve been into every menu, and couldn’t find a way to do these things.

So when I wanted more room on my C drive, I uninstalled Battlefield Vee from the Windows settings menu, and same with Star Wars: Squadron. But Star Wars still shows up in the Game pass app as if it’s installed. I had decided not to worry about it until EA desktop got a few patches and fixed their shit, but that doesn’t seem to be forthcoming.

has anyone found any way to get EA Desktop to uninstall games you’ve installed?

You have to go to the Windows Add/Remove programs panel. You can’t do it from within EA Desktop. It’s a known issue that they’re working to add.

or to install them anywhere but the C drive in the first place?

Go to the hamburger menu in the upper left->Settings->Downloads and you can change the install location. Works for me. I don’t think you can move them once installed.

But Star Wars still shows up in the Game pass app as if it’s installed.

Try firing it up and it should automatically clean up the entry when the startup fails.

Although I removed Crysis 2, its icon still shows up in Gamepass. It worked for something else.

Firing it up doesn’t sort it out either.

Thoughts on games leaving tonight if anyone else has nothing better to do:

Wargroove - Seems fun, like advance wars, but forced to play campaign first instead of skirmishes. The first 20 minutes weren’t interesting enough to recommend.

Deliver us the Moon - Going to try to finish this. 5 hours long with the spoiler friendly guide at trueachievements. I’m 25% done and so far it’s an interesting story. Walking simish, but in a space suit.

I really liked Deliver Us the Moon, but I’m kind of a sucker for that whole “engineers in space” thing.

I was going to say exactly what divedivedive said (except I like to call them “engineer-em-ups”!). Deliver Us the Moon is a cool experience–great environmental sense of place, overall very good puzzles.

Although I removed Crysis 2, its icon still shows up in Gamepass. It worked for something else.

Firing it up doesn’t sort it out either.

Same problem with Dragon Age 2 here. Is is amusing how shite both gamepass app and EA desktop are.

Also, I love how Forza Horizon 4 requries update, so I start the update in the windows store, I get the pop-up that it has been updated, but it appears as if it is was still downloading. And this happens randomly.

Windows Store and everything about it is still such a piece of shit, so consistently for so many years, it is almost impressive.

I have every single Windows 10 update there is btw.

You guys convinced me to stay up late with the moon, and it was worth it. Great game! 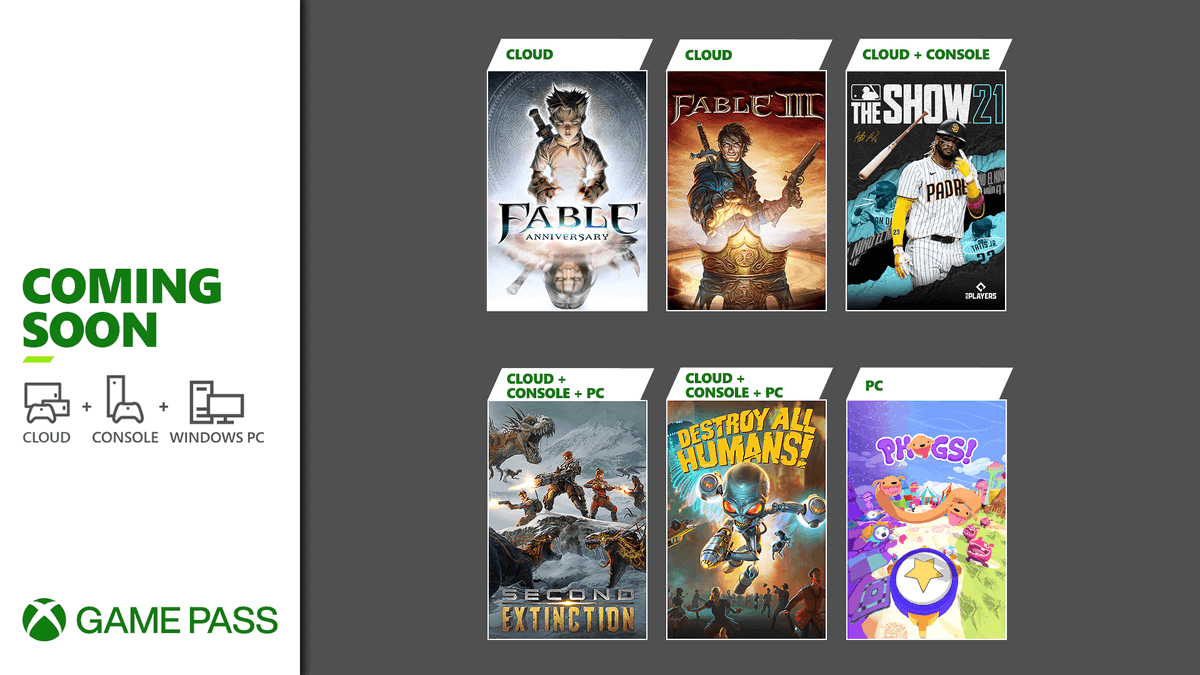 Second Extinction is an intense 3 player co-op shooter, where your goal is to wipeout the mutated dinosaurs that have taken over the planet. Teamwork is vital as you adopt the role of one of the survivors, using a combination of weapons, abilities and skills to take on the vast number of enemies.

Are the games coming to Cloud playable on PC at all?

If you got the beta invite. I’ve been watching my messages, I don’t think I got in.

You could probably screen mirror your phone or something.