Walmart is your best bet. Subscribe to Matt Swider and Lord of Restocks on Twitter. They generally give a couple hours warning before a drop, which are usually at noon PST. You may need to subscribe for a one month subscription to Walmart +. Using time.is, refresh the store page at the exact second that the time ticks over, and click add to cart. You’ll be in a queue, but most likely you’ll be able to get one after a short wait

It’s time for your monthly Games with Gold announcements, here’s what is coming in February - It’s time to announce the February Games with Gold lineup! On the Xbox One and Xbox Series X|S, join in an epic adventure in Broken Sword 5: The Serpent’s Curse, and speed run to a tight soundtrack in Aerial_Knight’s Never Yield. And for our classic...

And for @Rock8man, the video version: 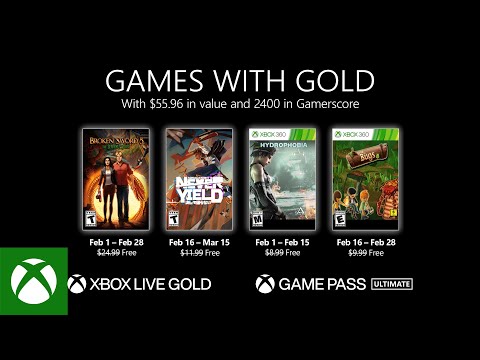 I don’t know much about these games, though I think I did play maybe the first or second Broken Sword a long time ago. Hopefully they’re pretty good!

I almost bought Aerial_Knight’s Never Yield a number of times on Epic Game Store, but I held off.

Oh games with gold, good, I thought that was the game pass list for the whole month and was perturbed that I wasn’t getting my $4.19 in value.

Did you feel a great disturbance in the Force? ;-)

Does anyone here use the “streaming their games from a local Xbox to their PC” thing over their network? I gather it works through the Xbox app somehow. Does it work all right?

What with Cyberpunk 2077 getting a fresh coat of paint and some fixes I thought I might finally sink my teeth into that one–picked it up last summer on sale for 10 bucks. Not something I want to necessarily play on the living room TV all the time.

Does it work all right?

It works ok over my wifi network if nobody else is streaming or taking up bandwidth. Played an hour or so a FC6 a while back in my office from my series X with very few issues, but I was the only one in the house.

Due to some weirdness either in my particular Windows installation* or an issue on Microsoft’s end with the Xbox app having a problem with a “special character” in my Windows User account name, I’ll have to sign into a dummy account on my machine first, but oh well.

*which seems unlikely because if that were the case I couldn’t just create a dummy account with no special character and have it work fine with the app’s cloud and streaming functionalities–said account depends on the same installation of Windows after all. And my “bad” account name still lets me play Xcloud games through Edge.

Oh BTW have you noticed that the resolution isn’t native on your PC monitor when you’ve streamed? I wonder if it’s limited to 1080p.

Yeah, once they upgraded the data centers to Series X hardware it’s been capable of 1080p and 60fps. At Xbox, our mission is simple: bring the joy and community of gaming to everyone on the planet. To achieve that, we aspire to empower everyone to play the games you want, with the people you want, anywhere you want. We are creating a future that...

That entire generation was so underpowered.

The XboneS base PS4 were pretty weak, yeah, but the refreshes fixed all that.

The PS4 Pro was a perfectly fine 1080p gaming box, although it had aspirations for more.

And of course the XboneX was a powerhouse for the time-- its GPU is substantially faster than the XSS. Totally competent for 1440p, although it still couldn’t do 4k without tricks. But of course neither can the XSX in lots of titles.

The entire generation had weak CPUs, but games don’t much care about that.

Is the One X GPU really “substantially” faster than XSS?

From what I’ve read, it seems though the One X GPU has 6 Ttlops vs. XSS’ 4 Tflops, the generational tech differences make it so the XSS GPU is actually a little faster.

They’re different architectures so you can’t compare them that way but yes, the XboneX GPU is much faster with more memory bandwidth.

So what magical Discord or Twitter or whatever do I need to stalk to find an XSX. I used up most of my luck on a 3080 but I’m leaning Series X lately because Gamepass exists and the games I would play are on this too.

It doesn’t seem to even be on Newegg’s shuffle bullshit thing either.

What I used was the HotStock app on my phone… just turned on notifications, and it let me know when something was available.

Also, I think you’re able to tell HotStock where you live, so it can potentially show things like local inventories at places like Target or BestBuy. If you live in an area outside of big cities, this can be a pretty good way to get one.

I had originally gotten mine through online order on Walmart, but after I got it, I later had a number of opportunities to buy XsX’s from local retailers, since in the less urban area I live, there were a lot less folks monitoring those inventories, so they didn’t get snatched up instantly like they do in ciites.

I’ll give it a shot but there isn’t really local inventories that I can get to quickly either. Fun, fun.

Also you can sign up for the best buy “totaltech” plan. It’s $200, but you get first dibs on buying hardware with drops on mondays. And if you cancel within 60 days you get a refund. Which is what you should do.

I would make separate accounts for the totaltech plan and use single-use creditcard numbers to do it repeatedly, if I still needed a Xbox/PS5/GPU.