You must be at least this gay to ride this ride

So, they just had an update on a court case brought against a softball league back in 2008, after it prohibited two guys from playing in it because they weren’t gay enough.

Everything about this seems insane.

Second, you’ve got a rule that says you can’t have any more than two heterosexual people on a team… which, in itself, seems to be kind of nuts. It seems to suggest that there’s some notion that straight guys are automatically better at softball, and thus more straight guys would be “ringers”. So… lulz to that.

Finally, there’s the fact that these two guys were actually sat down in a room of over 25 people, and asked questions about their sexuality, like how many men vs. women have they had sex with, and then actually held a vote to determine whether they were “gay enough” to play in the league. Really, folks?

What consenting sports teams do in the privacy of their own clubrooms is of no concern to me!

I don’t think softball has an antitrust exemption.

I’m more than a little confused what the legal standing to sue is. The judge looks like an Onion parody of what judges look like: 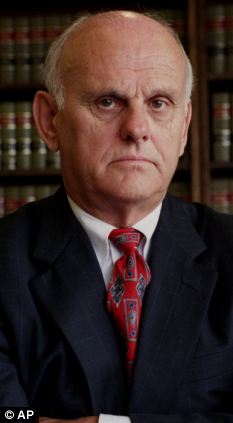 Beth Allen, the alliance’s attorney, told the newspaper the lawsuit is unwarranted and that the three plaintiffs “were not discriminated against in any unlawful manner.”

She said the alliance is a private organization and can determine its membership based on its goals.

The lawsuit, however, contends the tournament is a “public accommodation” that is open to the public and uses public softball fields.

I guess the racial analogy is a whites-only softball team that is open to the public and uses public softball fields. I dunno if they’d win that one either.

What consenting sports teams do in the privacy of their own clubrooms is of no concern to me!

Unless of course its a straight softball team (or majority straight), then its discrimination and a hate crime.

The Stranger wrote about this a few months back.

Melani told me right up front that playing against straight teams in the Portland city leagues has convinced him it’s important to have a cap on straight players for NAGAAA’s premier annual event.

“The amount of slurs and the amount of abuse that we take—in Portland, Oregon!—is amazing,” he told me. “Last year, we arrive to play against another team, and the umpire says, ‘Oh, here come the crossdressers.’” On the field, he’s heard opposing players call out “Faggot!” or “You throw like a girl!”

“Meanwhile,” Melani said, “we beat the shit out of these guys.”

He went on: “There was one time, a few years ago, where we split a double header with a straight team—they were ready to take baseball bats and come to blows because we were gay. Mind you, my team was not out there hugging and kissing everybody. That was not what we were doing. We were playing softball. And we were beating them. And that was a problem for them.”

This is one of the many hard-to-duplicate experiences that come with playing on a gay sports team, this opportunity to humble—and enrage—straight people who aren’t used to gays being good at sports. It’s a reminder that, to make the clichéd metaphor literal, the playing field still isn’t even. Even in our quickly shifting culture, gay people still face discrimination and hostility, still spend a certain amount of time crisscrossing the divide between explicitly queer spaces and dominantly heterosexual spaces. Partly because of this, for many in the gay community there’s still a powerful pull toward moments, like the Gay Softball World Series, in which that kind of divide-crossing gets put on extended pause.

This kind of protective discrimination is not unique to gay sports. According to court documents, the Black American Softball Association allows just four “non-black” players per team and demands birth certificates as proof of race; the Native American World Series has a cap of two non-Native softball players per team and requires players to carry “Indian identification”; and the SMASH Softball Tournament for Asian/Pacific Islanders allows only three non-API players and requires “proof of ethnicity.”

As you can see, alternative weeklies just don’t have time to devote the tons of energy and incredible reporting to a story that the big newspapers like the Daily Mail do.

The Mail deserves its own web-forum instafail rule. I honestly would rather see a Fox News url.

What do you mean bisexual people aren’t homosexual? They’re all GLBT, aren’t they?

Unless of course its a straight softball team (or majority straight), then its discrimination and a hate crime.

Won’t some one think of the poor, oppressed white males?!* The way those gays commit those hate crimes against them is a tragedy, a tragedy, I tell you! Just as well Ranulf is on the case to fight for justice, and the right to stick their nose into anything and everything just because they want to, the right to remind everyone that they are white, straight, and entitled to stuff just because.

What do you mean bisexual people aren’t homosexual? They’re all GLBT, aren’t they?

Bisexuals get shit from both ends of the sexuality spectrum, and for remarkably similar reasons. They get told by both heterosexuals and homosexuals that they don’t really like both genders and they should pick a side already, and paranoia about them being stealth hetero/homos.

You don’t even want to see how vicious the fighting between the GLB part and the Ts can get.

A friend’s mum told her “bisexual people are just greedy!” ;)

Heh. I have a friend who’s a bi-poly-switch (gotta love college kids). Her standard meta-comment is “I’m not confused; I’m just greedy!”

Won’t some one think of the poor, oppressed white males?!* The way those gays commit those hate crimes against them is a tragedy, a tragedy, I tell you! Just as well Ranulf is on the case to fight for justice, and the right to stick their nose into anything and everything just because they want to, the right to remind everyone that they are white, straight, and entitled to stuff just because.

Yay, the “I’m a racist/hater Helen Lovejoy” (Killjoy perhaps…) charge. Why do homosexuals get special dispensation from the state/society? Aren’t we all equal? I really truly have no problem with a gay softball league, thats freedom of association. Yet anything that isn’t catering to whatever victim class is popular at the moment leads to protests. A great example being the Masters golf tourney at Augusta (men only golf club) or say Curves gyms for women. I’m all for a woman’s only gym, just don’t go banning a men’s only gym while claiming to be paragons of equality and fairness.

How does anti-discrimination work if it’s ok for gays to discriminate against other sexual orientations (including straights). “You’re not allowed to exclude us but it’s ok for us to exclude you?”

Seems to me that the idea (for example behind the gyms) is that the majority already has a space in which they aren’t marginalized (current co-ed gym system) and the minority doesn’t (women who want to work out without being harassed).

At a guess. shrug I haven’t exactly researched the topic.

How does anti-discrimination work if it’s ok for gays to discriminate against other sexual orientations (including straights). “You’re not allowed to exclude us but it’s ok for us to exclude you?”

I think the only two straighty rule has more to do with the softball people not wanting slurs from a critical mass of straight people on the field.

Which is pretty lame. Instead they should make up all sorts of fun new slurs against the straight people. I say if life throws you a lemon, return fire.

There isn’t anything wrong with a gay group choosing to be a member of their club, just like various other organizations have rules about who can be in their clubs.

The idea of sitting down two bisexuals in a room and grilling them by asking them personal questions to prove they are gay enough seems to be kind of crazy though.

If I was a chick I would totally be a lesbian

Well, I can understand the idea that you are entitled to associate with whomever you want to associate with, but I would imagine the “Straight Guy Club for Straight Men” to be immediately picketed by the GLBT community. I just find reverse discrimination illogical.