You will save the world -- and what a world! -- in Fallout 4, whether you like it or not 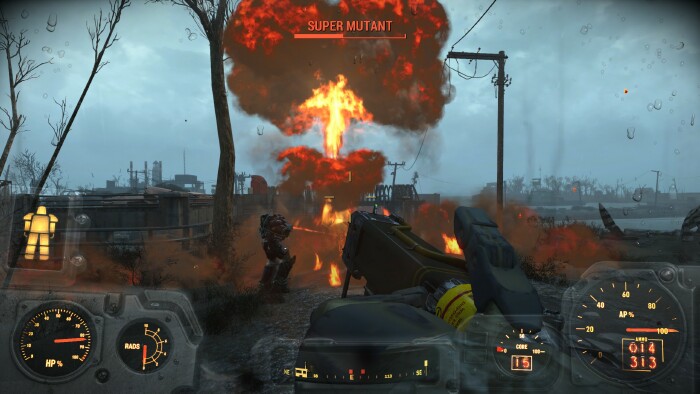 Fallout 4 is a Fallout about restoring civilization. It is not just a Fallout about a wayward family member, a water purifier, a GECK, a dam, or your favorite faction. Sure, those things might be in here (Fallout 4 directly repeats some of Fallout 3's plot points)..

That's an interesting point about the travel vs. fast travel options. I haven't played Fallout 4 yet, but I always end up falling back on fast travel eventually in the other Fallout games. It's not that I dislike open worlds, I had always wished the Assassin's Creed games that include sailing had had much more open water to move around in. I think it's just all the back and forth fed-exing, and that immediate repopulation of enemies that I end up just wanting to completely dodge (or drop the game completely, like in Far Cry 2). I wonder if Bethesda games should consider down-sizing a bit, make the open worlds smaller but more interesting, to make people want to walk around in them?

Seriously though, did they really expect anybody to play this with CoE4 releasing within the same week?

Didn't play it! I have heard good things about it though, so I probably need to look into it.

Tom - I will be deeply disappointed if your character is not the woman in the leather trenchcoat.

I really enjoyed that game and it was largely because of exactly that point. It was sometimes frustrating, but it was mostly exhilarating to balance the risk of getting really stuck in a bind somewhere because an encounter took a little more resources than it should have or you got too curious about what was around the next bend.

" The worst you can do is pet the puppy sarcastically" sums Fallout 4 up nicely, I think. Well said.

It was a good read right up until the Fast Travel rant: You know you don't have to do it right? The game never forces you to do it, heck it even punishes you doing it with somewhat long loading screens (unintentional). If you wanna see the vistas, go see the vistas. If you don't wanna see the vistas, fast travel, if you wanna see the vistas but not all the time, especially when you are in a rush, only use fast travel when you are in a rush. It's your own fault for fast traveling everywhere. It's a sandbox single player experience, play the way you want. Unless you are one of the assholes who only feels good when others are forced to play a game your way, in which case, go f--k your self and everyone like you. It's easy, if you don't like the fact that you can just teleport to a defenseless settlement DO NOT TELEPORT!

P.S. State of Decay had cars, EVERYWHERE, you could literally crash your car in a pole, get out, tumble a few feets and end up nose first in another perfectly functioning car.

"But then you get to the missions gated by resource stockpiling."

Thank you for letting me know about this, because I've been pretty much ignoring all this construction BS in what is otherwise a big step up in quality from Fallout 3. Maybe not as good as New Vegas, but Bethesda clearly put a lot more effort into their writing than last time.

Seriously though, did they really expect anybody to play that with Fallout 4 releasing within the same week?

this game had so much potential to be great, and it turned out to be yet another disappointment from hype. Bethesda hasnt learned anything these days. they keep fallin' back more and more on streamlining every series they make. where's the complexity anymore...

In the current cultural climate, wouldn't one rather 'pet the puppy' ironically.*

I literally had to google what that was, and having seen the screenshots... do you really think they're competing for the same audience? Fallout4 is an action/shooter with minor RPG elements now, like GTA5. It's not a RPG or (certainly) a strategy game.

"Gamebryo has finally grown up..."

Really, Tom?
Seems to me it's still the same fugly*, buggy PoS it's always been. :/
I was hoping Bethesda would get the idTech crew [more?] involved in development.

FO4 is not just big and complex, but its also happy to have setpieces and happy to have story and places. Is stomach full of cool stuff to share with the player. I personally would give it 4/5 stars because I am having fun with it.

You can build supply lines between your settlements and materials you leave in one workshop are then accessible in another.

My wife was watching me play this and was outraged that something like fast travel existed. I am now banned from fast travel and will be walking everywhere.

Since Morrowind, I've hoped that the next Bethesda game would be the one to deliver the gameplay that matches their open world ambitions. I'm starting to think that will never happen.

Ah well, stomping through the wasteland should be fun enough regardless.

Corrections:
"the end of movies based on a [sic] true stories"
"You['re] going to be a hero who make[s] the ruined world a better place"
"Bethesda just determines [how] frail you are"
"the improvements just makes [sic] the sticking points"
"What a difference five years makes [sic]"