I’m have been writing little blurbs for my list forever (especially since it’s moving all the time, no thanks to a wealthy year and some quality DOS gaming), and this is exactly what I’ve written: not a racing fan, but perfect balance between arcade and simulation, and an insane attention to visual details.
I may have said it numerous times already, but one of my main gaming achievements is having finished the 24 hours race in one sitting with 2 other friends — and the Dreamcast was a robust enough hardware to not crap out!

As for order, I wouldn’t care about it if I were you, or I’d never complete it.

This challenge is nuts.

It’s not intended to break your brain. I think of them more in terms of grouping than thinking that my number 17 is 1% better than my number 18, my brain doesn’t work that way either. The idea would be that there are 100 games that mean more to you than any other. I like the top 100 over a top 10 because 100 lets you get loose, it lets you dig into deeper cuts, games that may not be on anyone else’s list but you’ve always favored them. It gives you room to play.

This won’t work for everyone, and you still need to fudge it a lot, but what I did was “RIGHT NOW, would I rather play X or play Y?”

Tapper – I achieved nigh-total mastery of the C64 port of Tapper when I was a kid. It was a point of pride for me. Such a kick when you get to the alien level.

This must be a different tapper than the one on Xbox Live Arcade then? I’m looking at screenshots and the two look virtually identical. Except the one on XBLA is called Root Beer Tapper, of course. I played that one for months, trying to get better at it, but hit a skill ceiling pretty fast that I never overcame.

I only found a BBC micro screenshot,but this is the general idea: 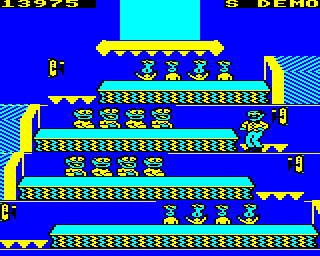 The difficulty scale of the arcade version was ridiculous, it was really trying to steal all your coins. The scaled down nature made the 8-bits ports much more interesting, as might often be the case with Western coinop games actually?

@divedivedive brought up this thread in the top games of the decade discussion, and I wanted to bump it because it would be awesome to get some new lists. 100 games really forces you to get down into the obscure stuff, and I loved asking people about their favorite games that I’d never even heard of. I’m not complaining, but most of the games of the decade were the usual suspects…

I definitely need to revisit my list and add some games from the last few years. Obra Dinn will definitely place quite well!

Nah, 100 is perfectly doable. I may take this on in 2020. Seems like a good year to put together this kind of list!

Gold of the Americas

You always have the most games I’ve never heard of Nightgaunt. If you have the chance, can you briefly describe these?

Portal [PC] – Great puzzler with the famous gravity gun. Assumed the sequel was more of the same and never got around to it.

While the sequel does obviously have the burden of being a sequel and therefore not an original creation, it does do quite a few different things from the original. I would still put the original in my top 100, but not the sequel, and yet, it’s still a really great game that’s worth your time.

At once it is able to play around more with the concept and create some superior puzzles for it, while lacking the complete novelty factor.

Both are worthy of playing. However the narrative unfolding of the first one is the perfect video game story.

I’ve been working on mine. I think I have the list mostly finished (and like others I found that there are actually games I played a fair amount of that will not be making the list). The fun part is the commentary/personal experience of each, though, so I’ll be back when I’m able to get that together.

Oasis - A great ministrategy game that I think is impossible to get now, unfortunately. It’s Minesweeper meets Civilization. Seriously.

Knytt Stories - A free platformer by an indie dev named Nifflas. There is a level editor that lets you make your own games with it and once upon a time there was a small but vibrant community making some pretty good custom stories.

Alien Legacy - A space strategy/narrative game by Joe Ybarra, who was the producer for the Starflight games. It feels a bit like Star Control, but it takes place in a single solar system. You explore, collect resources, build colonies, and pursue a fixed story that develops as you spread yourself to the various planets. Very playable these days, though it would require some patience. Unfortunately, I think it can only be acquired from abandonware sites right now.

A Mind Forever Voyaging - This is an Infocom text adventure. It’s different from all the others in that it’s not really about puzzle solving. You are an AI that lives inside a simulated world. Researchers are using that simulation to test the effects of some new conservative policy proposals. You basically have to go around this simulated city and record yourself completing a checklist of typical activities, then you jump ahead some number of years in the simulation and do it again, seeing how things change.

Super Crate Box - The first game by indie darlings Vlambeer (Ridiculous Fishing, Nuclear Throne). It’s an endless shooter-platformer where random weapons drop to you and harder and harder monsters come after you. It’s free and worth checking out.

Project: Space Station - A very early Apple II and DOS game from the 80s. We’re tlaking CGA graphics! I believe it was made by Larry Holland, who went on to make X-Wing and TIE Fighter for Lucasarts! It’s a strategy game of running a space station–flying shuttle flights with modules, crew, and supplies; launching satellites for cash; and running research projects. It’s not easy to look at anymore, and there are some clunky design elements, but I still enjoy playing it. Someone needs to remake this game.

Mission Critical - An adventure game by Legend Entertainment. Imagine System Shock with the monsters removed, as a point-and-click game. You’re the only person on a damaged ship and you have to figure out how to survive and complete the ship’s mission. There’s a little spaceship strategy game built in, too. Very good, and available on GOG!

Gold of the Americas - An older light strategy game for DOS, just predating Civilization, I believe. It’s European powers being all imperial and settling the new world.

NightSky - Another game by Nifflas, who made Knytt Stories. It’s got the silhouette look of Limbo, but is much more chill. You’re just a big marble making your way from left to right. The kinds of puzzles and gizmos that the designer came up with to challenge a rolly marble are pretty impressive! It’s on Steam.

Suspended - Another Infocom game. Maybe my favorite, but really hard. It’s also not typical text adventure puzzle-solving. In the future, the world is run by automated systems that make life hassle-free. This society puts one human being in suspended animation every hundred years or something, to be woken up if anything ever goes wrong with the systems. But that wouldn’t happen! Except it happens, and you have to fix all these malfunctioning systems by inhabiting five robots that all have different capabilities and ways of sensing the environment.

Candy Box - One of the first idle games, but also (unlike nearly all its descendants) a game full of surprises that just gets bigger and bigger as you go. Definitely worth taking a peek at, since it’s free in your browser. (The link is Candy Box 2. I don’t know if 1 is still available.)

The Dark Eye - Not to be confused with some recent RPGs (I think), this is an adventure game from the post-Myst CD-ROM days based on Edgar Allen Poe stories. It’s not really a great game, honestly, in that way that a lot of CD-ROM games were sub-par experiences. But it’s got an amazing art style, using these sculpted puppet-like characters to tell its stories. And a few of the stories really made an impression on me. If you happen to know who cult author William S. Burroughs is, you should check out his dramatic reading of Masque of the Red Death from the game.

The Oil Blue - The guy who made this went on to make Cook Serve Delicious, and it shows. It’s a time management game where you are collecting oil by using a few different oil-drilling machines. You have to jump between them to keep them running properly and to extract oil efficiently. It quickly gets hectic. Cook Serve Delicious is probably a better version of this game, frankly. It’s on Steam.

Vessel - A great PC/Console platformer centered around fluid motion simulation. You are a dude with a liquid-sucking vacuum thing on his back. You use it to solve puzzles by moving fluids around, including living slime stuff. It’s super clever and very well made. Great soundtrack too, if I recall.

A Mind Forever Voyaging - This is an Infocom text adventure. It’s different from all the others in that it’s not really about puzzle solving.

That’s a good point, it’s more of a flow than a typically puzzle-based Infocom game. Maybe a precursor for today’s walking simulators.

Yeah, good point! I hadn’t thought of it like that.

It would be a pretty amazing game to make with today’s open-world technology.

Those all sound incredible. Except Mission Critical maybe. A FMV game? System Shock with the monsters removed?

I put the steam games on my wishlist, and found out that besides the free Super Crate Box, I already own Nightsky and Vessel, so I installed those two. (How does that happen? I’m assuming game bundles).

Both of those infocom games sound incredible, I might have to track those down sometime. The nice thing about text games is that the graphics don’t age.

Edit: Thanks so much for taking the time on this btw. Your elevator pitch descriptions all make the games sound incredible, so the actual games are likely disappointing in comparison to what I’m imagining. On the other hand, they are in your top 100 games of all time, so maybe not.

I hope you like them! Many of them are older, so that can make them harder to get into, of course. And as you can imagine, there’s a lot of nostalgia wrapped up in many of them, too. But I think you’ll find NightSky an easy game to enjoy, and I expect Vessel will hook you. (I need to get back and finish that game.)

Also, I started replaying Candy Box again thanks to your question. Definitely give that a try, just because it’s one of the weirdest games ever, and kind of brilliant. Just don’t give up on it too early.

I did play that at work today, between tasks. It’s kind of perfect for that. By the time I left work, I’d almost stormed the castle entrance, but didn’t quite make it. Hopefully by the time I get into work tomorrow, I’ll have enough to buy some health potions and try again.

That’s where I’m stuck, too!