It’s a Halon fire suppression system to automatically extinguish the burning 4090 cables when they ignite.

And it’s all done, including creating a RAID0 array and cloning the old system drive into the array. I love Macrium.
Now to figure out how to disable all the atrocious RGB from the RAM and CPU cooler. 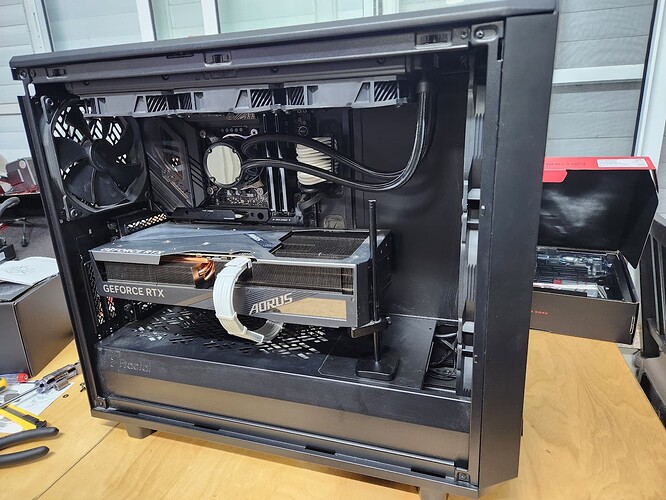 Man that GPU is a chonker. And I thought my 3080Ti was big.
Congrats on the build! I totally empathize in regards to RGB. One of the most important features of my new case was to have without glass so I would see none of it.

That looks like a GPU with some minor supporting components attached :)

What is the “Gaming Trio” card underneath your video card?

Correct! Support that came with the card.

It’s a Halon fire suppression system to automatically extinguish the burning 4090 cables when they ignite.

Now to figure out how to disable all the atrocious RGB from the RAM and CPU cooler.

Why would you give up 10% of your performance?

But seriously, another option is to just set it to white, which is tasteful and not l33t in feels. I have mine pulsing between light blue and white, which I think looks nice without screaming for attention.

It’s interesting how most of a gaming PC is empty space, and most of the actual ‘stuff’ is just heatsink.

That’s because he’s really good at building computers! A bad/sloppy build would be full of wires criss-crossing everywhere (glances at the sff by my feet).

A lot of the credit goes to modern case designs. The jungle vine network of cables that used to creatively redirect airflow inside my case is now hidden between the motherboard and the back panel. 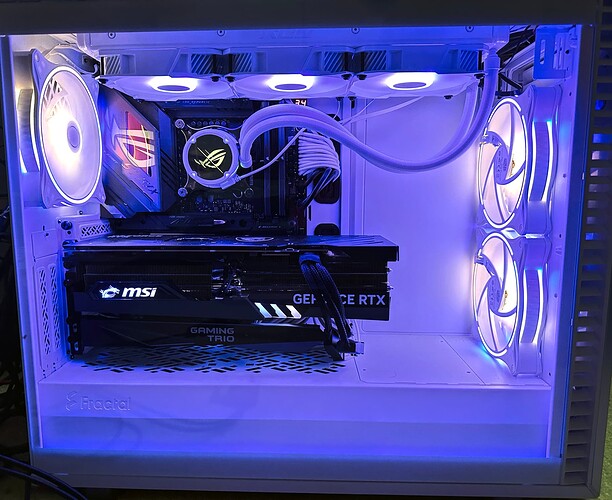 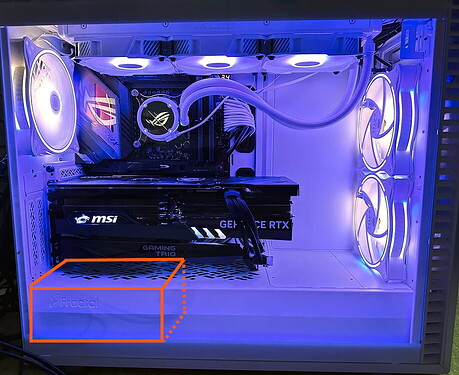 [edit: @sillhouette beat me to it!]

Oh nice, so all the power cables go underneath. Smart design

A lot of the credit goes to modern case designs. The jungle vine network of cables that used to creatively redirect airflow inside my case is now hidden between the motherboard and the back panel.

OK, if I can get mine HALF as neat as yours I’ll be happy. You should see the backplate on mine. When I open it, a spaghetti monster barfs out all my smooshed messy cabling. It’s bad, but I really don’t know how to make stuff organized on the back side.

You don’t know that his backside cabling isn’t spaghetti monster too, though. That’s the whole joy of having that partitioning, I would think. Just never open it!

I have SO much cable spaghetti (I have a few old hdds too) in my old case that in fact I suspect it affects the airflow of it.

I’m sure nothing breaks up airflow like the old ribbon cables did, but certainly modern backside cable containment helps keep airflow clean.

I have a Fractal Meshify 2 Compact and those cases with the PSU basement design essentially force you to route all cables around the back so even my poor cable management results in a fairly clean frontside. It also helps not to have any cables for HDs or optical drives. The only major complaint I have about the Meshify 2 Compact is that there is very little clearance between the backside of the mobo tray and the case panel, so you do have to wrangle those power cables fairly well to close the case properly.

One review I watched noted that the full size version of that case has better cable clearance than the compact version. Hopefully they’ll improve that in the next iteration.

Yeah, my backside isn’t the disaster of my builds 10-20 years ago, but it’s nowhere near as neat as the front! The Fractal Define 7 has cable channels with Velcro holders, which helps keep it from getting too crazy.