It seems like all I do is play Noita on this thing- it’s perfect for that. Just one more run…

do you use the haptic pads for aiming and are they as reliable and accurate as a mouse?

I really like the gyro for fine-tuning aim, at least in the Aperture Desk Job demo thing.

Moving them sometimes wipes your saved games, so decide where you want it before you play it.

I tried Doom Eternal the other day and was surprised how well it ran, at 60FPS as well

I was looking into it earlier and found a pretty good guide. More involved than I was expecting, but doesn’t sound too bad. (Oh, and dual-booting may not be a great option unless you have a higher storage model.)

Yep, got the high-storage version, plus a 512GB card. So I should have the space…

This is a pretty thorough guide as well:

@Noman mentioned that the info in the existing guides has obsolete info, so hopefully he’ll get his guide up soon!

How capable is the Steam Deck at emulating the Switch? Primarily just a small subset of compatible games, or is it good with most of it?

How capable is the Steam Deck at emulating the Switch? Primarily just a small subset of compatible games, or is it good with most of it?

The video posted above goes into it a bit 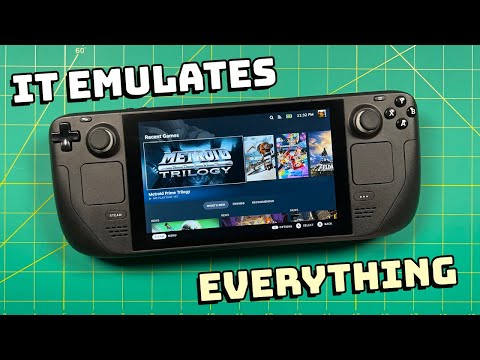 Some games still have issues, mostly with shader caching, but it is getting better.

mentioned that the info in the existing guides has obsolete info, so hopefully he’ll get his guide up soon!

This one was only written 2 weeks ago so should be current hopefully.

I reserved in July and just got my notification. I’m actually not sure I’m gonna pull the trigger. I probably don’t need another gaming device in my life right now.

The real takeaway is the limitation on Switch emulation is the emulator, not the Steam Deck hardware-- and the emulator is software that will improve over time.

Since it’s ready you might be able to re-sell it here. It’s worth asking if you’re up for that.

I think some of this is ramped-up production, but a lot of it is likely due to preorder rates dropping dramtically over time. Even with them shipping July orders now, I bet 90% of the units shipped at this point were probably ordered in 2021.

It’s looking like they might be at “order and we’ll ship this week” in the next few weeks. They went from April to July shipping in a week.

Yeah that’s what I took from it too. Really awesome!

@Noman mentioned that the info in the existing guides has obsolete info, so hopefully he’ll get his guide up soon!

I just posted it in the hardware section.

Got it. It’s bigger than I thought and lighter than some of the posts had scared me into worrying about. :)

Spent too much time playing Vampire Survivors so far. (Had been waiting to try it after having it recommended by a couple of friends.) Why is that game so much fun???

I didn’t think I’d play AeroFly FS2 again, but since it was listed as being great on Deck, I installed it in all of its 180GB glory. You can’t read the instruments on the little screen, but the controls work well for it, and it’s super-smooth. Gonna leave it on the MicroSD card for a little while, at least.

Overall, it’s an awesome little system, but looks like a fair number of games are going to need my reading glasses.

Can anyone answer this semi technical question for me? I have a 1070ti, is the GPU in the deck comparable in term of overall power to run games?

Oh golly, no. Your 1070ti is four TIMES faster than the Steam Deck’s GPU. Or to put it another way, the Steam Deck games 25% as fast as your 1070ti, assuming you have a roughly comparable CPU. Which isn’t hard, because it’s a mobile power-optimized zen2.

The Steam Deck’s GPU is actually a slow piece of shit, the reason it works is because it plays games at only 720p with FSR1 upscaling on a tiny screen so you really can’t tell how bad it looks.

It’s actually tough to find an equivalent GPU without going back like multiple generations, it’s so slow. The closest is probably a GTX1050 non-ti, which is still roughly 10% faster.

This is why the Steam Deck desperately needs better upscaling, because FSR1 is garbage. And it needs a variable refresh screen, because that saves battery and feels vastly better at low framerates.