Always bet on Duke Nukem to keep coming back

Duke Nukem 3D: 20th Anniversary Edition World Tour is coming. It’s another version of Duke Nukem 3D. This new remastered version of the shooter features slightly upgraded graphics, an improved framerate, re-recorded voice acting by Jon St. John as Duke, five new levels, and some new weapons and enemies. Much like the Halo remasters, players will be able to toggle between the original graphics and the new renderer on the fly, although Gearbox Software cautions that other than some cleaner textures and a “true 3D” presentation, the game will look the same as you remember it. Producer Scott Warr emphasized that keeping the game’s original feel was important even in the new episodes, despite the old tools being somewhat of a headache for the level builders.

In the mean time, if anyone feels nostalgic and can’t wait for Gearbox to fuck up again to release this new version you can install High Resolution mod and play right now - http://hrp.duke4.net/ .

Duke 3D has got to be the most packaged and repackaged and sold in different SKUs ever, right?

I kinda want this.

At the risk of threadcrapping, I have to admit I’ve never “gotten” Duke Nukem. I played the freeware levels of 3D so many times because my friends loved it so much, and it just seemed so lame to me. The weapons, the levels, the enemies, it just all felt tired to me. I wish I understood, or could make myself like this more. For reference, I also didn’t care for Quake but loved Doom. Maybe I just secretly hate 3D games?

Can’t wait to play some multiplayer Duke! Got my 10base2 network card and IPX drivers ready to go on a bootable floppy! I just need a y-connector to plug this BNC cable into the Internet. Who wants to be the terminator?

The new episode contains nine new levels (including the secret one), it has the rewind feature from the 360 port, a new enemy type called Firefly (they look tiny but when you approach they’ll expand into big monsters and attack with flames), a new weapon from the original code called the Incinerator, and the campaign game includes a node-based developer commentary.

The new levels are developed by the games original level designers, Levelord and Alan Blum, and the new music tracks are from the composer behind Grabbag, Lee Jackson. The only thing missing are the games expansion packs: Duke It Out In D.C., Duke Caribbean: Life’s a Beach, and Duke: Nuclear Winter.

Can’t wait to play some multiplayer Duke! Got my 10base2 network card and IPX drivers ready to go on a bootable floppy! I just need a y-connector to plug this BNC cable into the Internet. Who wants to be the terminator?

Duke 3D has got to be the most packaged and repackaged and sold in different SKUs ever, right?

My guess would be that Half Life would claim that (dubious) honor. In addition to the official mission packs being folded into the main game, a number of different SKUs were released that prominent featured the popular (and free) mods of the moment. (Team Fortress, Counter Strike, etc.)

Look I know it’s all cool nowadays to hate on Duke Nukem, but this game was the shit back when we were young. Had no interest in DNF, but I’d totally buy this to play coop with a pal :D

I played about 30 minutes of the port that came out on the Vita(think it was a PS Plus title). Just don’t think it holds up. Just one of many games IMO that was very much a product of its time.

(stupid character counting script, it just leads to people putting crap like this on the end of their posts :()

I think it still holds up today…very well in fact. I tried the HD mod about 2 or 3 years ago and had a real blast playing it (I’ve also played the game when I was younger so the added nostalgia was icing on the cake). Controls, responsiveness, speed and precision of movement are still so far ahead of modern games that it’s almost unreal.

Loved Duke 3D way back. It wasn’t technically as advanced and impressive as Quake, but its singleplayer campaign at least had some sort of level narrative and flavor to it rather just than running from one generic dark place to the next. It also supported coop right out of the gate. We preferred its multiplayer in LAN sessions due to the weapons (shrinker, freezer, laser mines) and jetpacks. Quake didn’t get really interesting for us until mods came out.

I think Heroes of Might and Magic had even more repackaging. There were 2 expansions, the second one didn’t have many features of the first one like random maps. Complete Edition with 2 expansions. Then there were Chronicles packed as 2 campaigns per lot, 4 lots I think. Then there were other fuller full editions with Chronicles and fan maps. And then it was included in various franchise packs. Finally today we have HD edition.

Although it’s a real blast from the past to see Levelord’s name again!

Haha, I think the last time I saw Levelord’s name was when SiN Episodes released, which would have been around the same time you visited 3DR’s to check out Prey and DNF. It’s crazy to look back on that Dallas FPS scene in the late 1990s and early 2000s, with all their .Plan wars and staff defections. On Twitter and certain message boards, at times you can still some see lingering resentment over stuff that happened 20 years ago!

Gearbox posted a preview of Alan Blum (the only guy to stay with Duke since it’s inception, including all of DNF’s development) and Levelord’s maps.

“Moscow is my favorite level because I live here now,” said Gray. “For quite a long time, I said things like – ‘Someday I will find a beautiful woman and move to Russia…’ nobody took me seriously! In fact, if you look closely and in the right direction at the skybox, you can see where I live. I planted many personal messages such as the names of stores and restaurants of my family and friends here. I even had the artists replicate my brother-in-law’s storefronts on one street.”

Some sad news to share. Former 3D Realms artist Steven Hornback passed away on Saturday. He worked on the first four mainline Duke games, Shadow Warrior and Prey, and also designed he original 3DR logo. He was 62 years old. :(

Hornback, who passed away Saturday at the age of 62, is best known for his work at Apogee Software/3D Realms on everything from  Duke Nukem II  to  Rise of the Triad  to  Shadow Warrior . 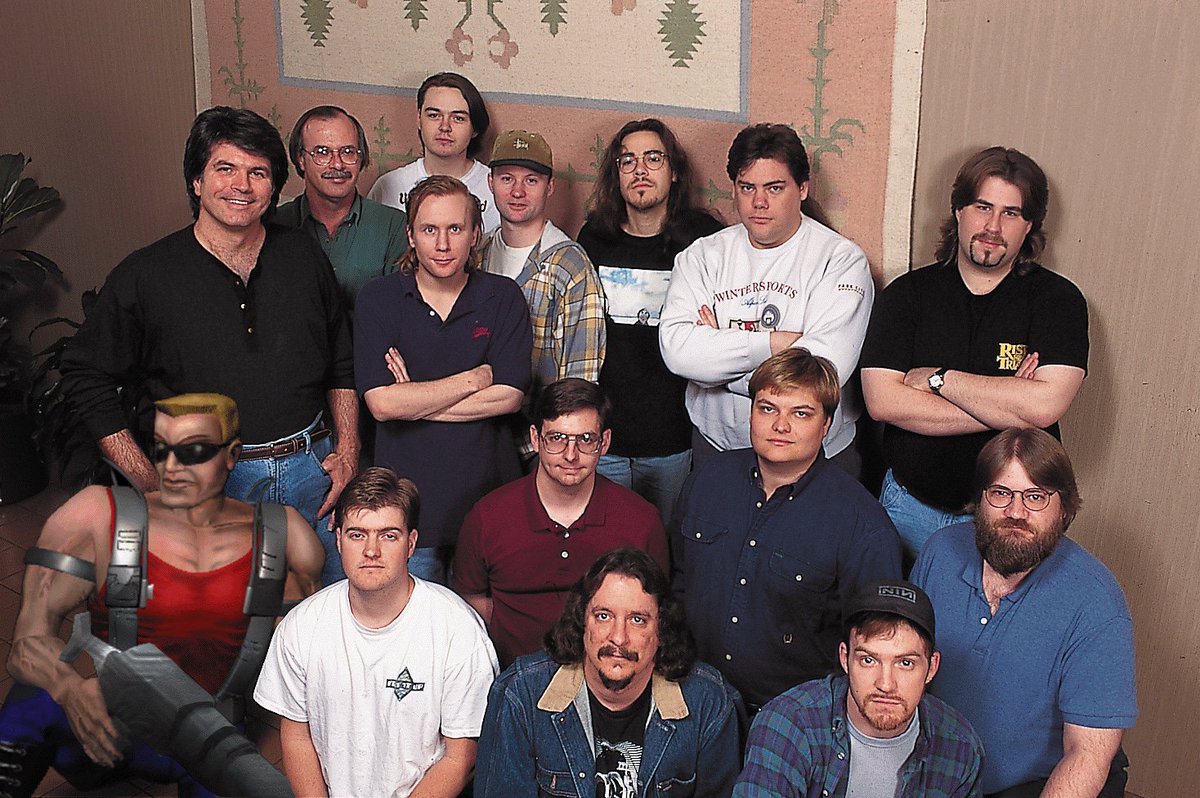