I would buy another Android device for testing these days, if they weren’t all so crap for 2016 because Qualcomm just absolutely sucked total balls at everything CPU-wise in the last 18 months… and every Android device apparently uses a Qualcomm CPU design. 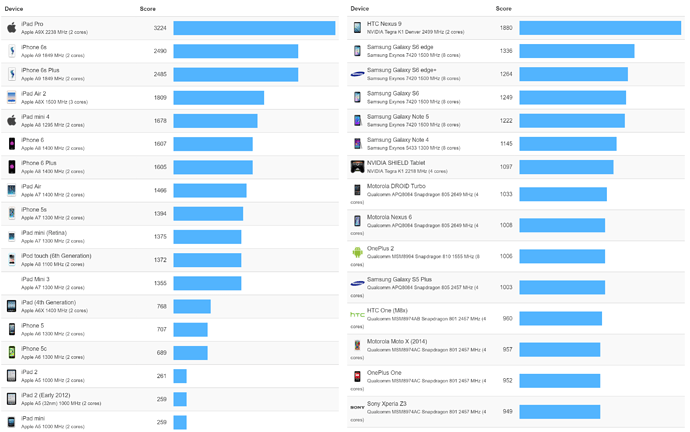 It’s not even a damn contest at this point. Android is in the toilet, performance wise. Outside of the Nexus freakin’ 9 on that oddball Nvidia chipset which everyone hated, and nobody bought (but I did), the “best” performing new Android device is about the same at per-core performance as a god damn iPhone 5s from 2013.

Sorry for the rant. It’s a problem. cc @stusser who believes Android devices are “fast enough”. Uh, no my friend, they ain’t.

I looked up the Snapdragon 821 which will ship soon, and it’s a whole 10% faster than the 820. Which means maybe 1450-ish in the above scores, putting it at still-not-quite iPhone 6 levels.

Until 2017 there’s just nothing significant happening for Android. Meanwhile, the iPhone 7 is coming this year, and I bet you dollars to donuts it’ll do a whole HELL of a lot better than 10% faster than the already redonkulously fast iPhone 6s.

If you wondered why Google was suddenly chomping at the bit to make their own mobile CPUs, now you know why. Qualcomm is tragically behind at this point.

TL;DR buy a god damn iPhone. The Apple Premium is well worth it given the stupidly fast level of performance you’ll get, which happens to be completely unobtainable on the Android side even with infinite cash in your pocket.

I looked up the Snapdragon 821 which will ship soon, and it’s a whole 10% faster than the 820. Which means maybe 1450-ish in the above scores, putting it at still-not-quite iPhone 6 levels.

Wait. I researched this just now (not sure why the Android numbers from primatelabs don’t include this, e.g. they use Galaxy S6 but not S7 at all, even though it was released 4 months ago) and the OnePlus 3, which uses the Snapdragon 820, scores ~ 2400 on the geekbench single core test.

So, new TL;DR advice: buy an iPhone 6s, or a OnePlus 3. The rumored new Nexus device coming this year with the Snapdragon 821 should also be solid.

So I’ll buy that, when it’s available from Google.

I’m an Android developer by day. My company is currently working with these guys, whose flagship product is pictured on the front page there: a handheld x-ray gun which identifies metallic alloys by the fingerprint of the x-ray fluorescence generated when the component elements are excited by the energy from the gun. The screen is actually a bog-standard 2013 Nexus 5; buying a big stock of old phones is way cheaper than buying rugged hardware or designing a custom board. The math to do the analysis is pretty far over my head, but it does take a second or two longer than it does on a desktop computer. That said, it’s fast enough, and it’s certainly the fastest mobile option (or was, at the inception of the project).

Anyway, that’s a roundabout way of acknowledging your point—that an Android phone is not particularly speedy—while, at the same time, expressing my hope that you aren’t complaining that Android phones are too slow to run Discourse, whose ultimate purpose is to render text to the screen. :P For what it’s worth, neither my old Nexus 4 nor my current Nexus 5X have trouble. I haven’t tried on my super-old tablet, because that’s mostly a movie-watching device nowadays.

I myself really don’t follow specs on phones, hell… truthfully until this thread I never bothered to search and find out that I had a 6 core cpu in my Nexus 5x.

And yeah I agree with @Fishbreath, that is does seem fast enough. :p

Perceived performance matters, not benchmarks. I picked up that Moto G4 as a toy for $124. It has a snapdragon 617 which scores a whopping 700 on single-core geekbench, the same as an ancient iPhone 5. But it feels snappy. Performance is completely acceptable to me, and it loads up this Discourse forum just fine.

It is instantaneous like my iPhone 6s+? Obviously not. But it’s completely usable as a primary device-- for $124. One seventh the cost of my iPhone 6s+.

On a side note, the 6s+ benches a whopping 55% faster than my old 6+, and the performance difference is nearly unnoticeable there. The doubled RAM, on the other hand, is huuuuuuuge. You can’t miss that.

Yeah, I’ll take the better memory on most decent Android phones over higher CPU speed any day of the week. My Android phone runs perfectly fine and it multitasks without complaint, which I can’t say for my iDevices. For tablets, sure, Android devices suck. But they’d suck even with better CPUs.

It sure would have been nice if OP had deigned to mention where that chart came from, or even how the scores were calculated. So I’ll just note how disingenuous it is to fixate on per-core performance when the path forward for years now has been adding cores, not cranking clock rates. Yes, the Galaxy S6 and the iPhone 5 individual cores have comparable clock rates, but the S6 has an 8-core CPU, while the iPhone 5 only has a dual-core CPU.

Well he cares about single-core performance, because that controls how Discourse performs. But again, that snapdragon 617 loads up Discourse just fine. Of course they probably went to heroic efforts to optimize their code for that to happen, but it was obviously achievable.

But I don’t get why Samsung of Android phones keep on upping their number of cores? Is it for gaming?

Android does the work for all of those except running scripts while browsing on multiple threads/cores.

Obsessing over benchmarks is weird.

I mean, I’ll happily grant that iPhones are generally faster than even high end Android phones in most use cases. But who gives a shit? There is no world in which that increased performance is worth all the Apple lock-in, actively offensive business practices, shitty Goggle integration (and laughable Apple replacements for those services), and $400 up front.

TL;DR buy a god damn iPhone. The Apple Premium is well worth it given the stupidly fast level of performance you’ll get, which happens to be completely unobtainable on the Android side even with infinite cash in your pocket.

What can’t I do comfortably on an Android phone that requires an iPhone’s superior per-core performance? I don’t seem to have a problem browsing the web, using Facebook, or watching videos. Every game that I actually want to play on a mobile device runs fine on my tablet and phone. “The Apple Premium” is very substantial in a lot of cases, and I wouldn’t even consider buying into it based solely on “performance!” benchmarks.

You could say “future proofing” but considering just how much more expensive Apple’s products are, that would have to be a shit load of future proofing to offset the cost, and I’m not seeing that. You could say “high end gaming” but I have no interest in playing AAA games on a cellphone or tablet. I have a capable PC for that (a PC that probably cost about as much as an iPhone 6, amusingly).

I don’t always agree with stusser, but when I do it’s apparently about Android devices being “fast enough”.

Those performance metrics seen kind of weird, as they are seemingly ignoring the best available Android devices.

They don’t include the pixel c with the tegra x1? Which is generally considered the single best Android tablet on the market?l

Now, i guess this thread is focused on per core processing, but that seems kind of silly to me… i mean, the snapdragon 810 has eight cores. Measuring an octo-core processor as though it were a single core seems silly to me. Given how Android works in the real world, multicore performance matters.

I have a Galaxy S7 Edge and an iPhone 6s Plus on my desk. From a usability standpoint, I absolutely don’t find the iPhone to be a better performer, in terms of snap and feel. In fact, when I launch in and out of chrome, the iPhone max/minimize animation always stutters, which doesn’t happen on the GS7. This forum loads quickly on both devices. I CAN’t put a chrome web shortcut on the iPhone, only Safari. Safari isn’t where I want to be in terms of my sync’d bookmarks, user profiles, etc.

Both devices are amazing, but I personally find the iPhone buggy as all get out. On both my iPad and the 6s phone, it’s extremely common to attempt to update apps, and the update just stops. I tap on update a dozen times and it starts / quits constantly. Also iOS Lastpass doesn’t auto-fill any old random app unless the app has been coded to hook in, whereas on Android it either pops up when it detects the login, or can be invoked w/ a quick swipe on the notification shade to fill in every single app or web page I use. So many Apple-way-only annoyances. Try to get a simple MP3 file as a ringtone on either device.

There’s a reason my SIM is almost never in the iPhone.

The problem with buying an iPhone over an Android device is that at the end of the day you have an iPhone.

Obsessing over benchmarks is weird.

I mean, I’ll happily grant that iPhones are generally faster than even high end Android phones in most use cases. But who gives a shit? There is no world in which that increased performance is worth all the Apple lock-in, actively offensive business practices, shitty Goggle integration (and laughable Apple replacements for those services), and $400 up front.

I was using a Galaxy S until January of last year. Not S4, S5 or S6, but the first generation. Because the physical keyboard was far more impactful to my ability to use my phone in the ways I value than performance. It finally hit a point where it was too far behind the curve to be sustainable, but it took years. So, yeah. I’m not going to deal with all of Apple’s bullshit just for better performance on a device I mostly use to text and browse forums/Facebook, where that barely matters one tiny whit. If they introduced a physical keyboard, I’d probably be there with bells on, but they’ve never made a phone that had one and I don’t see that changing when even the rest of the market can’t be bothered. :(

(I do have an iPad because for what I use tablets for Apple has actual advantages, and performance does matter. But that’s not the case when it comes to phones.)

To add on to tangential mobile OS rants, here’s the update bug that constantly plagues the iPad Air 2, iPhone 6s and pretty much every iOS device I’ve ever used. I eventually get updates but on the capricious whim of the Apple device.