Simple. They’re not making enough money. Whatever you need to attract whales isn’t there, causing the model to collapse.

Apex has a dramatically higher skill ceiling than a game like fortnite. It may just not be feasible, long term, as a f2p battle royale game, because it doesn’t have the same appeal to the vast, unleashed masses of little kids.

They should have just made Titanfall 3.

It may just not be feasible, long term, as a f2p battle royale game, because it doesn’t have the same appeal to the vast, unleashed masses of little kids.

It’s too bad, because the devs at respawn are easily, EASILY, the best in the industry when it comes to shooters. And Apex is an excellent game.

But at the same time, I’m not giving them money.

Not because i don’t think they deserve money… They do. But I don’t have any desire for the cosmetics in Apex. Some are pretty cool looking… But i don’t care enough to pay the prices they are asking. If they were a buck each? Maybe.

Back with Titanfall 2, i actually gave them a decent chunk of cash for Titan skins, just because i never even paid full price for that game, and it was the best shooter i ever played. And the Titan skins were cool looking.

The devs at respawn are geniuses… Their marketing team is bush league.

It’s too bad, because the devs at respawn are easily, EASILY, the best in the industry when it comes to shooters. And Apex is an excellent game.

But at the same time, I’m not giving them money.

They would have got $60 from me for Titanfall 3. Apex is just a waste of my gaming time, but I’m glad others have enjoyed it.

They would have got $60 from me for Titanfall 3. Apex is just a waste of my gaming time, but I’m glad others have enjoyed it.

I debated for long time wether to buy a season pass. I don’t care about cosmetics, but I also wanted to support the devs. So I finally broke down and bought season 2. I don’t regret it, but I’m not going to keep buying 40 dollar season passes either. That said, Apex is easily my favorite shooter and game at the moment. Until it’s arrival I was in a real gaming slump, I just couldn’t get into games. They just weren’t holding my interest like they used to. Didn’t matter how good they were. I would get bored before I could get started.

I bought the first season pass, but then earned enough coins throughout that season to buy the second season pass for free, which was cool. 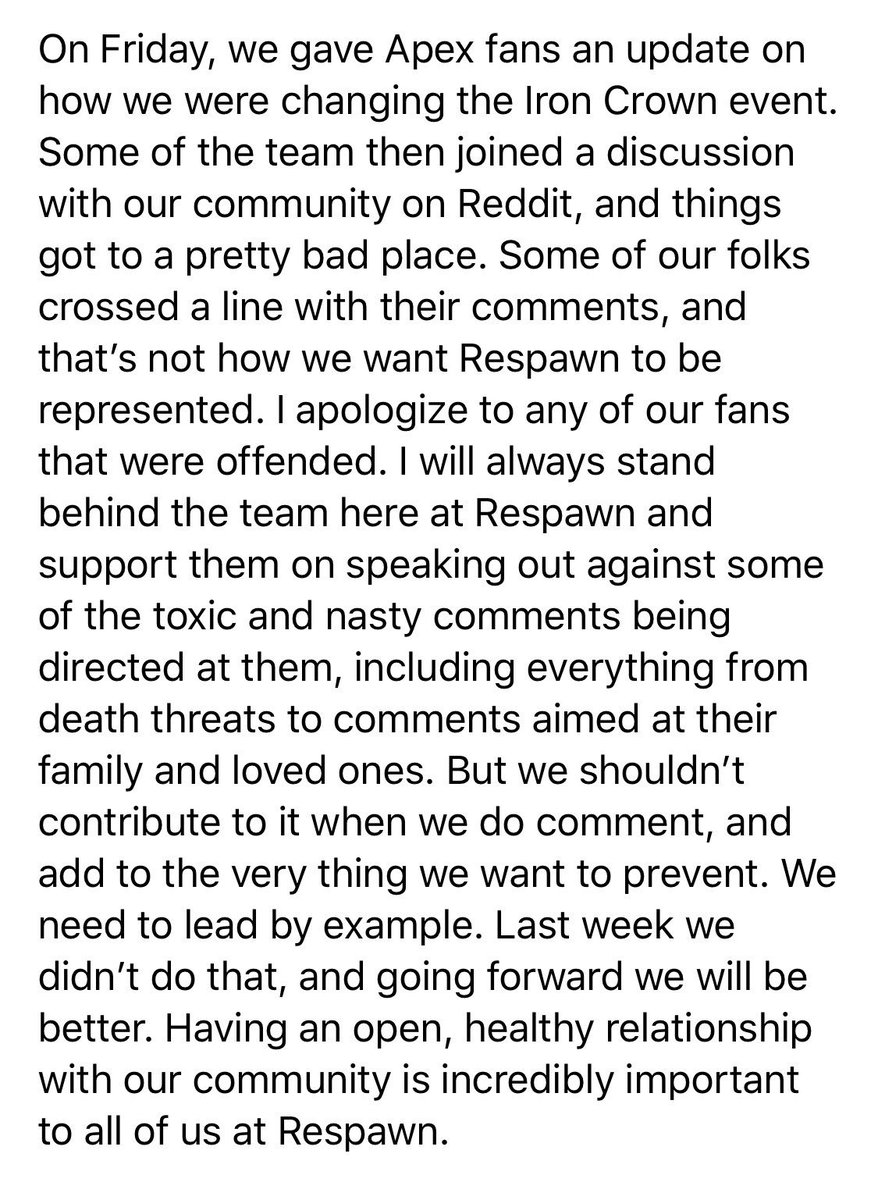 Since I started playing some games on the Xbox One again, I decided to give this a try on there. The first thing that was super noticeable is that it’s definitely a step down graphically from the PS4 Pro I played on the majority of the time. I wouldn’t expect it to look as good as that of course, and certainly not the PC where I’ve also played a little, but wow, it was noticeable.

That said, I adjusted and was playing just fine last night. I also opened up the field of view which is just way too tight on the default setting. I can’t be the only one that does this? I get motion sickness if I don’t do that. :P~~~~~

Starting over at Training was kind of cool. I messed around with all the guns in there a little bit and with headphones on, it was also really noticeable that the sound effects are crisper and clearer on Xbox. I have to go back to PS4 again, but it really stood out. Maybe it’s something to do with the headphone jack on the PS4 controllers? Maybe Xbox uses better quality samples? It really did seem better. I noticed a few other little details that are different. Xbox doesn’t drop entire stacks of ammo all at once yet which I think is now default on PS4. I’m a “Button Puncher” and the most notable thing there is the reversed d-pad placement on the Xbox controller. I was moving my thumb up to find up on the d-pad to use healing/shields and of course the d-pad is located below the stick on Xbox. Whoops!

The final notable thing is that player matching is obviously taking level into account. I was being matched up with lots of n00b players and got a win in my third or fourth game. Many players were moving at a snail’s pace and not sure what to do. One fellow who did have his headset on told me it was only his second game. I felt like I was running an in-game tutorial in each match. That was kind of fun. Dunno how much more I’ll grind on this version, but it was cool to see all the differences. Definitely makes a case for an Xbox One X and showed how low powered the original Xbox One really is.

They’re adding some interest from the Titanfall setting…

Voidwalker event going on now too

So, I’ve been playing during this most recent event, and the new game mode, “armed and dangerous,” is awesome.

Weapons are restricted to only sniper rifles and shotguns. Armor is limited to only white armour, and it’s very rare. Ammo stacks are limited. Gold weapons show up with more frequency.

The net effect is a more tactical game, with a faster time to kill, and less dependency on who finds better loot. So, you have less situations where you are only wearing white armor and run up against a team with purple armor who have a significant advantage over you.

I’ve enjoyed it a lot, and would recommend it.

That mode is excellent. I had a ton of fun with it last week. I hope to play more later this week.

Have you noticed that today the AI voice that says round 1 sounds as if it is being hacked. Awesome tease/setup for season 3

Ha! That’s cool! I will have to play a little tonight.

Apparently I was right.
Watch the score board when you’re not being shot at.

Failed hacking of Apex Legends map may be biggest Crypto teaser yet |...

A massive new Crypto teaser has appeared in Apex Legends.

Season 3 is here and the brand new map is very cool.

I played a lot last night and got my first win of the new season. They’ve made a bunch of changes to the weapons that I think have really changed the game when it comes to longer range conflict. 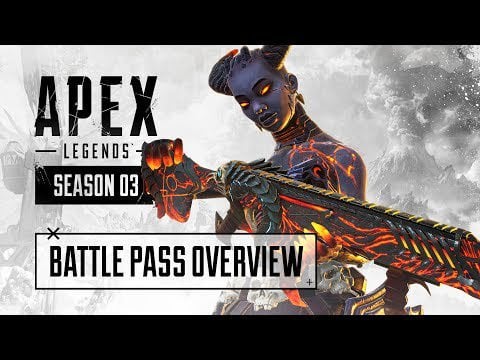 It was notable that it’s harder to melt people with the R99 pre-mag upgrade. The start of matches is a lot more unpredictable now from what I found. A couple times I thought I had someone, that bit of randomness in the recoil probably caught me out. I enjoyed the Hemlok a lot more and was not at all averse to picking that up and using it. I love that the Charge Rifle is in now as it’s a totally unique Titanfall weapon that has really no analog in other games.

As for the map, it’s a wonderful colorful change of pace from King’s Canyon. World’s Edge has some cool rolling hills and some unique urban areas that feel a lot more like Titanfall’s maps but are clearly tweaked for Apex. I played a lot of Pathfinder and that was a damn good time zipping around the buildings. It’s still not quite pilot worthy movement, but there are a lot of interesting places you can get to. The snow/ice areas look fantastic and “cold” while the lava areas give you that “hot” sensation that great artwork can do, and of course it still seems really alien in appearance. It took me quite awhile to get comfortable with where I was in relation to the rest of the places on the map, but that takes time to learn. I also love the train! Holy crap was that fun to have gunfights on while it’s moving.

So far so really good. The new Legend seems cool although I did not buy him. Lots of others did and he was super useful for battlefield awareness, which IMO is still the number one thing you want in these types of games. I also like the new dialogue the characters use if you get third partied and that there’s a lot of talking in general. That’s something that’s so very welcome coming back to this after Call of Duty. Pinging map locations and context sensitive pinging is just plain genius still.

I’ll be playing a lot more. They can bring back King’s Canyon somewhere down the road. It’s fine to totally change the map as far as I’m concerned. In some ways it’s like a whole new game again.

Just posted in the other topic, but yeah the game is very different. I didn’t like how big it was at first, but I think it will be great for beginners. If you didn’t like the game before give it a shot now.
Definitely changes the meta. Caustic is now almost useless. Love Crypto and my girl Wraith cleans house. I average 1 -2 kills a game. Last night I was averaging 5-7 and won champion a lot. Like A LOT! Love the color. Miss the smaller map, but I think this map is how they will justify someone dropping in a Titan when it is added.

Some questions I have:
When will the vault be able to be accessed? Is that 7 day counter for real or can you access it now if you hit the cargo bot correctly?

In the train yard some cargo container popped up from the ground. Was there a button someone pushed to make that happen?

I saw something in game about there being keys to the vault. Is there only one vault? More than one? I wasn’t sure. It seemed like it was something you could find in every drop?

I was getting more kills last night than normal, which makes me think they’ve tweaked the aiming a bit. I don’t know that I got that much better?

I have not seen that cargo container but it’s possible there’s something like that.

As for the meta, I guess that depends on where the final fight occurs on a map? Caustic is still a tough out if you have to fight him indoors, and if the circle closes on a city area, that could get hairy. Also, the cave with the vault is a death trap if you have him.

I definitely appreciated the seemingly larger size of the map. Is it really bigger or is that we don’t know the map itself yet that makes it seem larger? I did like that there are some places you can land that seem a little bit safer in general to get a start. That’s vital given how there were about four hotspots on the last map that people could not help but land at over and over again for some reason. Maybe that will coalesce as the season wears on though?