So, let’s talk Avorion. Or maybe not. Maybe I’ll talk to myself all by my lonesome in this thread! I know resident Space Man @BrianRubin is familiar with the game so maybe he can chime in.

I played this game about a year ago but I didn’t really try it much. Everything is constructed from blocks and you start out mining asteroids also made of blocks. Felt a bit much like punching trees in Minecraft but in the vacuum of space and I was frankly sick to death of various Minecraft clones, so I didn’t really play much past the tutorial and kind of forgot about it. I didn’t circle back around to it until I read a few interesting comments about the game in the X4 subreddit. I’m really glad I did, because the game is so much more than “Minecraft in Space”.

First, lets talk about blocks. I think blocks and I think the lo-fi Minecraft look, but you can actually do some pretty spectacular things. Look at some of these ships people have come up with:

There’s your Star Wars and Star Trek recreations, of course: 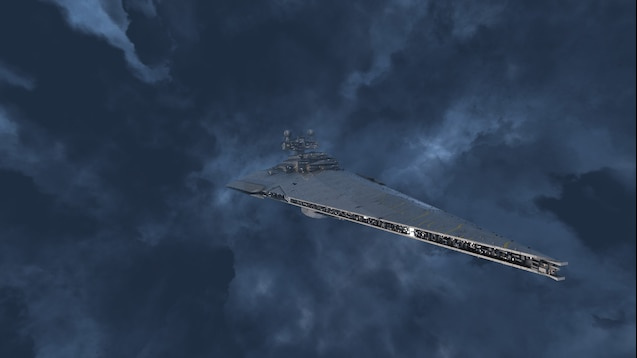 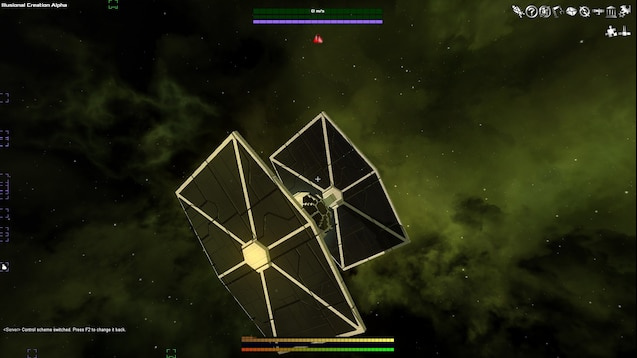 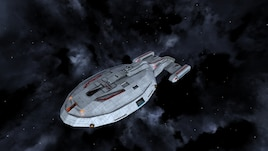 Some EVE fans out there too: 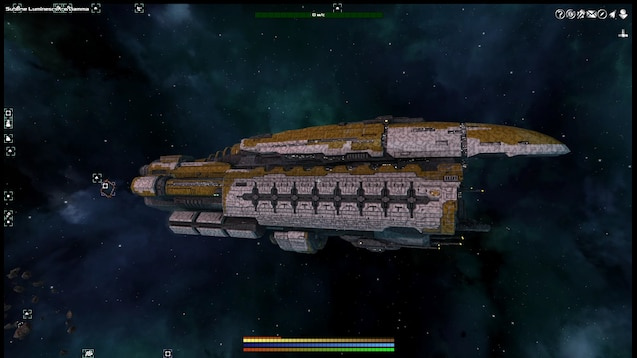 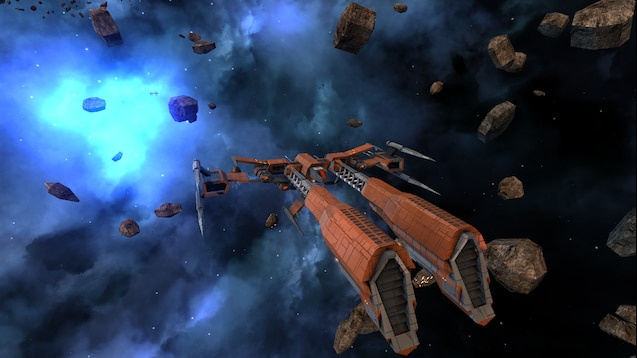 And plenty of (as far as I know) originals: 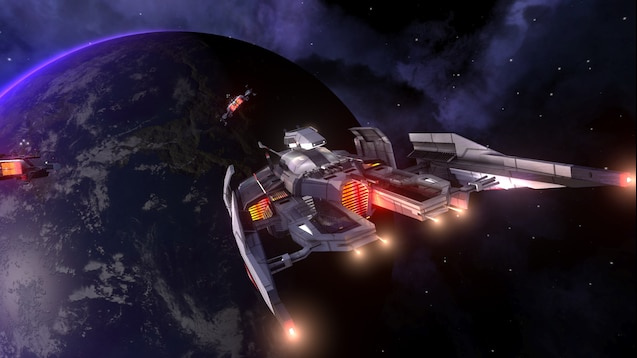 Point being, you can do way more than some Minecraft-esque blocky LEGO looking ships. Well, unless you’re me then that’s all you have the talent for, but the good news is all these ships are available at the click of a button via the Workshop.

The design of ships is far more than just cosmetic, as well. You’re placing ship components like engines, thrusters, turret mounts, energy generators, hangars, cargo bays, crew quarters, you name it. These ship designs you can download aren’t cheats or anything, they have a build cost in resources and credits. But if you meet those costs, you can simply apply a template and build your ship. These just allow you to bypass designing your own ships for people like me who suck at it and/or just don’t want to invest the time in this area.

Now, onto the more important stuff of why this is a lot more than just a Minecraft-esque builder. The game shares some similarities with games like X4 in that you can own fleets of ships with AI captains, you can engage in trade, piracy, build your own space stations and factories, or join factions in their wars with each other. The galaxy is populated by various empires and pirate lords to contend – or ally – with. There’s also an alien threat lurking at the center of the galaxy, which you want to start working your way towards. Because you start finding rarer resources the closer you get to the galactic core… if you can find a way to survive there.

You have various different ways of making money in the game, many of them staples of space games. You can be a trader and look for profitable trade routes. You can grab some mining lasers and build your fortune as a rock hopper. You can strap on some salvaging lasers instead and be more of a scavenger; you can find some lucrative wrecks from battles between factions, pirate attacks, etc. You can also explore, finding hidden stashes, claiming station-sized asteroids and selling the rights to factions (or keeping them for yourself and build your own base), or investigating various distress signals and other things you might find. Just make sure to upgrade your radar to detect more kinds of signals!

I’m glad I circled back to this game because it has some elements of what I enjoy in the X series of games which is the “Mount and Blade in space” kind of stuff. I’m absolutely hopeless at designing my own ship from scratch (I have no talent for visual design in general) but all the designs on the workshop have been great. I can see the costs of those ships and work towards them like I would if they were built and designed by the game developers. And while I can’t design a ship from scratch, I can modify something I have to work with! Maybe I need to expand a cargo bay here, or maybe I want to move some turret hardpoints around.

With all of that, I’ve found the ship design/customization to be a really compelling part of the game. Adding a bunch of armor sure makes you tanky but my goodness does it make you accelerate (and more importantly, decelerate) slow. I may or may not have lost a ship after slapping on a ton of engines to my armored brick while neglecting to factor in the need for sufficient reverse thrusters and inertial dampeners. The station I may or may not have run into probably still has a Kevin-shaped crater in it.

Anyway, I’ve found it to be a pretty fun game so far and totally not what I expected when I first looked at it. And bonus for me is that it supports multiplayer as well, so I’ve been able to explore the galaxy with a buddy of mine from time to time.

Can say Avorion is great.

I’ve had this on my wishlist from since it was in early EA. Everything about it looks great. Now that it’s out of EA, I’m just waiting for a decent sale to pick it up. Hopefully the Steam summer sale is soon.

I am guessing that you do not land on worlds to explore them, right? Any mining is done to asteroids. So this seems to be a standard space game like X3 except you custom make ships block by block, right?

I watched the videos, but they all seemed to be just building ships or ships shooting things.

No landing on planets, it’s all in space.

Please, let’s not use X3 as the standard bearer for the space game genre. Please.

In this case the X games are a pretty decent comparison, though. Not that it’s a clone or a X3 “spiritual successor” or anything but it has a lot of similar features: being able to build your own stations, command fleets of NPC ships, invest in an economic infrastructure / production chain. It plays quite a bit different than X but the feature list has a lot in common. As a huge fan of the X games, that’s a good thing for me. :) Definitely substantially easier to get into and more arcadey / action than X, though. Given that both studios are German, I wouldn’t be surprised if X provided some inspiration, at least.

Were Albion Prelude the template for space games, the genre would be in a much better and more interesting place. ;)

My kid will LOVE this. Bought him X4 but it’s too large and complicated for him.

How does coop work exactly…would I join his game or is there some kind of server that we can set up on one of our computers and play in that? Can’t wait to tell him about this tomorrow.

Well…bought it, played the tutorial. Was put off a bit by the simplicity of the ship and flying but after doing the tutorial, love it! Can see so much potential for fun…now if I could just get my kid to play it without creative mode…that’s all he ever wants to do in any game, creative, which I hate. Cool game, thanks to the OP!

Tempted to pay 26 bucks for 3 months from their online server partner…don’t have a computer at home to leave on all the time…is that a bad idea?

So… How does coop work?

You can just connect to each other via LAN or internet like most games, no need for a dedicated server with just the two of you unless you want to play in the same save/galaxy at different times. Just go to multiplayer, host, and he can join via Steam. If you have an extra PC in the house you can always run a dedicated server as well.

When you get in the game, make an Alliance and invite him. You can also invite him to a group and off you go. The alliance is like having a “guild” but it’s super convenient because you can drop resources, equipment, and credits into shared storage from anywhere.

Oh, and they’re working on providing some free online servers for the community as well if you want to do that. There will be PVE and PVP servers. Not sure how soon that will be available.

with just the two of you

Can you play with three?

Yes. I’m not sure what the max players is, if there is one. Likely depends on the hardware capabilities of the server (server being your own PC you’re playing on or a dedicated one).

Thanks for bringing this up. Apparently I bought it 3 years ago and had shelved it as it was alpha at the time I think. Glad to hear it’s looking good. So is this final release then?

So is this final release then?

Yes, it’s been out of EA for some time now.

Well a month or so, so not THAT long.

What? A month is FOREVER (when in covid lockdown, anyway).