Well we have a revealed Cylon about to take a turn so best to thwart whatever would hurt the most. We need to protect Fuel, so that’s either taking out the raiders or the basestar (which might get lucky and plug a fuel spot on Galactica when Pegasus goes down). Not sure which is more important now, probably raiders I guess.

Actually I just checked my hand, I can delegate if anyone has something better else to do. Chime in within the hour!

Otherwise likely I will try to blow up the 3 raiders in 2. That’ll bring the chances of Galactica damage to 50% for basestar bridge activation.

Oh yeah, missed it. Okay, I’ll move to hangar, get on my trusty hotbox assault raptor over to #2 and play 3MF. (CAG another viper to 4 in between) Don’t have an appropriate card without overkill to use my action, but odds should be good.@CraigM

Sounds like a plan. You do your best to eliminate the threat

Well 3 more shots can still do it 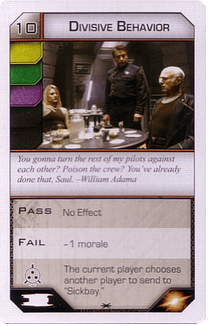 I am sure that everything is fine. @Lantz

What, there were two hits? I have apparently unlearned reading, which is pretty impractical.

I am indisposed at the department for the rest of the afternoon/evening/night. I’ve left instructions with @CraigM, I plan to contribute a moderate amount.

3 for me. Quantity > Quality

You guys think you got this? My cards are much better played, but I could add some. @rowe33 @Cuthbert (since Jorn is indisposed and added moderate amount)

I would think so though I’m probably contributing the least, based off Jorn’s addition. Figure he’s covering half or so.

Enough. Admiral Kat had seen enough. The back and forth, the bickering, the accusations. They were resource constrained, but not defeated yet. And always with the Cylon talk. If they wanted to hide, let them hide. Better to deal with problems they could at the moment.

And right now that was their precarious exposure to Centurions and Raiders. Zap the toaster later if needed, but right now deal with concrete reality.

Drunken bar fights, insubordination, and active undermining of perceived rivals had gone too far. Time to crack the whip. Should she drag the former admiral for acting out of his own interest? Should Dee get dinged for loose talk over the comms? What about the President, making him an example would send a message. All three had been at Joe’s bar the other night, and the murmuring could not go unchallenged. The people would catch on soon enough if they were allowed.

Total +12, pass. Bait places 1 civvie. Skill check ability present, triggering sickbay condition. @soondifferent choose who gets sent to sickbay, and who gets a Mutiny card (can be the same person, including you)

Sorry but I am going to wait for a board to consider my options.

@soondifferent choose who gets sent to sickbay, and who gets a Mutiny card (can be the same person, including you)

Also @Lantz one card only