Minis wargaming in the front yard!

The kids were playing with some plastic soldiers and fairies, so I plopped down some scenery and we made up a rudimenmtary minis game to pass some time. Ranged combat consisted of line of sight check, then each of them secretly thinking of a number between 1 and 5, and if they both chose the same number, it was a hit. Melee was 1 and 3. Special abilities were made up on the fly - Stormtrooper had armour, the mech shot multiple times, the sniper did double damage, the gorilla had a slam attack, fairy could fly, etc.

Luckily both my kids are super honest, so I am certain there were no shenanigans when comparing secret numbers! /s 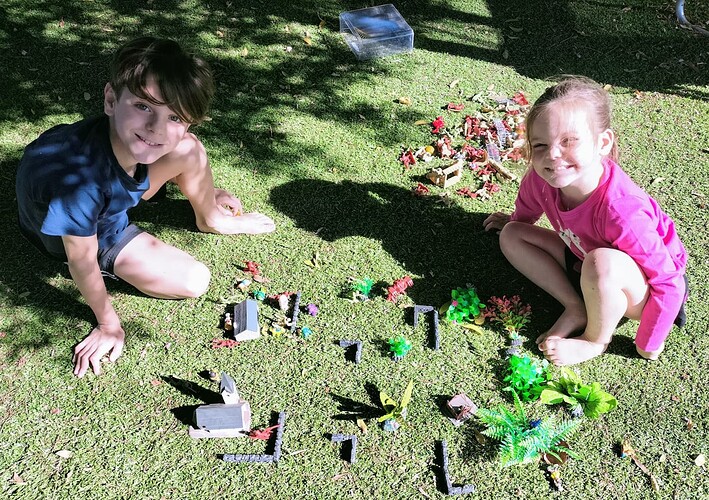 Luckily both my kids are super honest, so I am certain there were no shenanigans when comparing secret numbers! /s

It sounds like an interface issue. If I were doing development for the Sharaleo’s Kids Tactical Combat Sandbox, I would suggest combat requires both kids counting down to three and then holding up a number of fingers to indicate their secret numbers simultaneously. I tried playtesting this myself – easy to do with two hands – but I had a hard time not cheating.

Or perhaps writing down the numbers! But who wants office supplies when playing outdoors? Scratch that dumb suggestion.

Nevertheless, cuteness! The smile-nose-crinkling phase is the best.

That’s awesome. I remember Kiddo being inspired by our board game sessions to make up his own games with Lego pieces or random toys. It was fun watching his designs grow in complexity over time.

What an absolutely fantastic pic! That looks like the best time.

I know I am years late to the party, but I can’t say enough good things about Quacks of Quedlingburg. I’ve been getting my family to play constantly. The mechanics just work so well, with the way you can add variety to the game with the different recipe books. The rat to keep the game competitive if someone is having a bad run of luck. The fortune teller cards. I haven’t even dug into the expansions, but this is one of my favorite games ever.

If anyone is playing Dune Imperium: IX, there is a very very active community on the Table Top Simulator Discord. Search for TTSClub on Discord and it is easy to join. There is a dedicated channel for Dune Imperium and 4 player games starting every 15-30 minutes depending on the time of day with players around the world.

The Discord interface works great for LFG pick-up games or rounding your 2 or 3 person group up to a 4 player game.

Good mix of experienced players and people willing to teach the game.

Quacks is a great game, though I do suggest acrylic tokens or coin capsules. The tokens get pretty worn and don’t “shuffle” well in the bag.

I decided to order a retail copy of Massive Darkness 2 after watching a couple play through videos. Looks like a pretty fun dungeon crawl for chucking dice and taking names! I’m pretty excited for it to arrive. I got sick of using the app for Descent 2e so I sold my copy and am looking forward to a new app-less dungeon crawl.

I have my eye on some upgrade of the geekup kits or etsy has a surprising amount of options as well. The overall quality of the stuff isn’t great in my opinion - the fortune teller cards in my box are really low quality paper

Yeah, component quality on Quacks is serviceable, but nothing to write home about. Really the bag tokens were the only thing that turned into a gameplay issue though.

So I’ve finally gotten around to playing Gloomhaven and I don’t think I really like it very much. In theory it’s really interesting as some sort of EuroCrawl game, but I find actually playing to be a bit of a chore. Specifically having to pre select your action cards and do all that planning just feels laborious to me. I got halfway through my third game and quit since it was giving me a headache.

I’m a bit bummed since it’s so highly regarded I thought I’d love it. Pretty sure I’ll just end having to sell it at a huge loss or give it away. Oh well.

I sold my copy at a decent discount over the retail price.

If I had the space to leave it all set up and a group of friends who were constantly around my house so we could play often enough to keep sharp on are tactics but it would be good. In college I had the friend group. Now I could make the space. I’ve never had the combination.

Once the digital version folded in the original campaign, I gave my boxed set away. For free.
No regrets.

I keep forgetting to write about board games here.

Been doing a rolling play of Nevsky at a friend’s house. Full scenario. We finished the first year. The seasons are both the highlight and frustration of this game. Winter wasn’t too bad, but the rainy season left my opponent’s Rus stranded while I boated around taking control of more territory, including a city and two forts. It’s looking dire for him, even with a full year remaining.

Last week was a bear thanks to Arcs. It’s the latest game by Cole Wehrle / Leder Games, and a follow-up to Wehrle’s Oath. I’ve been playing both the single-session game and the “arc,” a three-session campaign. I won’t say too much, since I’m supposed to be writing about it now anyway.

So… apparently the pledge manager for Middara is open and you can order whatever you want. Although it seems cool (I have poked around at the Tabletop Simulator module for a little bit just to see what kind of a game it really is), unfortunately I don’t think I can justify it. It’s $200 for the base game, another $200 for “acts 2 and 3”, and there’s more expansions, add ons, and whatnot than I can figure out. The “gameplay all-in” pledge is $825. That’s… a lot.

Anyway, if you care: Preorder Middara: Unintentional Malum - The Complete Trilogy on BackerKit

I guess I should say, Middara is a 1-4 player cooperative campaign dungeon-crawler. The hook, I guess, is that the campaign is huge; the adventure book for act 1 is almost 500 pages.

Middara is our friends’ favourite storytelling dungeon crawler. It has overtaken Gloomhaven and other big box games they have backed for them. It looks really good, especially since they are painting the minis. But I don’t have the space or time to play it either. I’d love to though.

Yeah KS boardgames are getting farking expensive. The growing tendency has been to cram more, more, more into these and drive the FOMO hard. That and minis in everything. 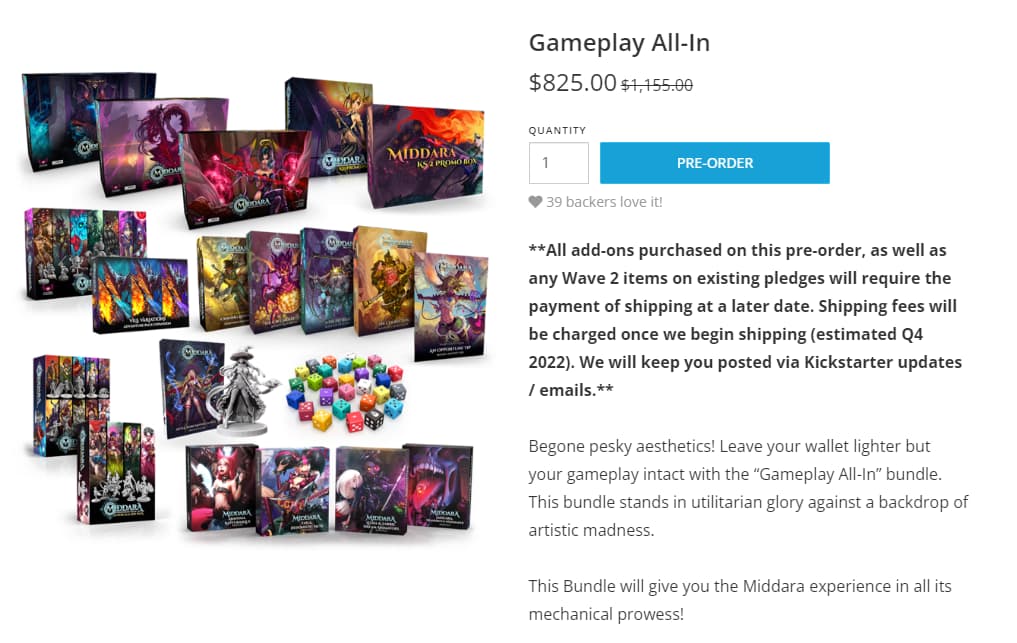 I’ve no idea what you mean. 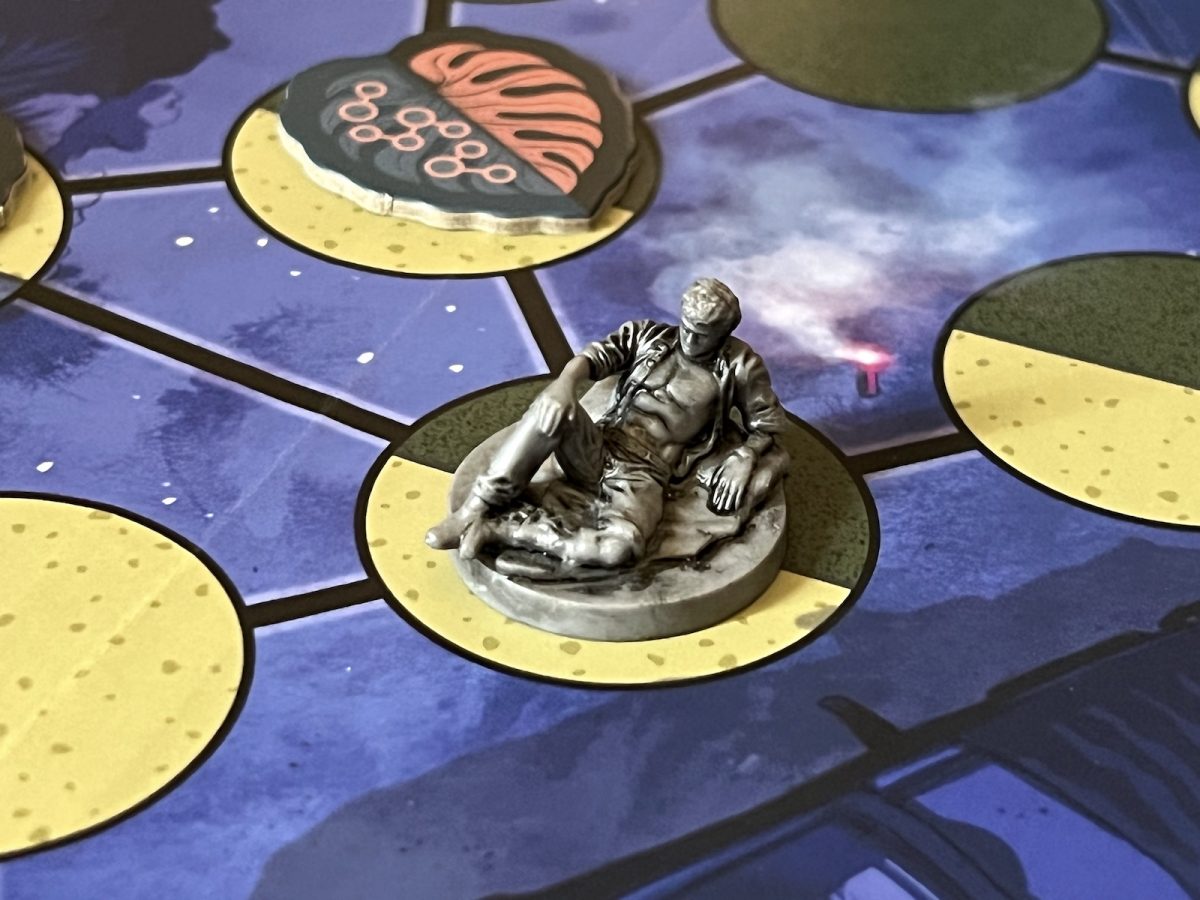 Last week was a bear thanks to Arcs . It’s the latest game by Cole Wehrle / Leder Games, and a follow-up to Wehrle’s Oath. I’ve been playing both the single-session game and the “arc,” a three-session campaign. I won’t say too much, since I’m supposed to be writing about it now anyway.

Can you give us a Thumbs Up or Down for the campaign? :)

The “gameplay all-in” includes almost 30 extra dice, $100 worth of resin kits with like four new cards you’ll never see, and a couple of packs of plastic versions of previous resin kits with the assembled cards from those. You at most want the Core Gameplay All-in, which is just the three campaign acts and some sidequest type stuff, which is what’s relevant. Don’t get me wrong, I originally got the prior equivalent thereof because I figured I wanted to be all in. Well, I’ve been playing it (on TTS, I’ve never even opened my copy, the TTS mod is just so nice) and it turns out the handful of cards in the resin kits could barely be more irrelevant and you’re just paying $30 for a fancy mini. Meh.

That is, they generally include an adventurer card (you don’t use these in the campaign, you’re always playing with a fixed cast that’s already in the box) sometimes with an ability or something that’s unique to that character, and like, one or two item cards that are extremely situational and probably not any better than what you’re already using in the game. The new ones might have a few things of slightly more utility but they’re also not in the plastic collected sets, they’re the original resin which, meh.

And I get it, $200 for that base box seems extremely expensive but just to point out, there’s an enormous amount of game in there. We’ve gotten probably a couple dozen sessions in on this sucker and we’re just picking up steam on the second chapter of five. We haven’t seen entire tiers of loot or monsters (in fact we’ve barely seen any of our current tier’s monsters). We’ve only opened a few of the dozens of hidden envelopes. Etc. Honestly, if I could guarantee any of this will be available again I’d say you could safely just get Act One and round out your collection later if you get that far. The whole thing is gonna be ridiculous.