Brian Boru Forum Game: The king is not dead 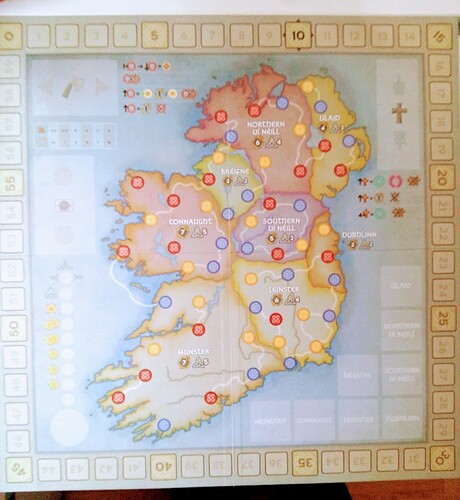 It is a card drafting, trick taking, area control game in a beautiful box: 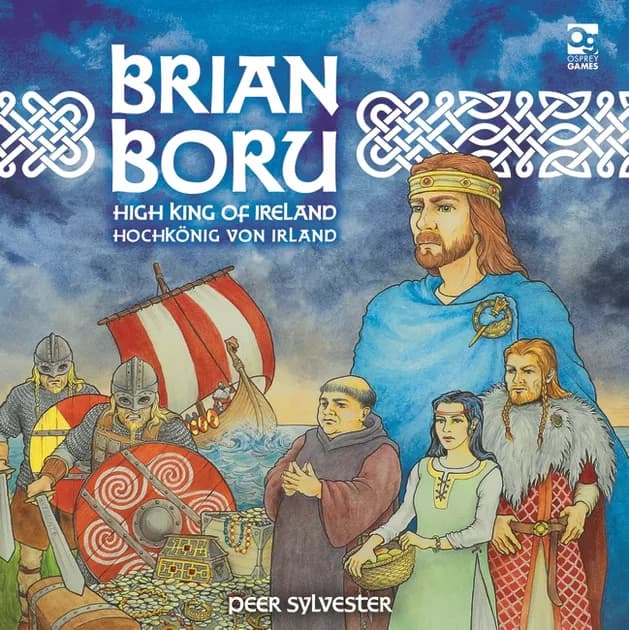 On the map, you can see towns/cities in 3 colors: red (war), blue (church) and yellow (marriage). There are 8 regions that will gift victory points to the player having the majority of towns in a region at the end of the game.

To the right, there is a church space, where a player can place influence to gain the majority and get as a reward a monastery ring that will upgrade a single town, making it count as 2 instead of 1 in the majority game.

To the left is the marriage track, where a player can arrange marriages. The spouse will bring a nice dowry in form of a town, victory points or money. The last spouse will always be Estrid, princess of Denmark. She will bring all viking towns as a gift.

Top left is the viking area, where the vikings are waiting to raid the land. You need to collect axes to slay the vikings. If any single viking is left alive, then there will be a raid where the weakest player will lose a town. Player with most kiled vikings (strongest) gets to decide, which town! After the raid, strongest player will get VPs for defending the land.

The player with the ring of power will place it on an unoccupied town and play the card of the same color (or a colorless royal wildcard). Cards range from 1 to 25. Other players do not need to follow suit. However, if you want to fight for the town, you need to follow suit with a same color card with a higher number.

Important to not that for church influence, marriage track or vikings slayed. The winner of the topic will lose all his progress (reset) but gain the reward. Other players will keep their progress for the next round.

These are the basics. Complete rules can be found here: 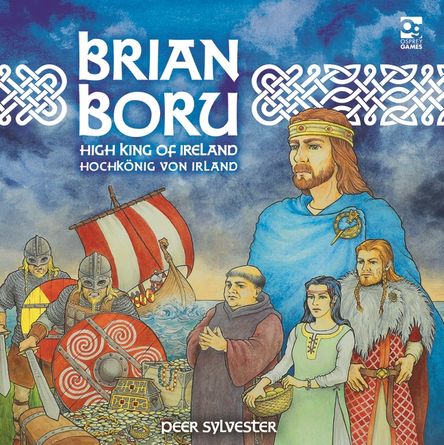 Who else wants to fight for the high crown of Ireland? 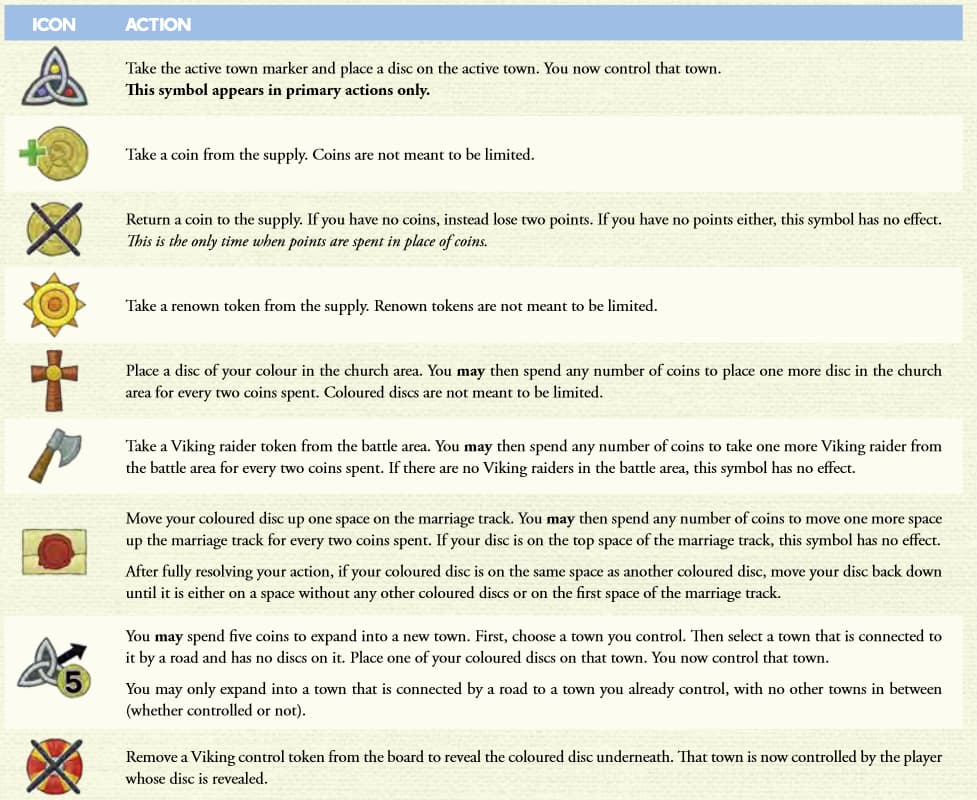 Suggestion: I will post all cards from 1 to 25 here as reference. How should we do the drafting?

At the start of each round, we are drafting cards (take 2 cards, pass the rest of the cards to the player to the left).

I could deal out the cards like this and use my split personality to forget them:

Then we do the drafting and reduce the list of cards by 2 and pass on the remaining numbers in a spoiler tag.

That would work! On discord, we have a card bot that handles it all. You = card bot.

Oh, but what’s ON the cards? I have my own deck, but Matt would have to look up what’s on the cards constantly from some kind of screenshot. That sounds nasty.

Brian Boru, card 13, exactly in the center of all cards. Also important to note, that only the Brian Boru card allows you to remove a viking controlled town!

I suggest to wait until later tonight, if somebody else wants to join. 2 spots are open. Until we do start the first drafting, requests for joining the game should be possible.

Not enough time to play right now, but I’m watching with interest.
I’m happy to randomise the start of the draft via PM if that will help. (I may be a bit slow until Monday though as I’m on holiday.)

@Dave_Perkins @Matt_W You guys know the rules? When do we want to start?

I can’t start until Sunday pm at the soonest. And I’ll need a little time to review rules and watch a play through.

it’s ok. Lets start on Monday. 2 slots are open for other players to join.

No other players are joining. We can have a nice 3 player game. Be warned, some of the bigger regions might not get scored because the trigger of 5 occupied towns will not be met.

Who goes first, will chose his (free) starting town last (that’s a variant that we always use instead of starting player and choosing home town first, why??)

Here is our table order:

I rolled a random event, and starting player is: Matt We draft always in clockwise order.

This means, we chose our starting towns now in different regions: me, then Dave, then Matt.

My starting town will be in Northern Ui Neill. red town south east, I will update the real board later today.

don’t start the drafting, until I reveal the number of vikings later. But here is our starting hand of 8 cards.

OK, I’m ready. I watched Rodney’s rules video, then some of Paul’s playthrough, then skimmed the rulebook.

Could you add an image to the OP showing a close up of all the claim tokens?

Is clockwise down the list? i.e. do I pass to Dave?

I’ll plan to play my drafts like this, with “facedown hand” representing those passed to me on previous drafts that will form my play hand after the draft.

That way if things get screwed up, we can go back and check what happened.

Oh, right, duh. Thanks for the correction. Like this:

exactly. I wanted to wait until I reveal the number of vikings and marriage card for the first draft. So that you know how many red cards you want to keep, or yellow cards…

It is not critical though, there are usually 10 to 15 vikings raiding per round ;)

You can click on the spoilers in my posts above. Those aren’t my actual drafts. They’re fake numbers. Just wanted to work out the format before starting play. And… ahem… as it turns out… get the working of the draft done correctly.

let’s wait for @Dave_Perkins to choose his start town, then you can choose your start town.

how do you do that collapsing of the spoiler numbers. Is this a list tag? how?

You can choose “Hide Details” from the gear icon in the comment editor or with tags like this:

cool, that’s perfect. @Matt_W What claim tokens do you need? your green disks? We all have 25 disks… You will not run out of disks, I promise ;)

What claim tokens do you need?

I’ll choose green simply because it doesn’t match the color of any of the towns on the map.

true, could be. Start player is actual a slight disadvantage… anyway, claim your town in any region. And Dave, too. Then we can start